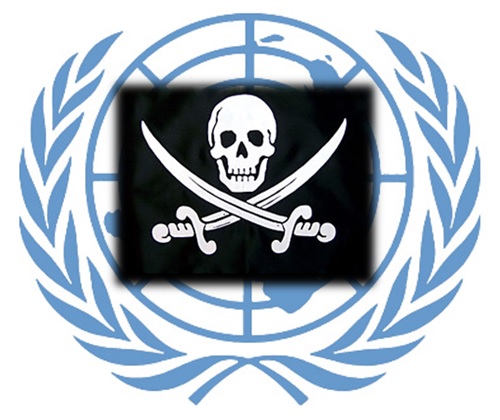 Pirate Takeover of the Administrative State

The power of the nation-state to deal with external threats is the military. The power of the nation-state internally is the Administrative or Bureaucratic State. Our Administrative State has been infiltrated and the infiltrators are attempting to impose policies through administrative regulatory systems that are foreign to the American systems of government, the American people and our way of life. At the center of those foreign policies is the United Nations which sits on the East River in Manhattan within the jurisdiction of the New York/New Jersey Port Authority.

Last September there was a major spill of toxic mine waste into the Animas River in Colorado. A man named Mathy Stanislaus was in charge of the EPA clean-up site. Mathy was not in any way qualified to oversee a western mine clean-up operation. He was put into that position as many have been put into position within our government because of their affiliation with the United Nations. Their loyalties are to the United Nations and that’s their agenda. It’s more complicated than this, but one could think of it as a colonizing operation – the attempt to implement a colonial management system within the Administrative State.

Mathy was in charge of the Gold King mine cleanup that spilled toxic mine waste into the Animas River in Colorado. You can read his biography HERE. The following is an excerpt:

Mathy Stanislaus was nominated by President Barack Obama for the position of Assistant Administrator in EPA’s Office of Land and Emergency Management (OLEM) on March 31, 2009 and began in his service on June 8, 2009 after confirmation by the U.S. Senate.

He received his law degree from Chicago Kent Law School and Chemical Engineering Degree from City College of New York. He was born in Sri Lanka and his family immigrated to this country to seek freedom and opportunity.”

Mathy is just one example because our government is filled with United Nations people pretending to be Americans. They may have gone through the naturalization process, they may have Americanized their names, they may have taken diction training but none of that makes them Americans – and especially when they are engaged in covert and subversive occupation of the American government. That makes them international war criminals.

Here are two screen prints from the Employee Directory on the website of Health & Human Services (HHS). I’ve written about it several times over the years, but this morning after a couple of screen captures followed by a problem with my machine that took a reboot to fix, and the Employee Directory disappeared. It doesn’t matter though. I did capture two pages of it:

It’s a corporate notion that all countries of the world could be managed by a professional management staff implementing governance policies of global bodies through regional organizations assisted by the private sector – or what John W. Gardner called the Independent Sector (non-profits). It is a system designed for colonial rule.   This managerial, administrative system exists outside of our elected representative system of government effectively making our elected government merely a facade with the colonial managers acting as the puppet masters.

It’s not possible for me to bring forward in this article all of the documentation I have on the construction of the colonial Administrative State.   For the sake of brevity, the takeover started during the tail end of the Bush 41 Administration and all through the Clinton Administration. The Clinton-Gore “reinvention of government” was an all of government project to redesign government systems to be replaced by the managerial, administrative state. The idea that they could do it no doubt derived from the fact that large corporations manage vast numbers of resources – including human resources – across great distances through their corporate computer systems.

The Workgroup that Mathy Stanislaus chaired in 1997 was a Clinton-Gore Workgroup for the reinvention of government project to redesign the systems of government to fully utilize the capabilities of the Internet.  The EPA partnership with the United Nations no doubt derived their ostensible authority from the La Paz Border Environmental Cooperation treaty (TIAS 10827) signed with Mexico in 1983. They operate under international law as long as they are within an international port district under maritime law (either inland port or seaport).

The pirate occupiers also counted on secrecy. The United States government has been operating behind a curtain of secrecy since 1947 (National Security Act) supposedly because of the Cold War but more likely so that they could build up the United Nations organization for the big moment – the imposition of the global governance system through a system of colonial, shadow government rule.

The takeover was planned for right about the time the baby boomers were close to retirement. Tens of thousands of American government employees were either released or were allowed early retirement. Those government employees – and in particular, the Information Technology employees were replaced by foreign IT workers.   There was no shortage of Americans to take those jobs because the baby boomers did have children and computer systems do reduce staff requirements. It was a choice made by traitors to the American people to facilitate the takeover of the American Administrative State by foreign operatives representing a foreign power.

Last summer there was an issue in Idaho regarding Idaho’s participation in an international treaty in violation of Article 1, Section 10 of the U.S. Constitution. The legislation was written by the Uniform Law Commission out of Chicago.   The legislation called for recognition of the Hague Convention on International Recovery of Child Support and Other Forms of Family Maintenance.   The legislation authorizes state courts to recognize international child support orders from foreign countries without judicial review.

The propaganda campaign for this legislation focused on errant parents who left their families in foreign countries to come to the U.S.   In Congressional testimony however, it was admitted by Vicki Turetsky of the HHS that international child support cases were not a big issue. They were just planning for the future.   And that future was without doubt, the establishment of a system of convenience for pirate occupiers within the U.S. government.

During the battle on that legislation, it was discovered that there are 113 attorneys operating within the Idaho State government – embedded within the agencies of government. When Butch Otter called a special session of the legislature to vote on this legislation, it was apparent that the people of Idaho were not represented at the legislative hearing that preceded the vote on S.1067/HB1 and it was noted at the time in the following articles:

The Legislature and the Sob Sister Circus

The analysis is that in addition to foreign IT people, the strategic plan for the takeover and conversion of the American government to a managerial, administrative state under colonial rule, included lawyers – either real or pretend with fake credentials to “speak the law” to state government – and probably county government officials – again relying on obedience to authority and reflexive response to spoken law.

The Jig’s Up – The Dance is Over

Nobody could have predicted the trigger. The Hammond Case and Ammon Bundy’s leadership in exposing it just put Harney County out there in the lead in reclaiming the American government for the American people. Our job now is to follow in the footsteps of Harney County and do the same within our own counties and our own states.

To the pirates of the Administrative State, our best advice is for you to leave the country now while you still can because we are not going to surrender our country to you. And that’s a promise – not a threat.