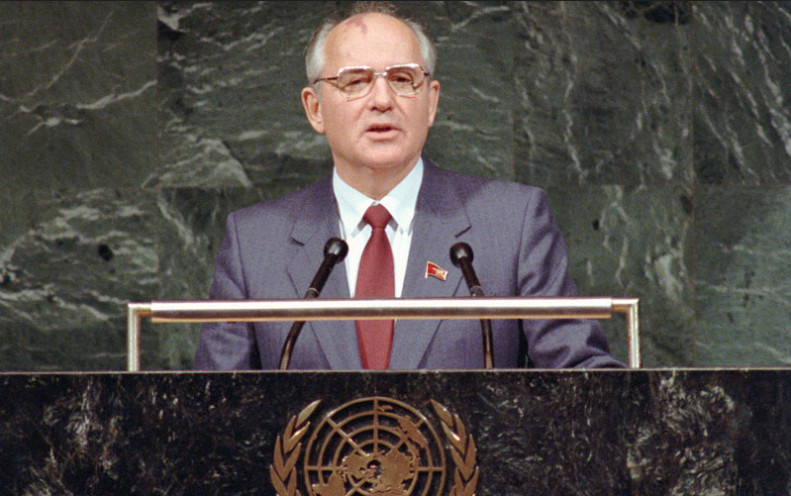 On December 7, 1988, Soviet Premier Mikhail Gorbachev, Chairman of the Communist Party of the Soviet Socialist Republics, gave his New World Order speech to the world from the podium at the United Nations.   This was over a year before George H.W. Bush gave his New World Order – Rule of Law speech which was in 1990.  The actual speech begins around 25 minutes into the video.  Click on the image to bring up the video on C-Span to watch it.

The Color Revolutions and global discord are the result of the Global Competition of Ideas and Systems – Project Democracy that was agreed upon between Reagan and Gorbachev.  The offer was extended by Reagan in 1982 and was accepted by Gorbachev in 1988.  Between 1982 and 1989, Secretary of State George Shultz coached, educated and advised Mikhail Gorbachev as Gorbachev acknowledged towards the end of his speech.

Mikhail Gorbachev’s speech was in response to a challenge issued by Ronald Reagan that he described in his 1982 Westminster Address.  Reagan attributed the idea of a competition to Leonid Brezhnev.

The following are the major points from Reagan’s Westminster speech that was to the British Parliament but it was directed at the Soviet Union – Mikhail Gorbachev:

The following are the major points from Gorbachev’s New World Order speech given in 1988.  The last one – the COMPETITION is the war we are fighting for the heart and soul of our country today.

Communism didn’t die, it metastasized.  Gorbachev came to the U.S. to the Presidio in San Francisco to help design westernized and modernized communist systems here.