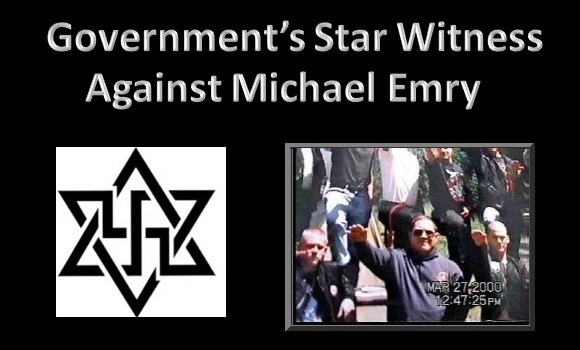 There is some serious Zio-Nazi ass-covering going on in Oregon today – Les Zaitz of OregonLive has unleashed a blitzkreig of lies on his Twitter account today. 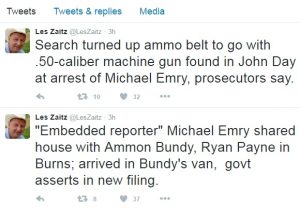 Here is a link to the original complaint filed.  As you can see, there is no belt for the chunk of iron in the box.

Now magically, two days after I exposed the government’s star

witness’ connections to the KKK, JDL and the FBI, all of a sudden a belt for the M2 is found?  The amateurishness of it is laughable.

And the second lie…   every minute of Michael’s time in Oregon has been accounted for – and there are motel records and witnesses to prove it.  Ammon Bundy did loan Michael an SUV for the trip to Oregon for the rally because Michael’s car wasn’t working very well – and Michael had all the camera equipment.

What I do know is that Ammon Bundy and Ryan Payne stayed out at the refuge.  Michael was in town at the Silver Spur with all the rest of the reporters.   Michael had nothing to do with the occupation of the Malheur National Wildlife Refuge.  He came to Burns to cover the rally on January 2nd, 2016 and he stayed to cover what happened after the rally.

If the U.S. Attorney Nathan Lichvarcik did in fact, file a superceding indictment with a magically found belt, it proves that he has no integrity and these latest accusations are a clear sign of desperation.

Update:  Apparently there was some kind of wire belt that held a few blanks.  Presumably it was not included in the complaint because it did not further the prosecutor’s case and in fact would have supported Michael’s contention that he brought the gun to Oregon to show Marc O’Dell and Harry Stangel his workmanship because O’Dell was leading Michael to believe that they wanted to go into business as a legal gun dealer and manufacturer.