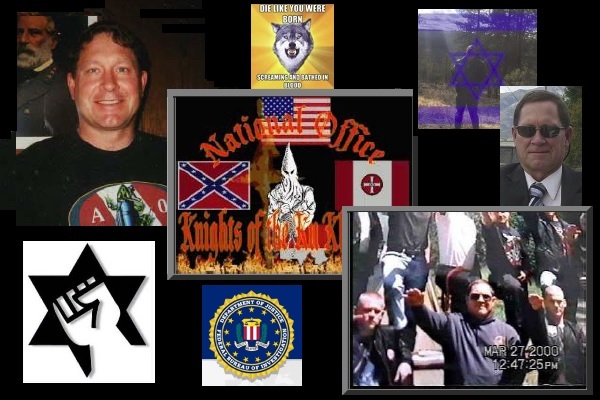 [Editor’s note: If you are not familiar with Michael Emry’s story, links to all stories written are at the bottom]

A couple of days ago, Michael Emry called to tell me that his second pretrial release hearing had been postponed until Friday, July 15th at 1:30.  The Judge had a scheduling conflict and the alternative to postponement was to have another judge hold the hearing.  Michael’s attorney told him it was better to postpone because it gave him more time to go through the discovery documents.  I also think it’s a good thing because I’ve been doing some discovery of my own in a manner of speaking.

Michael’s first pretrial release hearing was on May 23.   On May 28, Les Zaitz, “investigative reporter” for OregonLive wrote an article quoting from what the U.S. Attorney Nathan Lichvarcik said about Michael.  When Lichvarcik said these things, I’m sure my gasp was audible and Becky – stifling a scream ran out of the court room.   I was in shock because everything Lichvarcik said was a lie – and I knew he had absolutely no evidence for any of it. His entire statement was a fabrication.

May 28, 2016 ‘Weapon of war’ destined for occupied refuge, prosecutor says

The machine gun, the prosecutor said, is “capable of killing a person from over a mile away, taking out the engine block of a vehicle, shooting through a brick wall.”

And Michael R. Emry’s intent, he said, was to get the stolen .50-caliber gun to the Malheur National Wildlife Refuge occupation.

The prosecutor made the disclosures but provided few details during a federal court hearing this week in Eugene. Emry is being held on federal weapons charges.

…The militants who took over the refuge Jan. 2 maintained security patrols outfitted with side arms and rifles. The machine gun probably would have been the biggest weapon there had Emry succeeded. The .50-caliber gun, Lichvarcik said, is “a weapon of war” and “the silverback gorilla of the gun world.”

Lichvarcik said an informant told authorities about Emry’s plan to take the weapon to the refuge, which occupiers held for 41 days.

The informant was Marc S. “Doc” O’Dell as I revealed in The Entrapment of Michael Emry.  O’Dell is a life-long criminal who has so many victims that they set up a website both to tell their stories, collect all evidence in a central repository and to look for other victims.   I have a 296 page document with image copies and stories and hard evidence from his victims.  (Note:  I turned over this information to Michael’s attorney and to law enforcement.)

The big question for me was always, why did Doc O’Dell set Michael up?   Michael wasn’t doing anything that should have put him on anybody’s radar.  O’Dell could have done it for money because the FBI pays informants but when one looks at the MSO file – evidence collected by the victims of O’Dell, it brings to mind another possibility.  (MSO = Marc S. O’Dell).

It turns out that Marc S. “Doc” O’Dell in addition to being an FBI informant, was a Grand Dragon of the KKK in Virginia.   But it gets better because O’Dell was also working for the Jewish Defense League.

This is an image from the MSO History file that was apparently the front page of the forum: 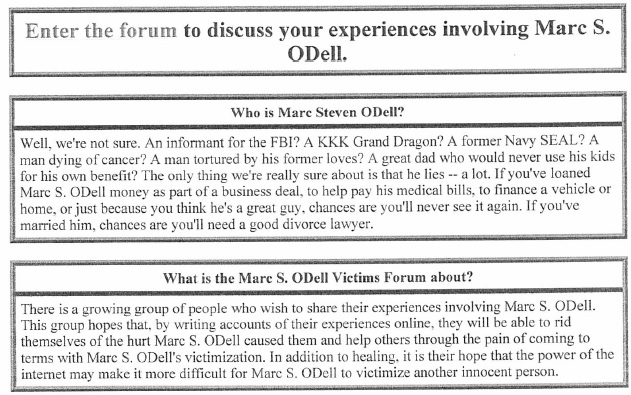 The following is an excerpt from a letter written to law enforcement by O’Dell’s seventh wife.

Here is an excerpt from a report about a phone conversation with FBI Special Agent Robert Elliott: 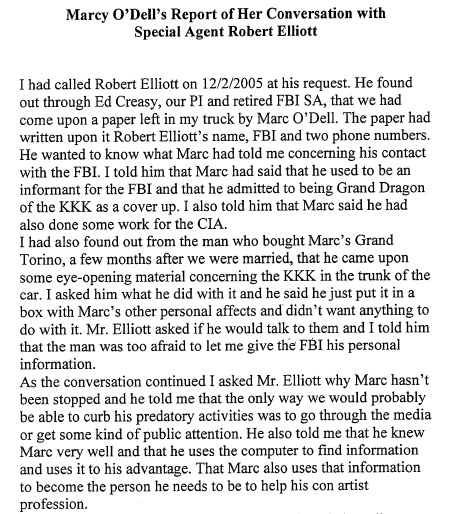 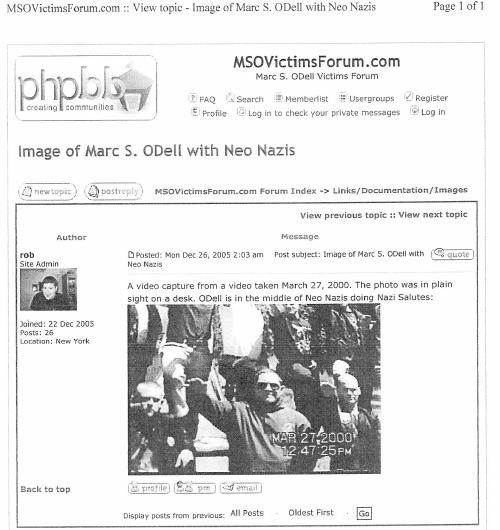 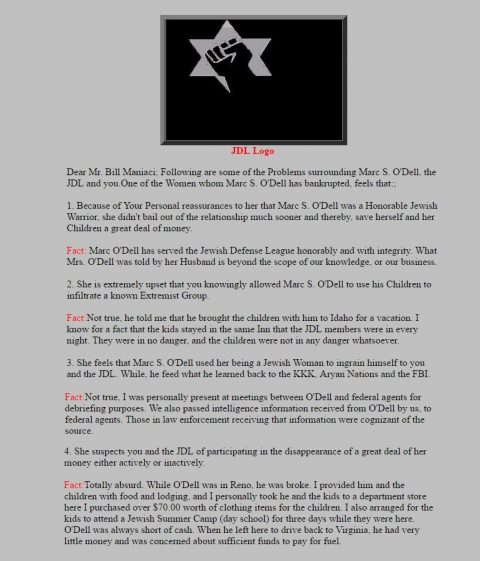 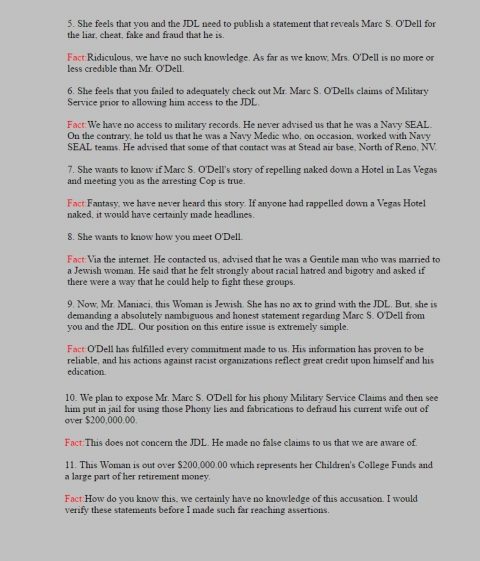 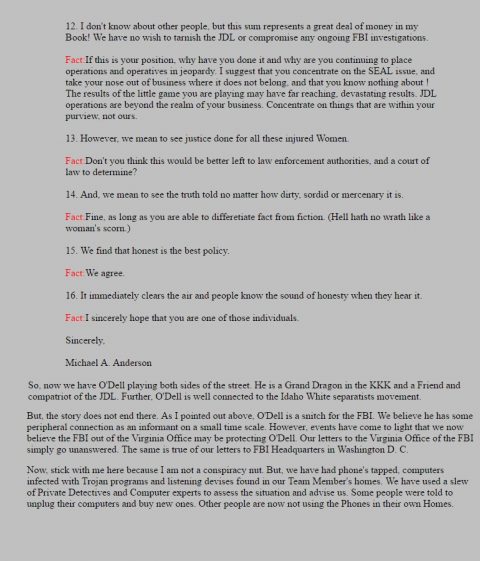 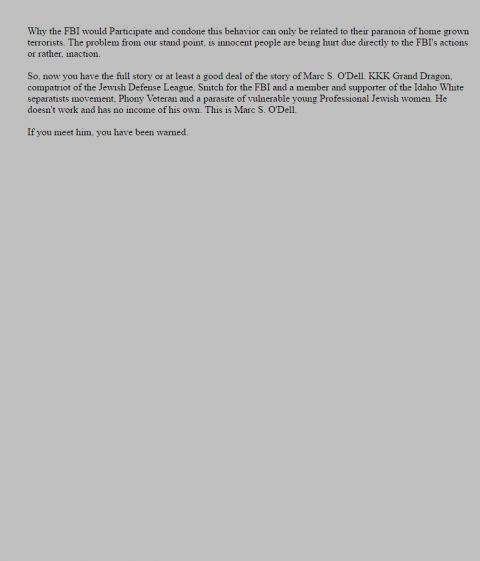 So isn’t that interesting?   The Jewish Defense League works with the FBI and their operatives lead KKK groups of skin heads.

When Michael was telling me about Marc S. “Doc” O’Dell, he told me that there was a pod of skin heads that live on or close to Harry Stangel’s ranch where O’Dell lives.  What that told me is that O’Dell was up to something.

Add to that, Les Zaitz, the “investigative reporter” is also the president of the Grant County Economic Council (GCEC).   The GCED is – or was, the dba name for the Institute of Conscious Culture.  The idea of Conscious Culture is transformation of the culture.

The young people who participate in these festivals are culturally confused “trendies” that become social justice warriors championing the cause of cultural cannibalization.  They think they are free spirits – the 21st century version of hippies but what they really are – are dupes for an agenda that very likely, they don’t even understand. 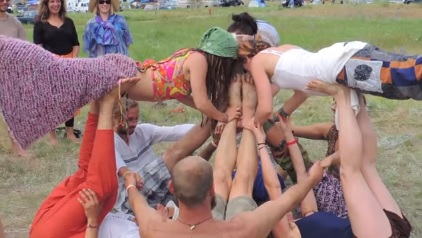 Recall that when Lou Dobbs interviewed Les Zaitz, Zaitz said that he was so busy investigating the people at Burns and out in the desert, that he didn’t have time to look at the corrupt politicians who did nothing to help the Hammond Family.  And yet, Zaitz completely missed a KKK Grand Dragon and a pod of skin heads in his county.

This is speculation on my part, but it makes me think that Michael inadvertently walked into what would have been a false flag, staged game scenario like the one that happened in Sacramento, California.

7 stabbed at neo-Nazi event outside Capitol in Sacramento

These kinds of events are being staged all over the country for the purpose of destabilization. The objective seems to be to stir up a civil war – which justifies militarization of the police. The problems created are bigger than the local police can handle.   Local police ask for help and they get mercenaries – Private Military Contractors.  Its really quite a clever way to “privatize” the police as our country is being dismantled and occupied.

From the beginning of this story, it was obvious that Zaitz, the FBI, the prosecutor and no doubt the judge thought they were going to have a big time terrorist to try.  Big time cases are career builders for participants in the Justice System – and that includes defense attorneys.  The judge made sure that Michael had a good attorney rather than a public defender.  The conviction of Michael was going to be a notch in the gavel of a new judge – a prize case for the resume.

Instead, what they got was a middle-aged man who had no criminal record except in connection with helping to put a drug dealer in jail and who was in obviously desperate financial straits.  The carrot of a legitimate business opportunity was dangled in front of Michael and he seized it. It was a set up from beginning to end making Michael yet another victim of a corrupt system that hires criminals to set people up. 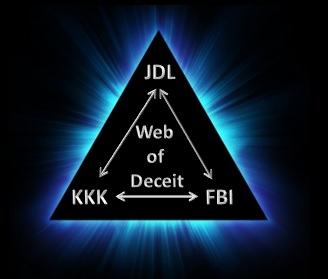 Michael’s Pretrial Hearing will be at 1:30 on Friday at the Federal District Court in Eugene.

If you are in the area, stop by and show some support for Michael.  We will be there around noon on Friday.