The Entrapment of Michael Emry

Below is the picture of what the FBI found on the day the search warrant was executed.  I previously reported that this was a parts kit.  It’s not a parts kit.  It’s in a parts kit box.  It is however, not a functioning machine gun.  It’s missing the cocking handle – and it’s damaged which is why it was in Jim Weaver’s shop.  As it is shown in the picture, it is not an operable gun. 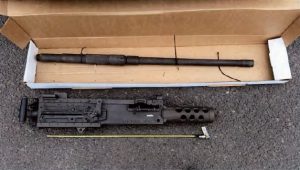 The picture below is a fully functioning Browning M2 machine gun.  On the right, there is a Vicker’s Tactical video demonstration of the M2. 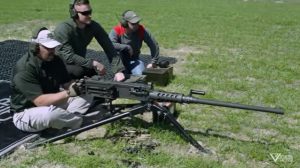 At about the third meeting of the Committee of Correspondence, Michael was approached by a member of the Committee of Correspondence who was interested in guns.  The member’s name is Marc ‘Doc’ O’Dell.  It was not known at the time that Doc O’Dell was Marc S. O’Dell, a felon with a criminal history longer than an orangutan’s arm.  O’Dell was living on the ranch of Harry Stangel, who is a rancher – but who rumor has it, is retired law enforcement and it would seem – O’Dell’s handler.

Michael told me that he and O’Dell talked a lot about guns, Michael’s experience and the requirements to get a Class II license to go into business.  O’Dell told Michael that the ranch had a building on the ranch that could be used as a shop.  O’Dell invited Michael and Becky out to the ranch and took them on a tour of it.   It’s not hard to imagine that Michael was pretty excited about the possibility of going back into the gun building business – which is a perfectly legal business as you can see from the Vicker’s Tactical Video.   To verify that, I called the Twin Falls Sheriff’s office to ask a deputy if it was legal to have a Browning .50 Cal machine gun if it is semi-automatic and not fully automatic.  He said it was legal.

At some point, O’Dell told Michael that Stangel wanted Michael to make a gun for him.  It’s not known to this writer what caliber of gun Stangel wanted but Michael went to Boise to get the .50 Cal to be able to show Stangel the quality of Michael’s workmanship in terms of the welding of the rivets and whatever.   Michael didn’t steal the gun.  He borrowed it from Weaver’s shop to show to Harry Stangel who would have been the Class II license holder and the money man for the shop to build guns.

When Michael worked in the shop for Jim Weaver and they did gun shows, Michael said he always brought that .50 Cal for show and tell.  Even though they weren’t doing gun shows anymore, he had a key to Weaver’s shop and he let Michael use it whenever he wanted.  Several times, Michael talked to me about setting up a feature section on the The Voice of Idaho website for guns, gun sales and video demonstrations and discussions.  We never did it obviously but it was an idea on the table for the future.

Michael wanted to show the .50 Cal to Stangel but O’Dell kept putting him off.  At some point O’Dell changed the name from Harry to Larry somebody.  Then when O’Dell asked Michael to make the gun fully automatic, Michael knew he was being set up.  He told O’Dell hell no and that he wasn’t going to do anything for O’Dell, Harry, Larry, or anybody else.   Michael said he knew after that, it was just a matter of time because after that, he knew he was being followed.  It was at that point that he panicked and scratched off the serial number to try to protect his friend Jim Weaver.

When I began writing this series on the arrest of Michael Emry, a local from Grant County provided information to us about Marc S. “Doc” O’Dell, the guy who set up Michael.   I received a 26 MB file on O’Dell.  He has left so many victims in his wake that they set up a website for the victims to tell their stories.  It’s stunning.

Zoom Info has a profile on Marc O’Dell that is active.  It really only scratches the surface of Mr. O’Dell.

Marc S. O’Dell hails from Partlow, Virginia. He is between 45 and 49 years old depending on which date of Birth he uses. Among his lies, he claims to have seen action in Vietnam, South America, and Desert Storm (including Special Ops in the sewers of Kuwait). He has told numerous people including ex-wives that he was a United States Navy SEAL.
…

We are now aware of no less than six marriages for O’Dell. We don’t currently know how many were legal, but we’re working on it.

We have just received confirmation that Marc S. O’Dell was turned into the FBI and convicted of stealing while in the Navy Reserves. He received a DISHONORABLE DISCHARGED in 1993. Now, why am I not surprised?! This PHONY VETERAN’s lack of honesty and character runs deep.

UPDATE: June 11, 2000.We have just confirmed that another means of support for Marc S. O’Dell’s is derived from telling hard luck sob stories to Women, obtaining “loans” and never repaying them. He bilked his MotherinLaw out of $6,000 in May 25, 1999, to keep from being arrested for nonpayment of child support, with the promise to repay it by August 15, 1999. He has made no attempt to repay this “loan”. Surprised?!

At one point in time, there was a website called the MSO Victims Forum.  The only thing that remains is a webpage from a website called daWhoIS.com   I don’t know if somebody was trying to set up a newer version of Who Is?  but I’m including it here because it had to be the original source of the 26 MB file on Marc S. O’dell.  I’m not posting that file because it has a lot of names and personal information in it but I am distributing it to various people I know for safekeeping – including to law enforcement (one of the good ones). 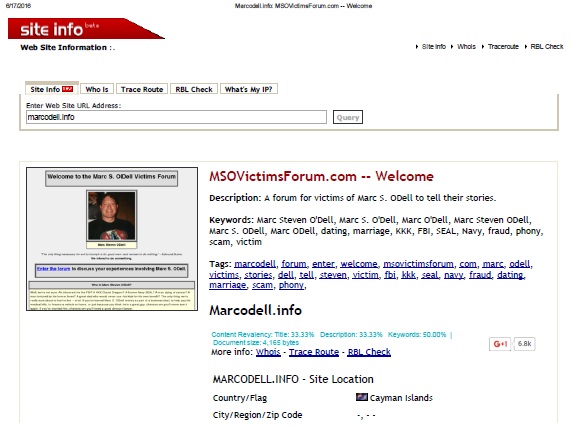 Phony Veterans –  2003 from the Internet Archive

On a website called Fake Warriors, a division of the POW Network, there is another, more current story about Marc S. O’Dell.  In 2011, KATU in Portland, Oregon did a story titled, AG investigates charity claiming to help sick women, kids by Kerry Tomlinson.

Now O’Dell is a Marine?

On the Blue Mountain Eagle website, there is a picture of a Marine Reunion.  The picture includes Harry Stangel and Marc S. “Doc” O’Dell.

Curiously, there is another picture of Harry and Robyn Stangel in North Carolina posing with a copy of the Blue Mountain Eagle newspaper.  How many people do you know that go on vacation with a local newspaper and pose with it?   They must be very close friends with the Blue Mountain Eagle people which would have been who?   Scotta Callister – Les Zaitz wife.

Michael Emry was not on the radar of the FBI for anything.  He was doing nothing wrong in Grant County.  When he was talking to O’Dell about going into business and getting a Class II license, he wasn’t doing anything wrong.  The mistake Michael made was to bring the non-functioning body of a Browning M2 .50 cal over the state line into Oregon.  If he had made O’Dell come to Idaho to see it, it would have been perfectly legal to show it to him.

Michael let O’Dell take a picture of it to show Harry Stangel.  What O’Dell did with that picture was to sell it to the FBI.  The whole thing was a set up – entrapment – from beginning to end so now, a good man sits in jail while O’Dell is free to roam the streets looking for his next victim. 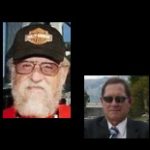