Home Michael Michael Emry: A Notch in the Gavel of a New Judge – Part 2 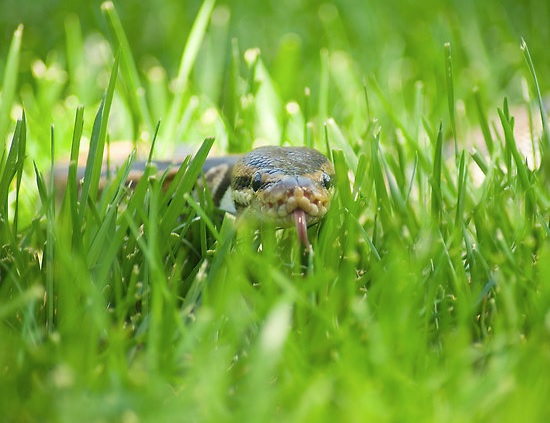 Michael Emry: A Notch in the Gavel of a New Judge – Part 2

Michael Emry arrived in Burns, Oregon on January 1, 2016.  He was there as the embedded reporter for the Idaho III% to cover the rally showing support for Dwight and Steven Hammond that was to be held on January 2nd.  The Hammonds were ordered to turn themselves in to U.S. Marshals on the 4th to serve their second terms in prison for crimes they didn’t commit.  Through a procedural trick in the law combined with prosecutorial abuse of power, they were convicted of being eco-terrorists which carries with it a mandatory minimum sentence of five years in prison.  The first judge in the Hammond case refused to impose the mandatory minimum because it was a violation of Article VIII of the Constitution:

Excessive bail shall not be required, nor excessive fines imposed, nor cruel and unusual punishments inflicted.

He gave them a sentence of 3 months and 1 year respectively.  The prosecution appealed the sentences to the Ninth Circus Court of Appeals that then ordered the Hammonds back to jail to complete the full five year sentences.

After the rally, the occupation of Malheur Refuge was announced by Ammon Bundy.   Nobody but Bundy’s closest circle was prepared for a takeover of the Refuge least of all TVOI News.  Michael stayed in Burns to cover it even though it was very difficult.  It was TVOI’s first big story that required an on-ground-presence which is very expensive.   There was a mad scramble for donations both for expenses and equipment upgrades just to be able to do it.

The occupation ended with the murder of LaVoy Finicum on January 26th at a roadblock on U.S. 395 between the towns of Burns and John Day, Oregon.  Ammon and Ryan Bundy, LaVoy and several others were headed for a community meeting in Grant County that was organized by a logger named Tad Houpt.   It tends to get lost in the human drama of the Bundy’s occupation of Malheur, 2014 Nevada standoff and the murder of LaVoy, but the central issue and cause of the growing dissent is the government’s policies of economic and cultural destruction of rural America.

The eastern part of Oregon defines rural.  There are thousands of acres of open space with very few people and they suffer from a dearth of information – both coming in and especially getting information out.  They don’t have the quality of high speed communications that is readily available in most places and their printed news is basically a tabloid that is published once a week.   Michael saw that as an opportunity to help them establish their own media operation similar to The Voice of Idaho News (TVOINews.com) so he stayed in Burns and continued to meet with the Committee of Safety that was organized by Ammon Bundy before the occupation.

On February 11, 2016, the story moved to Grant County when the manager of the Emergency Communications Center, Valerie Luttrell, filed a complaint against Grant County Sheriff Glenn Palmer.  Sheriff Palmer is a constitutional sheriff and very popular among the rural residents of Grant County.

On February 18, 2016, Les Zaitz of the Oregonian wrote an article in which he quoted an unnamed dispatcher to say, “I felt uncomfortable knowing that I had to relay vital and confidential information to someone who may not be trustworthy”.  The someone she was referring to was Sheriff Palmer.  For a dispatcher who is low man on the totem pole to make a statement like that is evidence of a conspiracy against Sheriff Palmer.  She stepped way out of bounds for her position.  She wouldn’t have done that without political backing source unknown – and cover provided by Les Zaitz.

Towards the end of February, Becky joined Michael in Oregon.  During this time, they were not only working on the issue of media, they were trying to figure out what they were going to do personally.  They were liberated from Boise and for personal reasons having nothing to do with Malheur or media operations; they didn’t want to go back.

At some point in March, Michael began working with Ted Houpt and a group of people in Grant County.  They were interested in forming a Committee of Correspondence that would work in cooperation with a new media platform provided by Michael.   The purpose of the Committee was to both review the mainstream coverage of issues in the area and to report on events and issues from the perspective of the rural residents of the area.  The decision to establish The Voice of Grant County Oregon in conjunction with a Facebook page of the same name was made in the last week of March.  On April 3, 2016, hosting space for the website was purchased and I began building the website.   It was at that point that Les Zaitz began stalking Michael and other members of the Committee of Correspondence – trying to get somebody – anybody to talk to him.

Between Les Zaitz’ position at the Oregonian and his interest in Malheur Media, LLC along with his wife Scotta Callister and his brother Lyndon Zaitz, they pretty much have a media monopoly in rural Oregon.

In an article posted on the Malheur Enterprise website, there is an announcement that the trio purchased the Enterprise in October of 2015.  The Malheur Enterprise is the newspaper of Vale, Oregon in Malheur County.  The article said that Callister was the retired editor of the Blue Mountain Eagle in John Day and Lyndon Zaitz is publisher of the Keizertimes, a community weekly paper outside of Salem.

This is a map showing the terrain between Vale, Oregon and Salem. 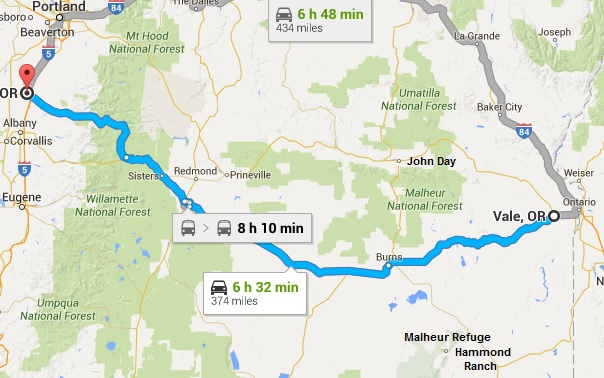 On April 5, 2016, Les Zaitz sent an email to The Voice of Idaho requesting an interview. 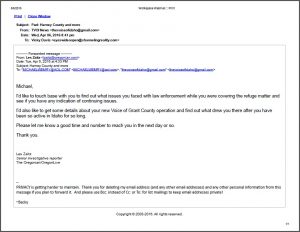 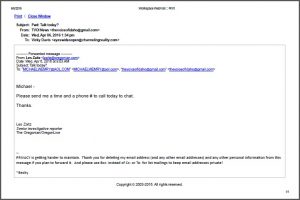 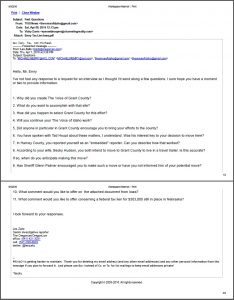 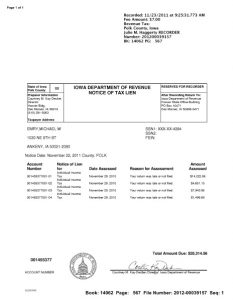 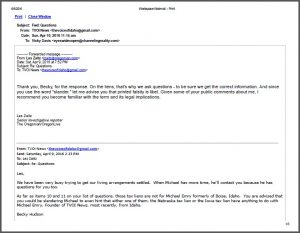 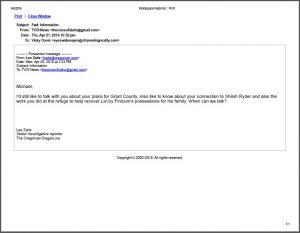 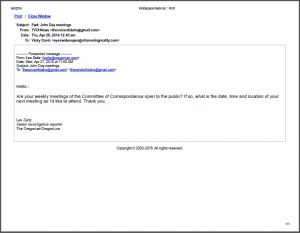 I was told that Les Zaitz was hounding other members of the Grant County Committee of Correspondence as well but Zaitz’ most high profile target is Sheriff Glenn Palmer.   Sheriff Palmer had to complain to the local prosecutor causing the prosecutor to warn Zaitz to not call him at his home and to stop hounding Sheriff Palmer.

After the email containing the blackmail threat, TVOI News began their own investigation to try and figure out who is Les Zaitz really.   On the first search, I found out that Les Zaitz is President of the Grant County Economic Council.  That was an ‘ah ha’ moment which is why I wrote Metro Makers at the Door (published April 28, 2016).

Rise of the Pagans

I didn’t know what Conscious Culture was so I had to do a search on it.  Here are some resources so you can see for yourself:

This one has videos so you can see the culture warriors

I’ve done fairly extensive research on Economic Development in Idaho.  That research was done as a result of a complaint by a resident of Star, Idaho, a small rural town outside of Boise.   The corruption that I documented in Star parallels the corruption I’ve seen in Grant County.    For the record, Economic Development is a government program that began in the 1960’s as part of the Great Society.

Carnegie Foundation President John W. Gardner was the Architect of the Great Society and the Economic Development Administration was created as part of it.   What has happened however is that a network of International Economic Developers have embedded themselves in our community colleges and universities and into the system of Economic Development.  They tap into all grant and funding programs intended for the American people – not imported foreigners.  With the foreign money comes foreign occupation of our small rural communities.

The purpose that the “mainstream” media plays is to normalize it – play it as if it is perfectly normal for large populations of foreigners – including Muslims from the Middle East and Africa to move into small towns in Idaho.   And as we recently found out by looking at Les Zaitz and the Grant County Economic Council, it’s coming to rural Oregon.

There is a formula plan that has been replicated and used all over our country.

First they kill your economy to increase the poverty rate:    Distressed Areas in Oregon

And then they establish EB-5 Regional Centers to get foreign money by selling American citizenship.  The foreign investment money is directed to the commie-connected and created by the Economic Developers that are designed to put American businesses out of business – with a few exceptions.  The exceptions are show ponies that the media uses to show that everything is still normal and if you aren’t winning in the global economy – it’s just because you are a loser.  And you are a loser because you can’t compete with a subsidized business that is designed to put you out of business.

When this conversion starts to happen, a lot of economic development money flows into an area and the local politicians either feed voraciously at the trough – or they are run out of office as in happening to Sheriff Palmer.

It may seem that I’ve veered off Michael’s story but I haven’t.  It’s just that the story is so much bigger than the story of one individual.  Michael was in Oregon to establish a media operation to help the people of Oregon to be able to understand what is happening to their area and for them to be able to report to the rest of the country what is happening by establishing a Committee of Correspondence.   That’s the real reason Michael is in jail – not because he was doing anything that should have drawn the attention of the FBI.   Michael was set up.  The FBI’s attention was called to him by somebody who really didn’t want new media in the area.