Last night, PBS did a story on Ukraine and the war Ukraine is having with Russian-backed separatists in the Don Bass region.  Journalist Nastya Stanko was interviewed for the story. 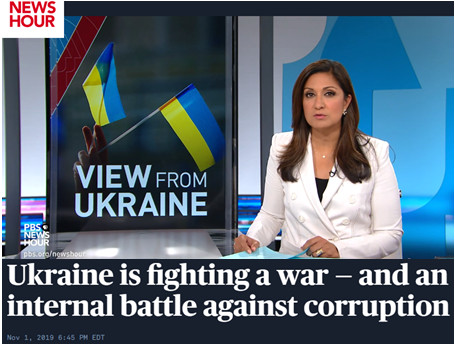 The part of the story that captured my attention was when she mentioned secret compounds in connection with the Ukrainian Security Service (SBU).

You know, once, I here covered this story about secret compound in the east part of Ukraine, and Secret Service called me, like, the enemy.

And they called me that, I shouldn’t, like, cover these stories. And also, many like trolls, they wrote me, like, messages that I should be in this secret compound, in this secret prison also, because I do wrong things.

In the interview, Stanko said that the Biden corruption story is not a big issue in the Ukraine.  I did find that the producer of the documentary did write an article about it.

Biden, Shokin, and Zlochevsky: How the Burisma Case Unfolded

Key points in the article:

One of the largest private gas producers in Ukraine. It is owned by Mykola Zlochevsky, the former Minister of Ecology during the presidency of Viktor Yanukovych. Licenses for the development of gas fields to Zlochevsky’s firms, in particular to Burisma, were coordinated by the ministry, which he himself headed.

Burisma’s board of directors boasts former Polish President Aleksander Kwa?niewski, and until April 2019, according to The New York Times, it included the youngest son of former U.S. Vice President Joe Biden.

What Was Burisma Suspected of?

How Did It End?

On September 13, 2016, the Pechersk District Court ordered the Prosecutor General to approve termination of the search for Zlochevsky.

The Prosecutor General’s Office closed the case of tax evasion.

The money laundering case was lost by Zlochevsky in a London court. And the case of misappropriation of public funds – for actually issuing licenses to himself – was transferred to the National Anti-Corruption Bureau of Ukraine (NABU) where it was subsequently closed, the Prosecutor General said.

Why Didn’t the Story End There?

On January 23, 2018, the former U.S. Vice President Joe Biden spoke of how in 2016 he demanded that Kyiv dismiss the former Prosecutor General Viktor Shokin at the discussion panel of the Council on Foreign Relations in Washington.

If the prosecutor’s not fired, you’re not getting the money. Well, son of a bitch, he got fired, And they appointed the one who was befitting at that moment.”

On May 7, 2019, Bloomberg reported that Trump’s lawyer accused former Vice President Joe Biden of pressure on the Ukrainian government . . .  Giuliani also planned a visit to Ukraine. Sergii Leshchenko, then MP, said Trump’s lawyer was going to come to gather incriminating evidence on Biden. Leshchenko also demonstrated a document that, according to him, was passed by Lutsenko’s entourage to Trump’s lawyer. . .  It read that in March 2014, through lobbying channels, the former Minister of Ecology Zlochevsky allegedly invited U.S. Secretary of State John Kerry and Vice President Joe Biden to distribute profits at Burisma. This money was allegedly paid to Biden’s son and a friend of Kerry’s adopted son, Devon Archer.

In 2018, at the “Charitable Ukraine–2017” competition, the Burisma Group won the Big Business’s Charity nomination.

In May 2019, Zlochevsky held the fourth Energy Security Forum in Monte Carlo.

After a string of brutal murders, Donbass leaders are worried that someone very powerful wants them dead.

Arsen Pavlov was no stranger to extreme violence.

This Russian commander, better known by the nom de guerre “Motorola,” was a veteran of Moscow’s ruthless campaign in the Second Chechen War and later became a prominent figure in the ongoing conflict in eastern Ukraine, leading a battalion of Moscow-backed separatists.

The 33-year-old mercenary was assassinated in Donetsk by a remote-controlled bomb planted on his apartment building’s elevator. Pavlov and his bodyguard were both wearing full-body armor, but bloody remains and a jumble of ammunition were all that was left of them.

Pavlov is the latest separatist commander, and among the most prominent, to die in mysterious circumstances since the conflict first erupted.

Last month, the former prime minister of the LNR, Gennady Tsyplakov, purportedly “committed suicide” in detention after separatist authorities rounded up dozens of regime figures who were perceived to present an internal threat and accused them of plotting a coup. LNR officials claimed that he had hanged himself in his cell because he was so consumed with guilt over “the gravity of his crime.”

Earlier that year, Aleksey Mozgovoy, the founder of the Ghost Brigade, a pro-Russian militant battalion in the LNR, was killed in a roadside ambush of mines and machine guns in a stretch of land he regarded as his private fiefdom. Alexander Bednov, a commander known as “Batman,” was killed during an attack on his convoy on Jan. 1, 2015. And these are just the most notable figures; analysts say there have been at least a dozen more such deaths.

Evidence is hard to come by in the black box of Ukraine’s rebel heartlands, where the Russian-backed regimes of the LNR and DNR thrive off confusion, division, and mystery.

Pavlov may have qualified as an unruly subordinate. A former blue-collar worker from the Russian republic of Komi, he is said to have earned the nickname “Motorola” during his work as a communications officer in a Russian army battalion serving in Chechnya.

In March 2014, he crossed into Ukraine’s febrile, industrial east to join the growing insurgency and became the commander of the Sparta Battalion, which is based in Donetsk and has a reputation for ruthlessness. With his ginger beard, unhinged grin, and love of Russian rap and quad-bike joyrides around Donetsk, Pavlov became a wartime media star.

“He was just a media warrior,” said Mikhail Minakov, a political philosopher at the Kyiv-Mohyla Academy, a Kiev-based university. “The major figures remain in the shadows.”

A video quickly surfaced on social media that purported to show members of a Ukrainian neo-Nazi group claiming responsibility. The four masked men threatened to target other separatist leaders and ended the clip with a Hitler salute. Some separatists leaped on the suspicious footage as evidence of Ukraine’s involvement in Pavlov’s death; others discounted its authenticity, dismissing it as the latest salvo in a long-running information war.

Who might want Motorola dead? Many believe that it was one of his own. Feuds over the control of trade routes and contraband energy resources — namely Ukrainian coal and Russian oil — are common in the breakaway regions. Pavlov was said to have been involved in dealing scrap metal, a profession that the Moscow Times last week called “one of the few growth industries in and around the destroyed Donetsk airport.” By removing rogue competitors, eastern Ukraine’s ruling coalitions of rebel warlords and criminal syndicates could be seeking to tighten their grip on these underground and hugely profitable markets.

One of these figures was Alexander Zakharchenko, who currently heads the DNR and rose to prominence in April 2014 as the commander of a battalion that was formed from members of a fight club and went on to seize Donetsk’s government buildings.

In this video, Pete Santilli talks about the CIA using gaming environments and role-playing to activate operatives and operations.  I’m positive that he is right because of my own personal experiences but also when he mentioned Sean Smith, I knew what he was saying it’s true.  Why?  Because when I was trying to figure what happened at Benghazi, I found a tribute to Sean.  His handle was Vile Rat and this song was posted as a tribute to him.  When Sean was trying to get help for them at the compound, he reached out to his gaming community apparently because they couldn’t get any response from the State Department (Hillary) who should have responded to their SOS.

So why did I put all of these things on the same page?   Because there are parallels.  It’s the same game – one in the Ukraine; one in Benghazi; one in Oregon; one in New York and that’s just to name a few.  It’s a global game behind the curtain of intelligence and security.   It’s a Homescam.