Today, November 9, 2019 is the 30th anniversary of the fall of the Berlin Wall.  After World War II, Germany was divided into four regions.  The city of Berlin was divided into quadrants.  It was then reduced to a divide – East Germany and West Germany.  In 1961, a wall was erected to divide Berlin into East Berlin and West Berlin.  The dispute causing the divide was called the Cold War.  The sides were the communist world and the so-called free world.  Geopolitics – world politics were built on the east-west divide and international institutions established following World War II were built based on the divide.

On November 9, 1989 when the wall came down, foreign policy – the politics of the Cold War also collapsed leaving all countries with a void and a question – now what?

The take down of the wall was not entirely unexpected.  The exact date was probably not known, but it was known that the divide would end.  In 1975, the four powers of the Cold War plus some 31 other countries signed a treaty called the Helsinki Final Act (aka Helsinki Accords). 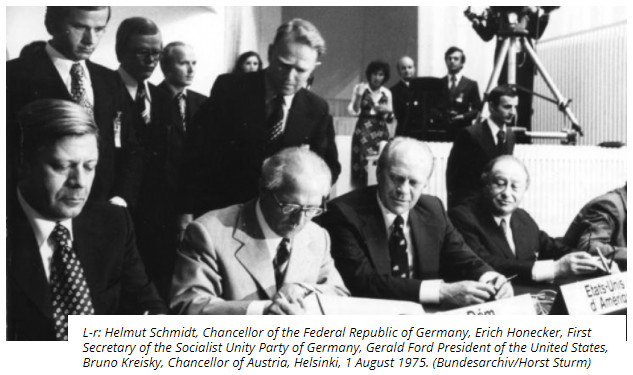 The Helsinki Final Act was an agreement for cooperation in three areas which were termed baskets of cooperation.  Cooperation in this context means harmonization of economic and social law for the purpose of ultimately establishing a global system of law over all countries.

The three baskets were:

Basket I – the Security Dimension – contains a Declaration of Principles Guiding Relations between participating States, including the all-important Principle VII on human rights and fundamental freedoms. It also includes a section on confidence-building measures and other aspects of security and disarmament aimed at increasing military transparency.

Basket III is devoted to cooperation in humanitarian and other fields: freer movement of people; human contacts, including family reunification and visits; freedom of information, including working conditions for journalists; and cultural and educational exchanges. Principle VII and Basket III together have come to be known as the “Human Dimension.”

On October 3, 1990, the divide between East and West Germany was dissolved and Germany was reunited.  CNN covered the event at the Brandenburg Gate on the day.  A video of the event is posted on youtube.

In 1989 after the fall of the Berlin Wall, the Council on Foreign Relations in New York commissioned a group of experts to write essays to answer various questions concerning their views on the meaning of the event and what their expectations were for world politics following.  On October 3, 1990 an event was recorded of three of the authors to present a summary of their essays.  The essays were compiled into a volume titled Sea-Changes: American Foreign Policy in a World Transformed. 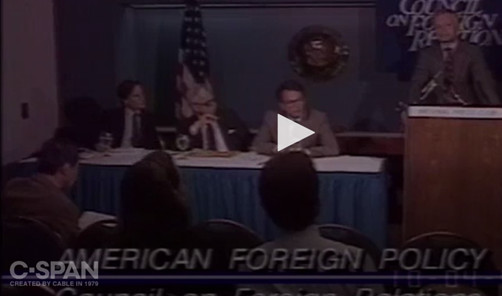 Note: there is an oddity in the above video. The date on it is 1990 but at the end, there is a question that includes events in 1992 and the response to the question includes 1993.

On May 2, 1990, Senator Claiborne Pell placed into the Congressional Record a copy of an article on America’s Role in the World written by Senator David Boren.  The article was published in the Washington Post.  The following are significant excerpts:

A different set of assets will be needed for a leadership role in the next century. Economic strength along with the moral force of America’s political and social example as a model for others will be more important. While we must remain prepared to deal with a variety of military threats, overall military strength will be less important.

Those who doubt that economic competition is more and more replacing military competition should examine what is happening in the intelligence field. An increasing share of the espionage directed against the United States comes from spying by foreign governments against private American companies aimed at stealing commercial secrets to gain a national economic advantage.

First, change the way we give foreign aid by giving more in the form of credits to be used solely to buy American products produced with American jobs. . .West Germany and Japan are following this policy.

Second, change the perspective of American embassies and missions to give greater emphasis to supporting our economic interests. We must recruit more people into the Foreign Service and intelligence agencies with economic skills and training. Right now, two-thirds of our embassies do not even have a commercial officer in the embassy to assist our businesses. When we do have a commercial officer, it is three times as likely that the official is a foreign national.

Embassies must be regarded as outposts to further our economic interests. . .

Above all, we must realize that we can’t afford to continue to rely upon the same foreign policy tools put in place by the Truman administration 45 years ago. A new world calls for a new vision for our role in it. It has been said that those who mill around at the crossroads of history do so at their own peril. It is urgent that we heed that warning.

Thus began the era of gangster capitalism.  State Department diplomats were replaced with economic hitmen with gangs (USAID) provided by the U.S. taxpayers.  The economic hitmen weren’t working for the United States, they were working for themselves.  The collapse of the Berlin Wall was the collapse of morality in western governments as the systems of corruption of the east were adopted by the west.

In 1993, Bill Clinton appointed Tim Wirth to be the Under Secretary of State for Global Affairs, a new bureau in the State Department.  On July 11th of that year, Wirth gave an address to State Department employees and to the world.  Nothing in what he said represented the interests of the American people outward towards the world.  On the contrary, he was announcing a global mission while soliciting and organizing an international advocacy movement domestically.

In his address, Wirth mentioned the Carnegie transition report.  A Carnegie report titled,  Science and Technology in U.S. International Affairs published in 1992 was found.  It’s not known if this is the report Wirth was referring to but since the subject matter corresponds directly with Wirth’s message and the time frame is right, it will do.

Backing up a little more to one day before the Berlin Wall was breached, Margaret Thatcher gave an address to the United Nations.  Her topic – global climate change as a new mission for the world.   There is no such thing as a coincidence in global affairs among governments.