Home Corruption The 1960 and 1990 Pivot Points to Globalization

The year 1960 was a milestone year in the destruction of our nation.  The U.S. Senate agreed to  outsource foreign and domestic policy (by boomerang) to an international organization called the Organization for Economic Development (OECD).  The predecessor organization was the region-building trojan horse –  the Organization for European Economic Co-operation (OEEC) established to carry out the Marshall Plan to rebuild Europe following World War II.  In 1960, the OEEC was reconstituted by CONVENTION as the OECD.  The OECD is region-building metastasized.

This nugget was discovered in the wrap-up of a speech given by Angel Gurría, OECD Secretary-General in a speech on the 20th anniversary of the fall of the Berlin Wall in 2009:

Free prices, free trade, free labour markets, privatization and competition transformed the economies of the Czech Republic, Hungary, Poland and the Slovak Republic. The multiyear efforts of economic stabilisation and structural transformation brought about large benefits. The four countries became magnets for foreign direct investment and a new growth pole in Europe. Inward FDI went from zero in 1990 to an average of about 61% of GDP in 2007. Real GDP per capita expanded more than twice as fast than in most OECD countries. Furthermore, accession to membership to the OECD and the European Union helped to lock in the progress achieved so far.

How did the OECD contribute to this progress? In the pivotal year of 1990, OECD members made a strategic choice to assist the historic transition process underway in what was then Czechoslovakia, Hungary and Poland. Within a year, the OECD established the Partners in Transition Programme (PIT), which served as an anchor in the uncertain early stages of transition. The OECD further engaged in Programmes for Russia, South East Europe, the Baltics and the former Soviet republics. OECD advice hopefully contributed to improve policy design and implementation in those countries.

Throughout our work, we learned that macroeconomic stabilisation can only be achieved if there is steady progress in the area of structural reform and institution building. Our advice in this field contributed to establish strong and effective competition policies and institutions in those countries. Not only that, nowadays, competition agencies in those countries are full partners with the OECD in the promotion of competition laws. With the opening of an OECD Regional Centre for Competition, a joint venture with the Hungarian Competition Authority, our work has expanded to the Central, East and South-East European regions.

This twentieth anniversary invites us not only to commemorate but also to exercise our freedom to think and reform. These are again challenging times that require to re-double our efforts to achieve a stronger, cleaner and fairer world economy. The experience of former communist countries and their achievements should be a source of knowledge and hope for our own future.

The OECD is living testimony of the value of these timeless words, of cooperating and working together for a better world. The road ahead is full of challenges. But it is also a road to progress that promises far better times for our countries if we get it right. It is a journey we look forward to travelling together.

There is a technical difference between a Convention and a Treaty but it’s not significant in terms of understanding how the U.S. Senate betrayed the American people by outsourcing 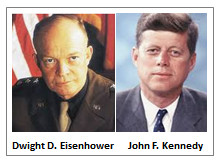 economic and social policy to an international organization.    According to the OECD website, the OECD Convention was signed on December 14, 1960 when Eisenhower was President and the ratification documents were received by the OECD on April 12, 1961 when John F. Kennedy was President.

Note:  Elaine Chao was present when George H.W. Bush announced the new transportation system for the United States in 1990.  The significance of the new transportation plan became known when the Trans-Texas Corridor Plan became public knowledge. See the right hand column of articles on THIS PAGE.  The following is from Elaine Chao’s webpage on her Peace Corp experience.

Elaine Chao’s tenure as Peace Corps Director coincided with a particularly eventful period in world history as the Baltic nations threw off the yoke of domination and the former Soviet Union Empire was imploding of its own weight. President George H.W. Bush nominated Elaine as Peace Corps Director in June 1991 and she was sworn in on December 2, 1991 . . .

With the advent of the dramatic rise of new emerging democracies in that part of the world, Elaine Chao established the first Peace Corps programs in the newly liberated Baltic nations of Latvia, Lithuania, Estonia and the newly independent states of the former Soviet Union to help its peoples adapt to the new free enterprise economic system.

Peace Corps is a U. S. government agency that sends young Americans to volunteer in developing countries for two years. Traditionally, the majority of Peace Corps volunteers were often newly graduated from colleges, and worked in developing nations with subsistence economies by helping to build ditches, improve agricultural methods, elementary education and community hygiene.

For the new programs in the Baltic and the former Soviet republics, there was less need for such assistance. Instead, these countries requested more sophisticated aid in developing private sector entrepreneurial and small business capabilities. Secretary Chao realized that the new programs in this region needed to focus on different skills to help jump-start the fledging new economies to ensure the continued survival of these new democracies.

So, Peace Corps launched a new campaign to recruit more experienced volunteers with business, marketing, financial, accounting backgrounds who had at least five years of work experience in the private sector. A hotline set up for candidates interested in participating in this exciting new initiative during this historic period in world history, received over 1,000 calls the first day it was in operation. By fall, over 250 Peace Corps Volunteers were on their way to the Republic of Russia. And, other volunteers were soon to follow to Ukraine, Georgia and other newly established nations of the former Soviet Union. 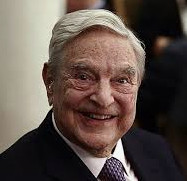 According to Angel Gurria, George Soros is one of their most valuable partners and a trusted friend of Gurria.

Leveraging the SDGs:  Delivering access to justice for all, September 16, 2016

Coffees of the Secretary General with George Soros