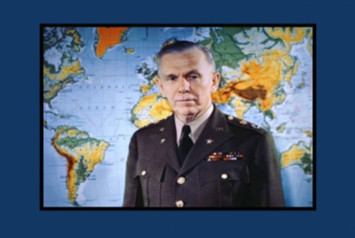 The Bretton Woods Conference established an international system of finance, the Articles of which came into effect in 1945, but the institutions – IMF and World Bank – wouldn’t be functional in time to help rebuild Europe countries.

The Morganthau Plan generally thought to have been produced by Harry Dexter White, called for Germany to pay punitive reparations for the damages to the world by the German Nazi movement included a plan to turn Germany into a “pastoral state” on a permanent diet of potatoes. Obviously, that wasn’t a workable plan (not to mention demonic). A deindustrialized and demilitarized Germany would have been a sitting duck for Stalin and his ambitions. If Germany fell to communism, then the rest of western Europe would fall because the functioning Soviet industries would move to fill the gap of the destroyed industries of the west bringing the communist system with them.

General George C. Marshall, Secretary of State, proposed a solution that came to be known as the Marshall Plan.

The Soviet Union opposed the Marshall Plan because the goals of the plan conflicted with Stalin’s plan for Europe:

“On June 27, 1947, European nations held a conference in Paris to discuss Marshall’s request, it became apparent that the Soviet Union did not intend to participate in or cooperate with the proposal. During the ensuing months of 1947 the Marshall Plan became accepted as the major effort of the United States to save sixteen European nations beyond the orbit of the Soviet Union from economic collapse and communism… The three western nations were blocked by the Soviet Union’s insistence on a Germany economically bound to Russia and a burden to the rest of Europe”.1

“Stalin regarded the plan’s vision of an integrated European market with considerable freedom of movement, goods, services, information, and, inevitably, people, as incompatible with his economic, political, and foreign-policy goals. In June 1947, delegates from France, Great Britain, and the Soviet Union met in Paris to discuss Marshall’s proposal…After several days, Soviet Foreign Minister Vyacheslav M. Molotov walked out, stating that the Soviet government “rejects this plan as totally unsatisfactory.” Viewed by Western leaders as one more refusal to support postwar stabilization efforts, Molotov’s action contributed to the growth of Cold War tensions. In addition to declining to participate in the Marshall Plan itself, the Soviet Union prevented the Eastern European countries under its control from taking part. Subsequent Soviet propaganda portrayed the plan as an American plot to subjugate Western Europe.”2

NOTE:  With the benefit of hindsight, it seems to me that the Morganthau Plan was not a plan for Germany but was the plan for the United States.  In my original research, I noticed the parallels between how policy in the U.S. was implemented following the war and many of the points in the Morganthau Plan.  If that’s correct, then the Marshall Plan for Europe was actually the reparations part of the plan.

On June 5, 1947, speaking to the graduating class at Harvard University, Secretary of State George C. Marshall laid the foundation, in the aftermath of World War II, for a U.S. program of assistance to the countries of Europe. At a time when great cities lay in ruins and national economies were devastated, Marshall called on America to “do whatever it is able to do to assist in the return of normal economic health in the world, without which there can be no political stability and no assured peace.”

The U.S. Congress approved Marshall’s longsighted proposal in 1948, and by 1952 the United States had channeled some $13 billion in economic aid and technical assistance to 16 European countries. During the program’s four years, participating countries saw their aggregate gross national product rise more than 30 percent and industrial production increase by 40 percent over prewar levels.

But the Marshall Plan, as it came to be known, was not just an American program. It was a joint European-American venture, one in which American resources were complemented with local resources, one in which the participants worked cooperatively toward the common goals of freedom and prosperity.

The Marshall Plan at 604
By Erik Reinert and Jomo K.S.

Apart from its historical importance, the Marshall Plan experience offers valuable lessons that have relevance today. It represented a complete reversal of the preceding Morgenthau Plan, named after Treasury Secretary Henry Morgenthau Jr. In his 1945 book, Germany is Our Problem, Morgenthau promoted a de-industrialization plan, “converting Germany into a country principally agricultural and pastoral” to make sure it could never again go to war.

By late 1946, however, economic hardship and unemployment in Germany were worrying the United States, and former President Herbert Hoover was sent there on a fact-finding mission. Hoover’s third report of 18 March 1947 noted: “There is the illusion that the New Germany left after the annexations can be reduced to a ‘pastoral state’. It cannot be done unless we exterminate or move 25,000,000 people out of it.” Hoover well understood that an agricultural economy would be able to sustain a much smaller population than an
industrialized nation.

Hence, the only option was to re-industrialize. Less than three months later, Marshall’s landmark speech reversed policy. Germany and the rest of Europe were to be re-industrialized with policies that included heavy handed economic interventions, such as high duties, quotas and import prohibitions. Free trade would be possible only after reconstruction and international competitiveness had been achieved.

A State Department article was found that has many important details but it has a bit of spin to it. The writer says that the twin objectives were modernization and integration but a more accurate description that gives a clearer definition of the objectives with respect to past and current events is ‘Security and Prosperity’. Prosperity through the breakdown of national barriers for economic integration and collective security for the western European countries. In other words, the goal was to create a United States of Europe. And the U.S. State Department had a major role in the planning and implementation of it.

The Marshall Plan, A Strategy that Worked5

“Kennan and his new State Department Policy Planning Staff produced one of the master documents from which the Marshall Plan eventually flowed…. But there was a specifically European dimension to the Marshall effort. Europe’s evil genie, said people like Kennan, Assistant Secretary of State Dean Acheson, and future ERP Ambassador Averell Harriman, was nationalism. If that root of Nazi-fascism and other 20th-century rivalries could be bottled up in an integrated European economic framework, the resulting prosperity might dampen nationalist competition, prevent future armed conflicts, and obviate U.S. involvement in future European wars.”

…After a long winter of discussion, some stopgap help, and greatly increased tension in East-West relations, the European Recovery Program was born officially with an act of Congress signed by President Truman in April 1948. To administer the project, a new federal agency, the Economic Cooperation Administration (ECA), was established. Truman, a Democrat, signified his intent to secure bipartisan support for the program by appointing a Republican, Studebaker automobile company CEO Paul G. Hoffmann, as ECA head. Expenditures began to flow immediately, under tight congressional supervision.

The program’s official enactment identified the supreme objective as creating in Western Europe “a healthy economy independent of extraordinary outside assistance” by 1952. To this end, comments the economic historian Immanuel Wexler, “the act stipulated a recovery plan based on four specific endeavors: (1) a strong production effort, (2) expansion of foreign trade, (3) the creation and maintenance of internal financial stability, and (4) the development of (European) economic cooperation.”

The Organisation for European Economic Co-operation; (OEEC) came into being on 16 April 1948. It emerged from the Marshall Plan and the Conference of Sixteen (Conference for European Economic Co-operation), which sought to establish a permanent organisation to continue work on a joint recovery programme and in particular to supervise the distribution of aid. The headquarters of the Organisation was in the Chateau de la Muette in Paris, France.

The European organisation adopted was a permanent organisation for economic co-operation, functioning in accordance with the following principles:

• promote co-operation between participating countries and their national production programmes for the reconstruction of Europe,

• develop intra-European trade by reducing tariffs and other barriers to the expansion of trade,

• study the feasibility of creating a customs union or free trade area,

• study multi-lateralisation of payments, and

A crisis hit the Marshall Plan in autumn 1949. The Americans were changing their policy regarding aid, which they considered insufficiently directed towards economic integration. Formerly, Marshall Plan credit had been used mainly to make up the European countries’ dollar balance deficit. The United States was now prepared to provide credits, for the final two years of aid, on the basis of an intra-European action programme. In October-November 1949 the head of the ECA, Paul Hoffman, complained to the OEEC that it was not making enough proposals for freeing trade….

In June 1950 Stikker, Chairman of the OEEC Council, put forward an action plan for the economic integration of Europe through specialisation of activities, division of labour and the creation of a single European market. Countries with heavy state trade were asked to issue long-term purchase contracts at reasonable prices, and a joint list of objects for freeing was proposed. A European fund was to be set up to alleviate the consequences of increased competition for firms. Other proposals were made to accelerate the freeing of trade, and also to give the OEEC power to organise the European economies or rationalise them. Consequently, the French and Italian ministers, Petsche and Pella, amended the Stikker Plan. Central to these projects was a European Investment Bank (EIB), which came into being with the Common Market.

America’s Long Road to the Federal Republic of Germany (West)

1948 Report to the Committee on Foreign Relations, United States Senate, by the Brookings Institute