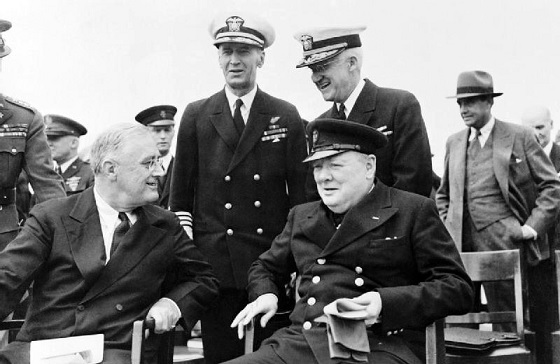 Text of the Atlantic Charter can be viewed at the Avalon Project website, Yale Law School

“The Atlantic Charter served as a foundation stone for the later establishment of the United Nations, setting forth several principles for the nations of the world, including — the renunciation of all aggression, right to self-government, access to raw materials, freedom from want and fear, freedom of the seas, and disarmament of aggressor nations.”2

The Atlantic Charter was incorporated by reference in the Declaration of the United Nations (Jan. 1, 1942).3

Churchill and Roosevelt met on August 9 and 10, 1941 aboard the U.S.S. Augusta in Placentia Bay, Newfoundland

According to a history page on the U.S. State Department website (emphasis added):

“While the Atlantic Charter of August 1941 was not a binding treaty, it was, nonetheless, significant for several reasons. First, it publicly affirmed the sense of solidarity between the U.S. and Great Britain against Axis aggression. Second, it laid out President Roosevelt’s Wilsonian-vision for the postwar world; one that would be characterized by freer exchanges of trade, self-determination, disarmament, and collective security. Finally, the Charter ultimately did serve as an inspiration for colonial subjects throughout the Third World, from Algeria to Vietnam, as they fought for independence.”4