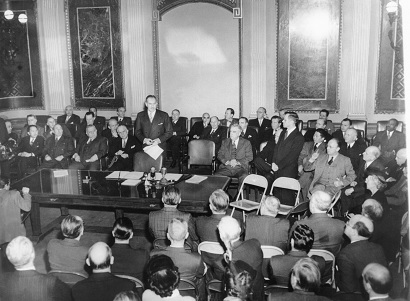 Generalized Agreement on Trade and Tariffs

The triad for global economic regulatory authority under the United Nations system included specialized agencies for labor, finance and trade. The only surviving agency of the League of Nations, the International Labour Office, changed it’s name to the International Labor Organization (ILO) and transferred affiliations to the United Nations in 1946 following a conference in Montreal to revise the Conventions. It was the first agency of the economic triad.

In preparation for the transfer, a conference was held in Philadelphia to revise the ILO Constitution. The revision, known as the Declaration of Philadelphia1 was adopted and annexed on the 10th of May 1944. The Declaration presents the aims and purposes of the ILO. The following is Article I of the Declaration:

The Conference reaffirms the fundamental principles on which the Organization is based and, in particular, that:

(a) labour is not a commodity;

(b) freedom of expression and of association are essential to sustained progress;

(d) the war against want requires to be carried on with unrelenting vigour within each nation, and by continuous and concerted international effort in which the representatives of workers and employers, enjoying equal status with those of governments, join with them in free discussion and democratic decision with a view to the promotion of the common welfare.

On June 24, 1947, President Truman transmitted to the U.S. Senate for ratification, the Final Articles Revision Convention, 1946 (No. 80) agreed to in Montreal. The revision made the International Labor Organization the first specialized UN agency under Article 57 of the UN Charter. The convention was ratified by the Senate and was entered into force as a treaty on June 24, 1948.2

The framework for the international financial system is known by the location where the delegates met to write the conventions. The location was Bretton Woods, New Hampshire. The conference produced language to create the International Bank for Reconstruction and Development (World Bank) coupled with the International Monetary Fund.

“When the Fund and the Bank were conceived, in the course of discussions between officials of the United States and Great Britain during the Second World War, their purposes were clearly delineated: financial stabilization for the one and postwar reconstruction and economic development for the other. Their separate specific functions were less clearly defined, and once they began operations in the late 1940s, they found that they would at least occasionally have to coordinate their efforts to help the same countries cope with different manifestations of the same problems.”3

Administrative/Biographical history: During World War II, some governments were preparing post-war monetary plans — primarily through the efforts of the United Kingdom and the United States. The British Plan made public by Lord Keynes in early 1943, called for an “International Stabilization Fund” to help international economies. Harry Dexter White, deputy secretary of the U.S. Treasury, was called upon to formulate an American response to the British plan.

By March 1943, White was able to report to President Roosevelt on the progress on a “Stabilization Fund for the United and Associated Nations and an International Bank for Reconstruction and Development”, a Treasury joint effort with the Department of State, the Board of Economic Warfare and the Export-Import Bank. By then, a draft had been prepared by representatives of the United States and United Kingdom and shared with technical experts from Russia and China. In June 1943, White hosted a “Technical Experts Meeting” to discuss the Stabilization Plan…

…By the spring of 1944, the “Joint Statement of Experts on the International Monetary Fund” was published simultaneously in eight consulting countries, reporting the views of experts for a more detailed plan.

The United Nations Monetary and Financial Conference opened on July 1, 1944 in Bretton Woods, New Hampshire. Forty-four governments accepted the invitation of President Roosevelt to come together for the purposes of promoting international economic stability. U.S. Secretary of the Treasury Henry Morgenthau was elected president of the Conference. Three commissions were established to conduct the work of the Conference: Commission I was charged with formulating the Articles of Agreement of the International Monetary Fund, Commission II assumed the same responsibility with respect to the International Bank for Reconstruction and Development, and Commission III was to consider other means on international financial cooperation.

The third part of the triad was to have been the International Trade Organization negotiated in Havana, Cuba in 1947 and presented as the Charter of Havana.

On April 28, 1948, President Truman submitted the Charter to Congress under the name, ‘Charter for the International Trade Organization (ITO).5 The Charter was never ratified due to concerns for the sovereignty of our nation. It was withdrawn in 1950.

The Bretton Woods Debates: A Memoir by Raymond F. Mikesell

Articles of Agreement of the International Monetary Fund

IMF and the World Trade Organization