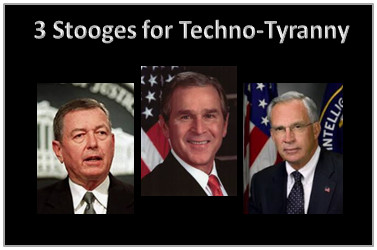 9/11 Pretext for the War of Terror

On September 20, 2001 in an address to Congress, President George W. Bush declared a War on Terror. He described some nebulous bogey men who wanted to hurt the innocent. With the benefit of time and distance from the event of 9/11, listen to Bush’s speech – stripping out the emotional rhetoric.

In the first week in March of 2002, Attorney General John Ashcroft made a series of appearances to talk about the “war time reorganization” of the Department of Justice. The purpose of the reorganization as he characterized it was to change the mission from prosecution to prevention. September 11, 2001 provided the impetus. To prevent terrorism, the department had to shift it’s focus because terrorists plan to kill themselves in the act of their terrorism so prosecution after the fact has no purpose. Logic check that one. Ashcroft changed the operating mission for the entire Department of Justice for the model of the suicide bomber which was a phenomenon of the Middle East and in particular, between the Palestinians and Israelis.

The following is a clip from that meeting. (The full program can be viewed on C-Span.) Ashcroft’s introduction was given by Lt. Governor Frank Brogan. Florida’s domestic security program was already in place and Brogan said it was a model for the entire nation. There is no doubt in this writer’s mind that what he said was true. Why? IBM was in Boca Raton and the domestic security program was all about information sharing. IBM was the leading corporation in the Alliance for Redesigning Government that was organized in 1992. Plus, the military – Southern Command was located in Florida – Dade County.

The next two speakers of interest were Rep. Porter Goss (FL), Chairman of the House Permanent Committee on Intelligence and Ronald Noble, General Secretary of Interpol. Note: Goss said that Alcee Hastings was at the event.   In Goss’ introduction of Noble, he said there was terrorism everywhere – all over the world. In fact, he tracked down Ron Noble to invite him to this event to talk about it.

Ron Noble’s remarks concerning the alleged terrorist planning documents found in Singapore combined with the idea of a global security system using shared information systems laterally (government-to-government) and vertically – national to local are key to understanding the coup d’etat and the deformation of the American government to serve global technocratic communism.

How do you define terrorism? How do you define freedom? If you think that the answers to those questions are easy or obvious then you haven’t given serious thought to them. The search for answers begins with: What is the context within which the questions are being asked? That is the problem with John Ashcroft’s plan to upend the Department of Justice to focus on prevention of terrorism rather than prosecution of crime. There is a continuity of program planning and project progress for a domestic surveillance program beginning with the paradigm shift in the U.S. Transportation system that was initiated by the George H.W. Bush administration in 1990. With the benefit of understanding that history, it makes John Ashcroft’s reorganization of the Justice Department an obvious next phase in the globalization of government and the global police state surveillance system. That view is fortified by the fact that there were three commissions on the prevention of terrorism completed just before Bush took office – before September 11, 2001.

+Three Commissions on Terrorism Prior to 9/11

The Commission was chartered in 1998 by Secretary of Defense William Cohen.  The purpose was to do a full review of the U.S. national security organization and structure.

Congress directed the establishment of the panel in October 1998. The Department of Defense, in consultation with the Attorney General, the secretary of Energy, the secretary of Health and Human Services, and the director of the Federal Emergency Management Agency, contracted the RAND Corp. to support the group with a federally funded research and development center.

Commission Report 2, Toward a National Strategy for Combating Terrorism, December 15, 2000

“Six months ago, the National Commission on Terrorism began its Congressionally mandated evaluation of America’s laws, policies, and practices for preventing and punishing terrorism directed at American citizens.”

On February 14, 2003, President George W. Bush attended an event at which he stated explicitly that the reorientation of the Department of Justice was a phase of reinvention of government. Take note of the fact that Ashcroft said that George W. Bush put together a coalition of 90 countries for this so-called war on terror – implementation of the police state.

On October 20, 2001 at the APEC meeting in Shanghai, President George W. Bush gave a speech that to this writer reveals the context in which George W. Bush declared the War On Terror. The context in turn defines the characteristics of the “terrorists” outside of the religious context of Afghanistan. C-Span has a video of Bush’s remarks at that meeting and the transcript of the remarks are posted on the American Presidency website. 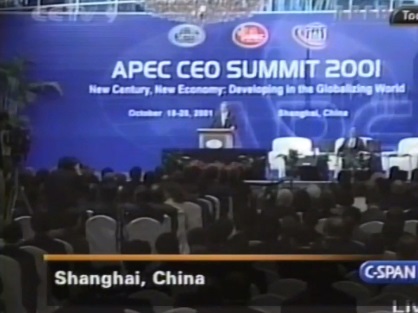 The following are the specific things that George W. Bush said that reveal the context of 9/11 and they all have to do with trade facilitation which means transportation and integrated IT systems across borders.  Notice that he said each country would have to make contributions to participate:

The most visible part of our response is taking place in Afghanistan…My Government supports international efforts to bring help and stability and peace to that unfortunate nation.

There’s frustration about the delivery of food and medicine and help in Afghanistan.

Our war on terror has many fronts, and military action is only part of our plan. This campaign will take strong diplomacy and intelligence, diligent law enforcement and financial cooperation. It will span every continent and require varied contributions from many nations.

By attacking two great economic symbols, the terrorists tried to shatter confidence in the world economic system, but they failed. The terrorists hoped world markets would collapse, but markets have proven their resiliency and fundamental strength.

And this week in these halls, we return to the steady work of building the market-based economic system.

Together, we must meet the Bogor Goals, including free trade for every nation in this region by 2020. The Shanghai Accord we’ll sign tomorrow gives us new and useful tools to enhance trade and investment.

Even before September 11th, this region faced economic uncertainty. The answer is more trade and openness, not less. This region needs regulatory systems that attract investors. Banking systems must be more transparent. Corporations must be more open and accountable. And as called for in the Shanghai Accord, we must dramatically reduce the cost of doing business across borders by streamlining customs procedures, by harmonizing technology standards, and by cutting redtape.

Our second broad challenge is to fight terrorism within our countries without undermining the ties of commerce and friendship between our countries. Terrorists want to turn the openness of the global economy against itself. We must not let them. We need customs, financial, immigration, and transportation systems that make it easier for us to do our business and much harder for terrorists to do theirs. Pursuing both openness and security is difficult. But it is necessary, and it is the aim of the counterterror measures the APEC leaders will commit themselves to tomorrow.

The Baltics – Members of the Club of Techno-Tyranny

On April 3, 2018, the three presidents of the Baltic States were in the United States to meet with President Trump.  C-Span had the original video from which I took the following clip that I named “The Look”.  As I was building this post from a prior post, I went to get the original link on C-Span but it’s gone.  They took it down.  The State Department has a video of the event, but “the look” isn’t in that video.   The following is the video clip I took of the event as it was posted on C-Span.

The conclusion of this writer is that the whole “war on terror” is a farce to justify the installation of the global technocratic tyranny for the benefit of multinational corporations and international commerce.

The above post is an extract of another post that was written about APEC and communist global economic planning.