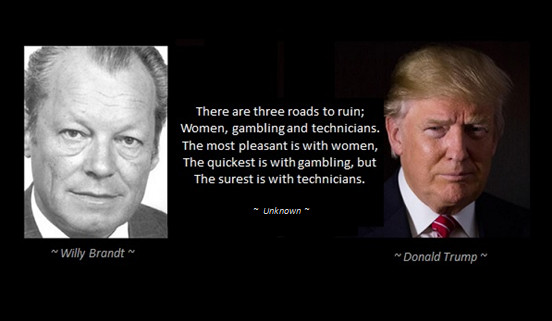 As I was listening to the re-run of Infowars this evening when they were discussing the circumstances of the resignation of Michael Flynn, I kept having a nagging feeling that I couldn’t define.  Then it came to me… I’ve heard this story before.  Russian spy in the administration… government infiltrated, moles, the whole spiel.

Where I heard it before was when I was reading about Willy Brandt, the Mayor of Berlin who was brought down when he was accused of having a Russian spy in his administration.

One thing that we absolutely know about the left is that they follow scripts.  They don’t deviate – they are not allowed to ad lib.  That’s why their shills on the internet only ever have one thing to say… racist!  That’s their script and they follow it religiously.

The other thing we know is that the Intelligence agencies have shifted their loyalty to their counterparts globally in a horizontal organization across national borders.  In fact, they are the driving force to eliminate borders.  The CIA funded In-Q-Tel to invest in the technology sector.