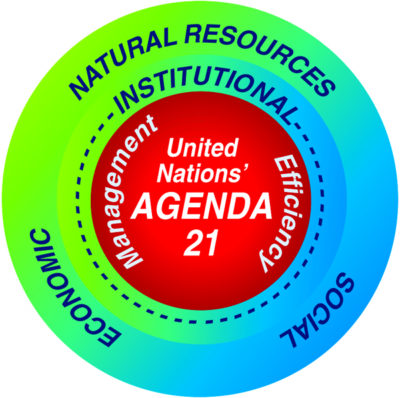 This morning Politico’s Energy and Environment Reporter, Zack Colman was on C-Span Washington Journal to talk about A. O’Crazio Cortez’s New Green Deal.  The so-called New Green Deal is Agenda 21 for Dummies.  It’s just the bullet points for a few of the major themes of the Agenda.  Of course he doesn’t mention Agenda 21 or the United Nations.

A few years ago, a friend of mine put together a report about “Sustainable Development” which is a synonym for Agenda 21/Agenda 2030 (just an updated version of Agenda 21).  It’s funny that Nancy Pelosi is trying to distance herself from the plan because she’s been a tool for the Agenda since the 1992 Earth Summit.  In fact, she facilitated the Army’s transfer of the Presidio to a private trust.  Mikhail Gorbachev was one of the first tenants at the Presidio.  The purpose of the Gorbachev Foundation in the U.S. was environmental – spreading the gospel of protection of Mother Gaia.

Report of Sustainable Development – Agenda 21 legislation introduced in Congress from the 100th to the 112th session.