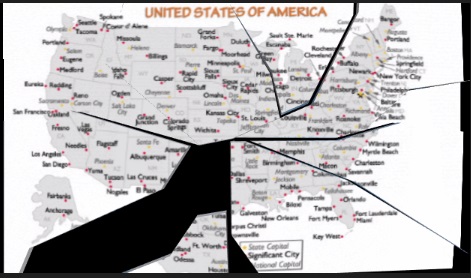 The United States began with a written compact between the states called the Articles of Confederation.  The Articles became effective on March 1, 1781 after being ratified by all 13 states.  Within a few years, they realized that the Articles were too weak to allow the establishment of a functional government to serve the states.  The Founders met in Philadelphia and after discussion realized that the Articles couldn’t be amended to fix the weaknesses so they produced a new document – the Constitution which was then ratified by the states.   The Constitution provided definition of the organizational structure of the U.S., the balance of power between the branches of government and between the government and the states.   Constitutions of the states did the same for their territory.  They defined the organizational structure, the balance of power and the jurisdictions within the states.

Nobody would argue there aren’t flaws in the Constitution but that is not the focus of this article.  The Constitution served very well for a couple of hundred years until socialists took the reins of power (Lyndon Johnson – the Great Society) followed by anarchists (Ronald Reagan) who sought to break the organizational structure incrementally through privatization and free trade (free traitors).   By the time Reagan came along, an international governing structure (Socialist)  had taken root (United Nations) and they had a different organizational structure in mind for the world (regions to replace nations).  To be succinct, the Libertarian/Socialists who came to power under the Reagan Administration began the process of dismantling the organizational structure of the U.S. through privatization of governing power (with funding) making way for an international system of government under a global socialist regime.

The externalization of governing power through privatization along with funding and mandates provided to jurisdictions below the level of the states weakened the fabric of the nation while it empowered lower level jurisdictions and off-books jurisdictions (Port Districts).

The above is a high-level summary of the steps taken to fracture the nation.  In general, what happened is a weakened national organizational structure and a shift in the balance of power through funding programs.  If it wasn’t clear before the year 2000, it should be clear by this time that the objective was to break up the United States and to replace it with regional governance under international treaty.  The cities become the centers of power under the international system as the federal and state governments are incrementally dis-empowered.

Anarchy From Above and Mutiny From Below

In the year 2000, the U.S. Conference of Mayors held their first Transatlantic Mayors Summit in Lyon France.  The Conference was initiated Felix G. Rohatyn, United States Ambassador to France, and John Kornblum, U.S. Ambassador to Germany, the meeting was conceived by The United States Conference of Mayors in coordination with the Aspen Institutes in Germany and France. The Lyon meeting was hosted by Raymond Barre, former Prime Minister of France and Mayor of Lyon, France, and was attended by Mayors of 30 cities in Germany, France and the U.S.

An article posted on the U.S. Conference of Mayors website (now archived) described the event.  The following are excerpts:

“The Twenty-First Century will be the Century of Cities,”

“If the nineteenth century was the century of empires and the twentieth century the century of nation states, then the twenty-first century will be the century of cities,”  ~ Conference President and Denver Mayor Wellington E. Webb. “Our cities will be both the heart and soul of this historic and global transformation.” And “globalization gives us new opportunities for partnership,” ~  Wellington E. Webb The genesis of the first Transatlantic Summit of Mayors lay in a series of discussions between Ambassador Felix G. Rohatyn, U. S. Ambassador to France, and Conference of Mayors Executive Director J. Thomas Cochran, beginning in January 1999.

The Role of Mayors and Cities in Globalization

Boise Mayor Coles emphasized how trade, education, and culture converge in cities, providing a “tipping point” to create ripples, waves, and finally tidal waves of profound changes on the globe.

Strasbourg Mayor Roland Ries agreed, noting that the world is experiencing a “global speeding up of history.”

Mayor Coles urged mayors to understand our own strengths, regionally, nationally and internationally. “We must be engaged in regional strategies of smart growth and sustainability,” he said. Globalization means that, “Mayors and cities may be more relevant than ever before. Let me recommend that in our next meetings that we share best practices regionally, nationally, and internationally.”

New Orleans Mayor Marc Morial observed, “You can’t be a mayor today without having your own foreign policy. Mayors have to be more in tune with international political events than ever before.”

St. Louis Mayor Clarence Harmon pointed out that he is “personally involved in the conduct of business in foreign markets” by his city…. He described a trade entity in St. Louis – the “St. Louis Development Corporation,” which promotes small and medium businesses. Mayor Harmon noted his trade missions to Japan, China, and Mexico, for example, on behalf of his city.

Of special interest was this quote from the Mayor of Minneapolis.  This paragraph plus the quote from the New Traditions article shows that there was a strategy of destabilization of our states through intentional demographic shifts through migration – both illegal and through the international refugee resettlement system (ground war on native populations through the introduction of foreign inhabitants with foreign and incompatible cultures).

Minneapolis Mayor Sayles Belton described the changes in her own city over the past several decades, as the percentage of people of color has increased from five percent to about 25 percent. “Over the past eight years,” the new demographic pattern in Minnesota is an influx of migrant workers – illegal and undocumented. In addition, the national government recently made a decision to resettle 25,000 Somali and Ethiopian refugees in Minneapolis. These changes in immigration patterns have brought major pressures on city government. “In our city at this time, forty-seven different languages are spoken by children in our public schools,” Mayor Sayles Belton said.

On a German website called New Traditions, there is an article about the Transatlantic Conference that included the following gems.   Note: The link to the Home Page is at the bottom of the article.

The mayors agreed that their own role is changing as a result of globalization. They are no longer the traditional city planners of the past 100 years, but rather ombudsmen and innovative leaders of important communities and regions. Mayors can no longer afford to deal only with local stakeholders. They conduct their own foreign policy in an environment that sets local issues on the agenda of local politics. Ambassador John Kornblum strongly encouraged mayors to ignore the admonishments of foreign ministries not to engage in foreign affairs. For the good of their citizens, mayors will increasingly enter the international arena and become global players. The network resulting from the Aspen Transatlantic Summit series provides a forum for a sustainable international dialogue among mayors to discuss common challenges, exchange best practices, and promote international understanding.

The issue which generated the most intense discussion was the question of how to successfully assimilate immigrants and minorities into existing communities. What is the recipe for a multicultural society?

An article titled, The Fate of National Sovereignty posted on the Aspen Institute website that has been archived, had the following paragraphs which were excerpted:

As networking technologies fuel the globalization of national economies, a renegotiation of authority is occurring between multinational corporations and nation-states. The result: the very “architecture of national sovereignty” is being remade in new and confusing ways. Nation-states are losing control of some of their traditional powers over many economic and financial matters to entirely new sorts of international bodies and new legal regimes, while retaining most of their other powers.

The de-nationalizing of territory. This trend is exemplified by a number of “global cities” around the world, where the highly specialized functions of corporate headquarters (finance, accounting, law, strategic planning, etc.) are concentrated. Cities like New York are now “the equivalent of a free trade zone when it comes to finance,” writes Sassen.

This development has been propelled by a basic tension between globally minded corporations and territorially based nation-states, writes Sassen: “Firms operating transnationally need to ensure the functions traditionally exercised by the state in the national realm of the economy, such as guaranteeing property rights and contracts.

The virtualization of economic activity. The globalization of electronic commerce is bringing with it some very difficult challenges to national sovereignty, Sassen warns: ” The growing virtualization of economic activity, particularly in the leading information industries such as finance and specialized corporate services, may be contributing to a crisis in control that transcends the capacities of both the state and the institutional apparatus of the economy.