Green is the New Red

The Organization for Security and Cooperation in Europe (OSCE) has its origins in the early 1950s, when the Soviet Union first proposed the creation of an all-European security conference. In the mid-1960s the Warsaw Pact renewed calls for such a conference. In May 1969, the Government of Finland sent a memorandum to all European countries, the United States and Canada, offering Helsinki as a conference venue. Beginning in November 1972, representatives from the original 35 nations met for nearly three years to work out the arrangements and the framework for the conference, concluding their work in July 1975.

The establishment of the Council on Environmental Quality followed by the creation of the Environmental Protection Agency changed the mission of the U.S. Government from a government for the people to be the protector of

The Green Theme
Saving the planet from the ravages of humanity

Henry ‘Scoop’ Jackson pushed the National Environmental Policy Act (NEPA) through Congress in 1969.  President Richard Nixon signed it in 1970.  The legislation established the Council on Environmental Quality (CEQ) as an executive branch advisory council.  The Environmental Protection Agency was created by Nixon’s government Re-organization plan No. 3.

Under Secretary of the Interior, Russell Train became the first Chairman of the Council on Environmental Quality.  William Ruckelshaus was appointed to be the first EPA Administrator.

Richard Nixon signed the U.S.-USSR Environmental Cooperation Treaty on May 23, 1972. Russell Train, Chairman of the CEQ was designated as the principal coordinator working directly with the Soviets in cooperation on environmental issues.

Burglary (Hack) of DNC Headquarters at the Watergate Complex – June 17, 1972 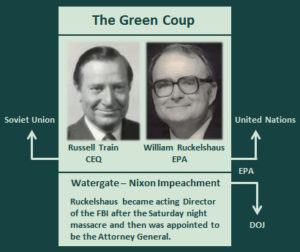 On August 9, 1974, Richard Nixon resigned from office to avoid impeachment.  Gerald Ford who was appointed to the Vice Presidency when Spiro Agnew resigned, became the President.  According to Wiki, he’s the only man to have served as Vice President and President that was never elected to either office.  On August 1, 1975, Gerald Ford signed the Helsinki Accords (Helsinki Final Act) agreeing to cooperation with the communists in three areas:

1. Cooperation in questions related to Security in Europe

2. Co-operation in the fields of economics, science and technology, and the environment

3. Co-operation in humanitarian and other fields (also called The Human Dimension)