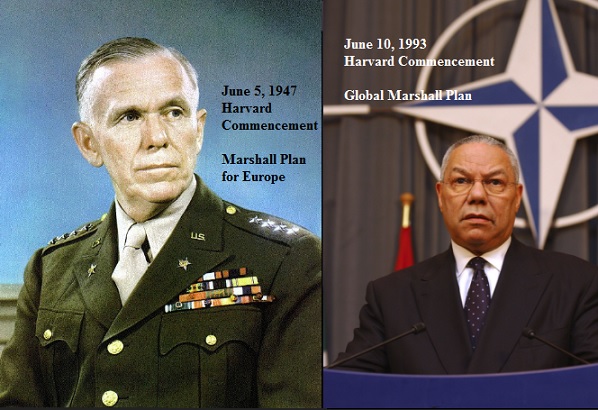 The New World Order of Lies

The one iron rule of super states: “logic is an enemy, and truth is a menace”  Rod Serling

If it were possible to live within a metaphor, we would be living in it in the United States.  The metaphor is global warming as a substitute term for geopolitical restructuring due to the ending of the Cold War.  As the cold war ends, the globe warms.

If you tell the truth, life is easy.  You don’t have to remember anything because the story is the same every time.  When you lie, you have to remember the lie and you have to invent details – sometimes on the fly.   In the United States, we are adrift in a universe of lies because of terms like global warming.

General Powell was walking in General Marshall’s footsteps.  Both Generals – Marshall and Powell spoke there to elicit the support of Harvard faculty and graduates in a rebuilding effort.

On October 19, 1993 one day after the first public meeting of the President’s Council on Sustainable Development (PCSD) Al Gore and Bill Clinton held an event at the White House.  The event was to announce the Clinton Administration’s Climate Change Action Plan as the strategy to “fight global warming”.

With the new information above – that the Colin Powell as National Security Advisor to President George H.W. Bush had been thinking about the end of the Cold War since 1987 and when I add to that, what I see in the Energy Policy Act of 1992 it makes a mockery climate change having anything to do with the environment.

The Energy Policy Act of 1992 defined a government corporation, United States Enrichment Corporation to buy enriched uranium from the Soviets.  It included a provision that this corporation would be privatized in two years.   See TITLE IX, Sec. 1406-1407 and Chapter 25 Sec. 1501.

So who was able to buy this privatized corporation that has exclusive control over enriched uranium?     Al Qaeda maybe?    Or this group – which included Ted Turner in the beginning  NTI?

It seems to me that what the Congress did was to literally create a gun to put to our heads by creating a private, for-profit corporation to buy and sell enriched uranium.    Is that why our public officials have become so stupid and/or corrupt that they are letting our country be destroyed?   Is this why they pretend that it’s perfectly normal to import Muslim jihadis as refugees and then setting them up in business?

Anyway, where I was going with this was that the Defense Department under the direction the Chairman of the Joint Chiefs of Staff, Colin Powell but through the Office of Environmental Policy supposedly under the direction of that twit Katie McGinty but more likely, Sherri Goodman, Undersecretary of Defense was the one who led the effort to write the Climate Change Action Plan.  I know that because of the Joint Implementation provision for “developing countries”.  The Energy Policy Act of 1992 defines countries in Central and Eastern Europe (independent states of the former Soviet Union) as developing countries.  So what the Energy Policy Act of 1992 really was – was the “Marshall Plan” for the Soviet Union and the strategic plan for war on the people and economy of the United States.

It seems to this writer that what they did when they ended the Cold War was to establish a permanent threat of hot war – nuclear destruction.  We knew they were attempting to convert the basis for the world’s economy away from production and use of natural resources going instead to a reverse system of punishing production and the use of natural resources and rewarding zero energy usage.  Of course zero energy is death.

“I am become death, the destroyer of worlds”.  J. Robert Oppenheimer

The following are the links to the full videos on C-Span: