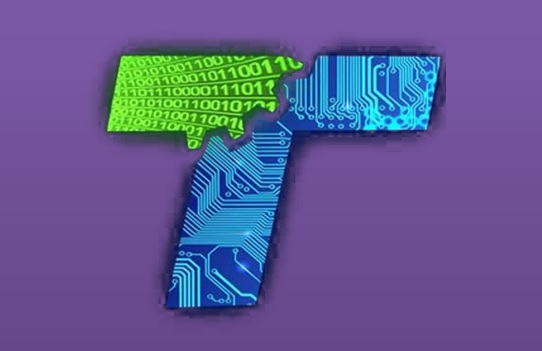 Saturday last, Darren Weeks, the host of Govern America radio program had a clip of Hillary Clinton speaking at the 2017 Women in the World Summit.  Just prior to playing the clip of Hillary, he played a montage of clips of U.S. leaders across administrations saying exactly the same thing that Donald Trump did as he announced that he was going to bomb Syria.

The Women in the World Conference has the video of it on youtube.   The following is the full clip of Hillary talking about Syria.

The only purpose for installing a technocratic regime is if you intend to implement technocratic systems like they did in Iraq.  An article in The Atlantic titled The Failed Reconstruction of Iraq listed how much money American taxpayers have paid for the rebuilding – and equally important a hint of the technocratic future for Americans because the technological control systems are being implemented here.  Iraq must have been the pilot project:

The bill for Iraq is hard to divide into neat categories, but in rough terms: Washington spent more than $15 billion to try and improve Iraq’s power and water supply, revive its schools, and repair its roads and housing; it spent another $9 billion on health care, law enforcement, and humanitarian assistance; it spent $20 billion training and re-equipping Iraqi security forces; it spent roughly $8 billion to enhance the rule of law and battle narcotics; and it spent $5 billion helping to prop up the economy.

Bowen’s interviews with influential Iraqis reveal, however, that they don’t seem to have noticed all this investment or don’t seem grateful. One reason might be that households — as recently as 2011 — still got an average of only 7.6 hours of electricity a day, and a sixth of Iraq’s citizens lacked access to potable drinking water for more than two hours a day.

When there is that kind of money involved for corporations and non-profits, it’s not difficult to figure out who might be paying for the insurgents.  Whatever they are paying for private military contractors is pocket change compared to what the Dons of Davos stand to make.  And this is a good time to mention that the money that Bill and Hillary are making on consulting fees by facilitating deals for corporations are also pocket change compared to the money that is going to be made in the rebuilding – not to mention the long term goals of the prison planet controlled by technology.

The restrictions on water and electricity are demonstrations of the capabilities of the technocratic control systems (Smart Grid) designed to restrict the ordinary man’s use of natural resources in keeping with the goals of the sustainable development programs.  It doesn’t matter whether the restrictions are a requirement of natural resources or not.  The goal is control and the ability to demonstrate the power of the police state to control the lives of the ordinary man.  (How do I know it’s the Smart Grid?  Because you could only shut off and restore water and electricity at the household level for brief periods of time with computerized control systems).

Since 1990 when the Cold War ended and the reunification of Germany occurred, there has been a race to implement global fascism through a covert war on the people using a cover story of environmentalism and terrorism as justification for implementing technological control systems – technology for the police state.  This covert war has been dubbed a “war in the context of everything else”  because it is a war by stealth and it is a war against civil society by his own government.  This is the global agenda – technological control over civil society.  The Technocrats who are waging this war are corporate globalists who have bought our governments.

George H.W. Bush kicked off the war on civil society but he did not have time enough to do much in terms of this global war on the ordinary man.  He did however negotiate the NAFTA agreement and he did agree to the “sustainable development” agenda as defined at the Rio Earth Summit in 1992.   The Clinton Administration picked up the agenda without missing a beat.  The following two videos were made at the beginning of the Clinton Administration.  Both videos define the “new mission” of the United States to replace the Cold War politics and institutions.

In December of 2015, PBS broadcast a segment of Washington Week in which the participants were talking about ISIS in Iraq – but they also mentioned that U.S. Special Forces were already in Northern Syria.  As one of the journalists said, Assad is a friend for now but will be an enemy later.  He said that because Assad is on the list to be taken out.

It was actually in 2003 when George W. Bush expanded his so-called War on Terrorism.    The following is an excerpt from a BBC article in 2003: 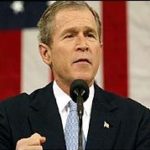 The United States has added Cuba, Libya and Syria to the nations it claims are deliberately seeking to obtain chemical or biological weapons.

In a speech entitled “Beyond the Axis of Evil”, US Under Secretary of State, John Bolton said that the three nations could be grouped with other so-called “rogue states” – Iraq, Iran and North Korea – in actively attempting to develop weapons of mass destruction.

“America is determined to prevent the next wave of terror,” he said, referring to the 11 September attacks in Washington and New York that killed up to 3,000 people.

Going back a little bit farther, in 1985 scientists proposed using international terrorism as a replacement doctrine for the U.S. and Soviet Union to replace each other as the “common enemy“.    In 1989, Rand Analyst Brian Michael Jenkins wrote a paper titled, The Possibility of Soviet-American Cooperation Against Terrorism.

There can be no doubt given the current status of the world and the motivating factors driving it, that terrorism is a government sponsored “common enemy” to use terrorism against the ordinary man to implement global fascism using technology as weapons of control.   What that means is that the real “common enemy” of world leaders is you, the ordinary man.

The evolution of thinking of the Democratic Leadership Council (DLC) – Technocrats that took over the Democratic Party as promoted by the Progressive Policy Institute (PPI) was Third Way socialism for the information age.  The following graphic was captured from their website after it was archived: 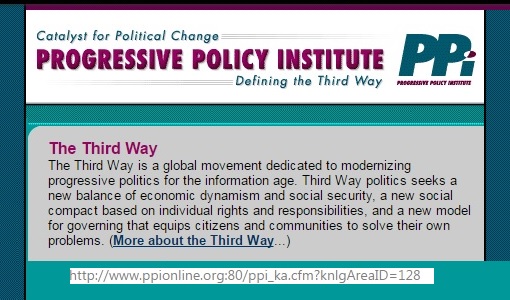 On April 25, 1999, the DLC sponsored an event at the National Press Club.  It was revealed at that press conference that the Third Way was the agenda of the Socialist International – and Bill Clinton was a member.

When you understand all the above, the fog of war lifts and you can see that the wars in the Middle East are about installing technocrat managers for socialist global police state systems that will enslave the ordinary man – and his family.

I’ll leave you with this message from the World Economic Forum at Davos.   You can watch the entire video HERE.   But here is a clip from it: