The triad for global economic regulatory authority under the United Nations system included
specialized agencies for labor, finance and trade.

The first agency of the economic triad was for labor.  The only surviving agency of the League of Nations, the International Labour Office, changed it’s name to the International Labor Organization (ILO) and transferred affiliations to the United Nations.   In preparation for the transfer, a conference was held in Philadelphia to revise the ILO Constitution. The revision, known as the Declaration of Philadelphia1 was adopted and annexed on the 10th of May 1944. The Declaration presents the aims and purposes of the ILO.

In 1946, after the United Nations Association was established, a conference was held in Montreal to formalize the revisions to the ILO Conventions.   On June 24, 1947, President Truman transmitted to the U.S. Senate for ratification, the Final Articles Revision Convention, 1946 (No. 80) agreed to in Montreal.2 The revision made the International Labor Organization the first specialized UN agency under Article 57 of the UN Charter. The convention was ratified by the Senate and was entered into force as a treaty on June 24, 1948. This action created the first agency of the economic triad.  The Constitution of the ILO3 is posted on their website and may be viewed HERE.

The framework for the international financial system is known by the location where the delegates met to write the conventions, Bretton Woods, New Hampshire. The conference produced language to create the International Bank for Reconstruction and Development (World Bank) coupled with the International Monetary Fund.

“When the Fund and the Bank were conceived, in the course of discussions between officials of the United States and Great Britain during the Second World War, their purposes were clearly delineated: financial stabilization for the one and postwar reconstruction and economic development for the other. Their separate specific functions were less clearly defined, and once they began operations in the late 1940s, they found that they would at least occasionally have to coordinate their efforts to help the same countries cope with different manifestations of the same problems.”4

Administrative/Biographical history: During World War II, some governments were preparing post-war monetary plans — primarily through the efforts of the United Kingdom and the United States. The British Plan made public by Lord Keynes in early 1943, called for an “International Stabilization Fund” to help international economies. Harry Dexter White, deputy secretary of the U.S. Treasury, was called upon to formulate an American response to the British plan.

By March 1943, White was able to report to President Roosevelt on the progress on a “Stabilization Fund for the United and Associated Nations and an International Bank for Reconstruction and Development”, a Treasury joint effort with the Department of State, the Board of Economic Warfare and the Export-Import Bank. By then, a draft had been prepared by representatives of the United States and United Kingdom and shared with technical experts from Russia and China. In June 1943, White hosted a “Technical Experts Meeting” to discuss the Stabilization Plan…

…By the spring of 1944, the “Joint Statement of Experts on the International Monetary Fund” was published simultaneously in eight consulting countries, reporting the views of experts for a more detailed plan.

The United Nations Monetary and Financial Conference opened on July 1, 1944 in Bretton Woods, New Hampshire. Forty-four governments accepted the invitation of President Roosevelt to come together for the purposes of promoting international economic stability. U.S. Secretary of the Treasury Henry Morgenthau was elected president of the Conference. Three commissions were established to conduct the work of the Conference: Commission I was charged with formulating the Articles of Agreement of the International Monetary Fund, Commission II assumed the same responsibility with respect to the International Bank for Reconstruction and Development, and Commission III was to consider other means on international financial cooperation.

We can hardly expect the nation-state to make itself superfluous, at least not overnight. Rather what we must aim for is really nothing more than caretakers of a bankrupt international machine which will have to be transformed slowly into a new one. The transition will not be dramatic, but a gradual one. People will still cling to national symbols.”

— Henry Morgenthau, CFR, Secretary of the Treasury under FDR, 1945

The third part of the triad was to have been the International Trade Organization.  Negotiations for that were held in Havana, Cuba in 1947 and were presented as the Charter of Havana6.

On April 28, 1948, President Truman submitted the Charter to Congress under the name, ‘Charter for the International Trade Organization (ITO).7 The Charter was never ratified due to concerns for the sovereignty of our nation. It was withdrawn in 1950.

The negotiating framework became known as the General Agreement on Trade and Tariffs.7  Even though it was provisional – NEVER RATIFIED BY THE SENATE, GATT was used over the next 44 years as the framework for trade rounds that led to the final agreement signed in Marrakesh in 1994 that established the World Trade Organization. 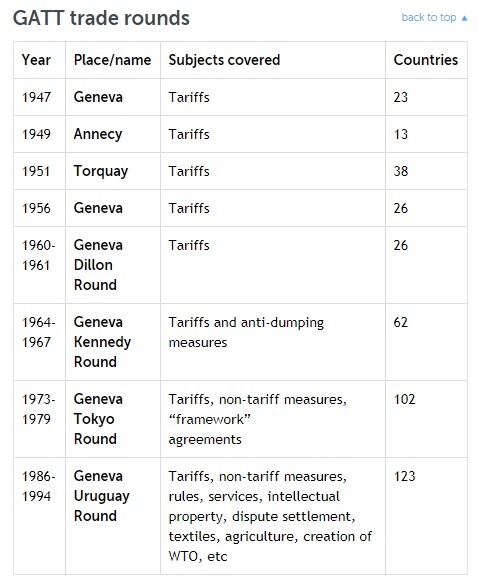 Until the early 1960s, the Department of State was responsible for conducting U.S. trade and investment diplomacy and administering the President’s trade agreement program. In the Trade Expansion Act of 1962, Congress called for the President to appoint a Special Representative for Trade Negotiations to conduct U.S. trade negotiations. The Act provided for the Special Trade Representative to serve as chair of a new interagency trade organization established to make recommendations to the President on his trade agreement program. The legislation reflected Congressional interest in achieving a better balance between competing domestic and international interests in formulating and implementing U.S. trade policy.

In 1963, President Kennedy created a new Office of the Special Trade Representative (STR) in the Executive Office of the President and designated two new Deputies – one in Washington, D.C., and the other in Geneva, Switzerland. Through the mid-1960’s, STR had the chief responsibility for U.S. participation in the Kennedy Round of multilateral trade negotiations held under the auspices of the General Agreement on Tariffs and Trade (GATT).

In the 1970s, the Congress substantially expanded STR’s responsibilities. Section 141 of the Trade Act of 1974 provided a legislative charter for STR as part of the Executive Office of the President, making it responsible for the trade agreements programs under the Tariff Act of 1930, the Trade Expansion Act of 1962, and the 1974 act. The act also made STR directly accountable to both the President and the Congress for these and other trade responsibilities and elevated the Special Trade Representative to cabinet level…. MORE

It was after 1973 when the negotiations included non-tariff issues that they – the U.S. State Department and the Congress began selling out the people of this nation by including items that drove changes in domestic law, our economy and our way of life.   TREASON by any other name…

Backing up a bit, the movement of towards a world governing system for business began in 1919 with an International Trade Conference of the Industrialists (Merchants of Peace) held in Atlantic City, NJ presumably to organize as an international agency under the League of Nations. 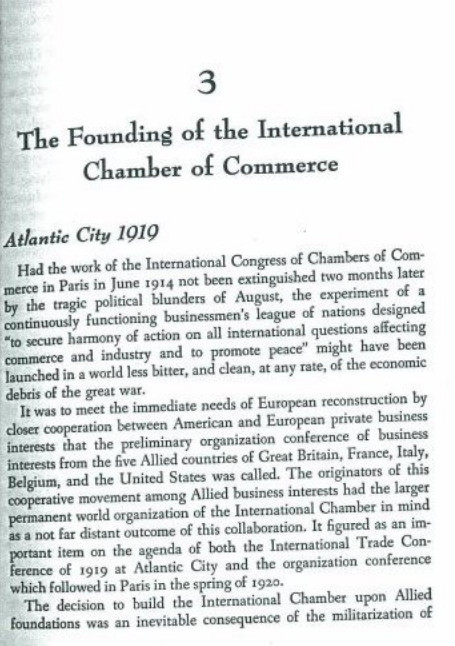 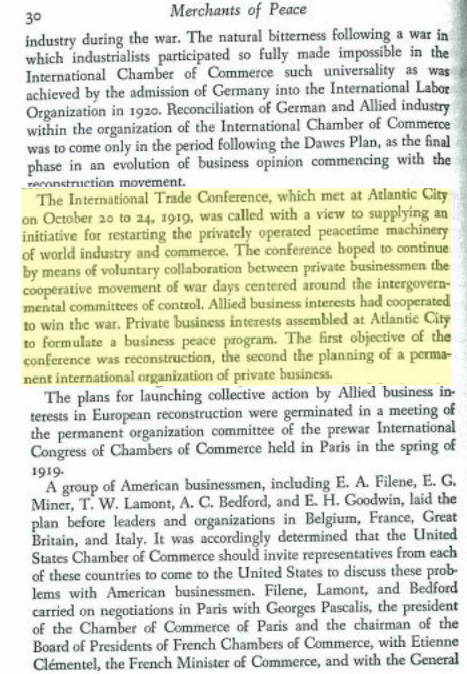 The international system was built for corporations to facilitate their business interests.  The interests of regular people – the citizens of nations were not a consideration except for how to control them as factors of production despite the high sounding rhetoric that spews forth from the mouths of traitors.  The system was designed to bleed our nation of its wealth and to transfer that wealth into the pockets of the international financial mafia that was behind the GATT agreement and the creation of the WTO.

Britain has always used their colonies to extract the resources from those countries to enrich the people of the City of London.  The Atlantic Charter and all subsequent international agreements were designed to turn the U.S. into a colony for resource and wealth extraction.