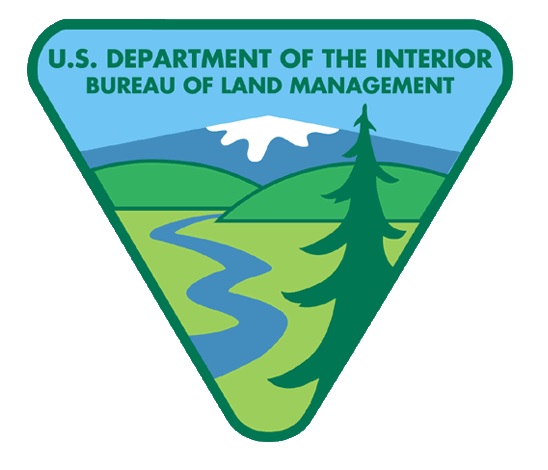 In 2014 federal government agents attempted to steal Cliven Bundy’s cattle from land for which Bundy had grazing rights.  Bundy realized in the 1990’s that the Bureau of Land Management (BLM) was trying to take his life by taking the means by which he lived.   Rather than paying the federal racketeers ransom money, Bundy decided that he would pay the grazing fees to the county where his ranch is located.

The code of the west has always been that cattle rustlers should be hanged – even if they are wearing a badge or perhaps especially if they are wearing a badge because they are abusing the authority of the badge.   Western patriots came to Bundy’s aid to prevent the theft of his cattle.  The federal cattle rustlers backed off then but seem to be taking their revenge on the Bundys’ and their supporters now.

If one limits their perspective to just Cliven Bundy’s travails with the BLM, it would seem over the top to call federal employees’ racketeers and cattle rustlers but if one takes the wide-angle view of the system that passes for an American government, it’s not at all over the top.  As an accidental student of public administration, it’s not even clear to me that we have an American federal government.  The federal government seems to have been replaced by an international crime syndicate that is taking our lives by taking the means by which we live.   And that applies for all sectors of the economy even to the point of replacing American workers with foreign imported workers in our own labor market.   “You take my life when you take the means by which I live”.

Cutting to the chase, there has been an on-going conspiracy that began with the Carnegie Foundations to topple the American government – replacing it with a system of “governance” run by proxies of Merchants (See here and here).   The vehicle through which the Carnegie Foundations have operated is the State Department.  They basically took it over at the turn of the 20th century.   Like termites eat the wood from the inside out, the Carnegie Foundations have been working to subvert and ultimately to extinguish the American government for the American people.   The race to finish off their dirty work came during the Clinton Administration with the North American Free Trade Agreement (NAFTA) and the Marrakesh Agreement that created the World Trade Organization (WTO).   Following Senate ratification of those agreements, there has been a mass exodus of production from this country draining the wealth of the country – followed by the policies of allowing corporations to import foreign labor to replace American labor on our own shores.    All of this was done with the support of the mainstream media whose message was that – this is all perfectly normal.  What it actually was is Democide – taking our lives by taking the means by which we live.

“When in the Course of human events, it becomes necessary for one people to dissolve the political bands which have connected them with another, and to assume among the powers of the earth, the separate and equal station to which the Laws of Nature and of Nature’s God entitle them, a decent respect to the opinions of mankind requires that they should declare the causes which impel them to the separation.

We hold these truths to be self-evident, that all men are created equal, that they are endowed by their Creator with certain unalienable Rights, that among these are Life, Liberty and the pursuit of Happiness.—That to secure these rights, Governments are instituted among Men, deriving their just powers from the consent of the governed,–That whenever any Form of Government becomes destructive of these ends, it is the Right of the People to alter or abolish it, and to institute new Government, laying its foundation on such principles and organizing it’s powers in such form, as to them shall seem most likely to effect their Safety and Happiness.  Prudence, indeed, will dictate that Governments long established should not be changed for light and transient causes and accordingly all experience hath shewn, that mankind are more disposed to suffer, while evils are sufferable, than to right themselves by abolishing the forms to which they are accustomed.  But when a long train of abuses and usurpations, pursuing invariably the same object evinces a design to reduce them under absolute Despotism, it is their right, it is their duty, to throw off such Government, and to provide new Guards for their future security…

We are living under a system of absolute Despotism.    The ironic twist is that the revolution and replacement of our government was not initiated by The People.  It was initiated as an inside job from the highest level of government by Bill Clinton and Al Gore and their “reinvention of government” program.

In 1992, in Rio de Janeiro, there was a gathering of 100 heads of state plus an unknown number of freaks, fruits, nuts and pagan earth worshippers.  Al Gore headed up the delegation of U.S. Senators.  The objective was to get consensus on a comprehensive plan for controlling all of the world’s resources.  The name of the plan was Agenda 21.  Control of the world’s resources takes not only our lives by taking the means by which we live; it takes the means by which all of the people of the world live.  Agenda 21 is the ultimate communist plan for control of people through control of the means by which they live – the environment.

On January 26, 2016, there was a memorial rally for Robert “LaVoy” Finicum who was murdered in an ambush set up by the FBI and Oregon State Police.  Recall that Finicum along with Ammon Bundy and others occupied the Malheur National Wildlife Refuge on January, 2, 2016 to gain world attention for the abuse of prosecutorial authority applied in the Hammond Case and to demand that the land surrounding the Hammond Ranch be returned to the control of Harney County and the people of Oregon.

At the memorial rally, there was a woman with brochures printed by the BLM.  The following is a scanned image of one of the pages of the brochure that was printed in April 2002.    The red arrow was added to highlight the text above it. 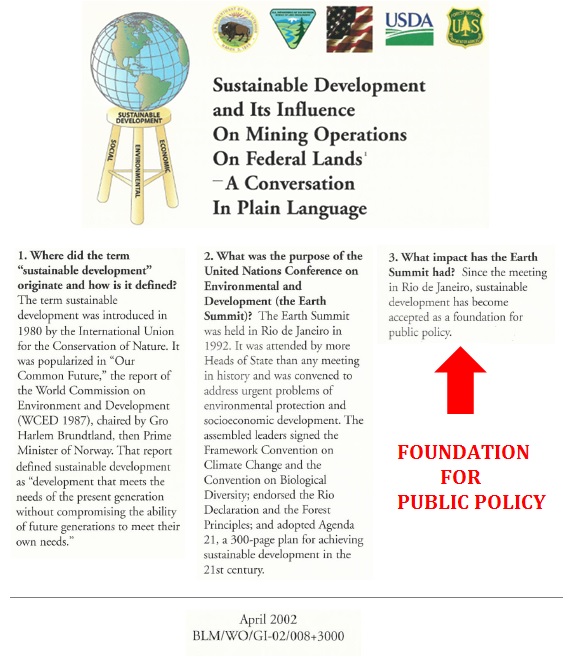 In effect, they changed the mission of the BLM from management of public lands for multiple use to an agency charged with moving people off the land, into the cities and locking up American resources and changing the way of life in the west. 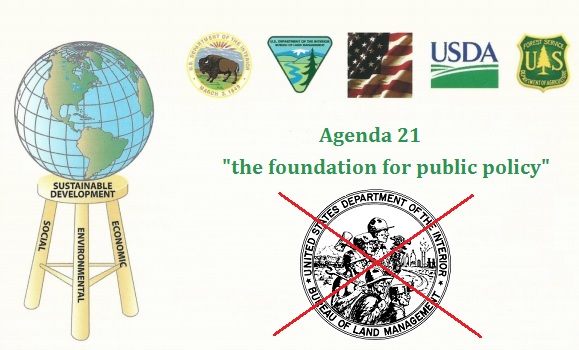 On October 18, 1993, the President’s Council on Sustainable Development held its second meeting.  William Ruckelshaus was a member of the PCSD Council.   At that meeting he talked about the Council using the Brundtland Commission’s definition of sustainable development.

It should be noted that Ruckelshaus was also a member of the Brundtland Commission and he was the U.S. Representative at the United Nations Conference on the Human Environment in Stockholm, Sweden in 1972.   In a highly suspicious twist, Ruckelshaus was appointed to be the Director of the FBI following Watergate.   There was nothing in Ruckelshaus’ background to qualify him for that position.

The World Economy: A Common Responsibility

The Socialist International held its twentieth Congress at the headquarters of the United Nations in New York on 9-11 September 1996. More than one hundred and fifty parties and organisations from every continent took part.

. . . The XX SI Congress, which was opened by our President, Pierre Mauroy, had on its agenda three main themes: ‘Markets serving people, not people serving markets’, ‘Making peace, keeping peace’ and ‘A human rights agenda for the twenty-first century’.

Brundtland Report  (note:  a fellow researcher and I retyped this report to make a readable, searchable copy of it.)   An original copy of the report can be found  HERE.

By way of restatement, the purpose of the above is to remove all doubt concerning the imposition of Agenda 21 on the American population.  Using international agreements and international socialist doctrine the organization that masquerades as the American government has been stealing our lives by stealing the means by which we live and they have been doing it behind the propaganda of protecting the environment.