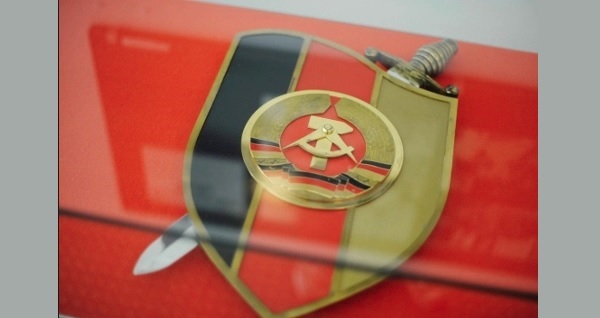 Posted By: Vicky Davison: May 08, 2016In: MichaelNo Comments

We have an East German style STASI network with  inoffizielle Mitarbeiter (IMs) operating in the United States and it’s time to shine the light. 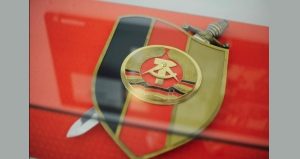 For the two days, the internet has been alive with rumor, innuendo and outright lies about Michael Emry, TVOI News and anybody associated with him. As a rule, I don’t pay much attention to Facebook, Tweets, Blogs and yellow journalism from the mainstream media but I’ve been unable to avoid a lot of it because people keep sending me stories and links. There was one link to a coven of Tweeters that did capture my attention though. It’s the tweet thread of a woman named JJ MacNab (another one of those names that seems selected for the function that she serves). 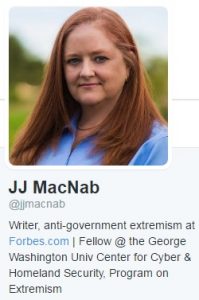 JJ MacNab writes for Forbes Magazine covering “the fringe”.  She has quite the bio on Forbes – don’t miss it.    What caught my attention however, is that she is a Fellow @ George Washington University Center for Cyber & Home[s]cam Security, Program on Extremism.

(Note:  I refuse to call it Home _and Security because it’s Homescam Security and it has been since its inception which was before 9-11.)

Here is a link to the website of the  Center for Cyber & Home[s]cam Security.    Go down through the list of the Board of Directors and do a few search on the organizations named.

Cilluffo is joined by two co­chairs, Mr. Norm Augustine, former Chairman and CEO of Lockheed Martin, and Dr. Ruth David, President and CEO of the Department of Homeland Security’s Federally Funded Research and Development Center, as well as more than a dozen senior homeland security leaders that together possess a wide range of expertise and professional experience.

This is the information I gathered about Ruth David and her Homescam Security Activities.

These are just a couple of the pages of information I gathered about Lockheed.   How Savi is NASCO? showing the connection between Lockheed and Hutchinson Port Holdings (HPH) which was a front for the Communist Chinese military.  The Coup d’etat.   New Paradigm Means New Rules.

The point of all the above is to demonstrate how connected the Center for Cyber & Homescam Security aka Homeland Security Policy Institute (HSPI) is to the Department of Homescam Security that is operating as a government agency that concerns itself with domestic security.

The fact that JJ MacNab writes for Forbes on the subject matter that she is involved with at the Center for Cyber & Homescam Security makes her a government operative (STASI) embedded in the media posing as a journalist and her coven of tweeters are the inoffizielle Mitarbeiter (IMs) that fetch and carry for her.   The bias in the tweets is clear and negates the Center’s policy of being unbiased.

The following are images of the conversation thread that captured my interest:

Les [Zaitz] was mentioned in one of the tweets.   Here is the link to Les Zaitz’ Twitter Account.

You’ll notice right away that Michael Emry is the star of Les Zaitz current reporting and he wrote an article saying that Michael is a bomb maker and that he bought the explosive material from “an acquaintance”.   Really?   It was a casual encounter?  Hey Buddy can you spare some C4?     Then Les wrote “Emry escaped prosecution, apparently for testifying against the drug dealer”.

So Les wants you to believe that the government allowed a mad bomber to go free so that they could convict a drug dealer…lmao!   [Sometimes the stupidity just cracks me up.]      In the article, Les quotes a few of the things that Michael said during his testimony so I read the testimony too.   I have to admit, I was

aghast but it was like reading the testimony of Gomer Pyle (love ya Michael :).    He was horrifyingly honest, respectful   and totally forthcoming.   When I got to page 50 of the transcript it said:

THE COURT:  And, you know, I don’t know exactly where this is headed, but if we’re going to get in any Fifth Amendment issues, we certainly need to make sure this gentleman has a lawyer.

So Michael didn’t have a lawyer which means that he didn’t escape prosecution for testifying against the drug dealer because if he had been charged with a crime, he would have needed a lawyer to negotiate the deal.    Michael had to have been working as a Confidential Informant for the government just like he said.  That’s why he didn’t need a lawyer.

Zaitz’ article goes on …blah blah blah … but then he has a very curious ending to his story.  Zaitz or someone he knows (coven?) apparently called Jim Weaver, the owner of the gun shop where Michael worked:

“He left the shop before Weaver sold it about 10 years ago but the men stayed in touch from time to time. They last spoke about a year ago, Weaver said..

Then, about a month ago, Weaver took one of his specialty weapons out of a storage vault to photograph it for possible sale. It was his .50-caliber Browning MP machine gun. Weaver said that after taking the pictures, he stored it in a “non-obvious place.”

On Saturday, he discovered the gun missing but saw no sign of a break-in and said he was the only one with a key to the building.

The serial number, he subsequently learned, matched that of the gun the FBI recovered in John Day.”

What’s wrong with that story?

So where did Zaitz get the information he quoted?   If Weaver said that he learned that the serial number on the gun that Michael had matched his .50-caliber Browning, that was lie because the serial on the gun part that Michael had was “obliterated”.  So is Zaitz a journalist playing cop or is he a functionary of the Homescam Security Department playing journalist embedded at OregonLive like JJ MacNab is embedded at Forbes?

I have one more case to add before concluding this.  In 2013, there was a legislator named Mark Patterson representing some district in Idaho.  Rep Patterson apparently sponsored a piece of legislation that made the Ada County Sheriff Gary Raney upset.  “Raney deployed ISA Executive Director Vaughn Killeen – former Ada County Sheriff and a man named Mike Kane to lobby against Patterson’s bill.  Raney’s lobbyists succeeded in killing the bill so Mark Patterson filed a complaint against Kane and Killeen.  Patterson won that skirmish.  The day after that happened, Sheriff Raney revoked Patterson’s concealed weapons license on the grounds that Patterson failed to disclose a withheld judgement on an assault charge nearly 40 years earlier.  Mark was exonerated and the case was sealed 1976.

It got ugly when a local reporter, Dan Popkey got the story from “somewhere” and it all went downhill from there.   It’s a very detailed story with the unhappy ending that Mark Patterson was forced to resign his position as legislator and to protect his family, they had to move away.     Mark always assumed that Sheriff Raney gave Popkey the story unofficially and then Popkey turned around and made official inquiries about it.  But if Popkey was an embedded functionary of the Department of Homescam Security like JJ MacNab and [upon belief] Les Zaitz, then that would explain how Popkey got information on a 40 year old sealed case.

I don’t think I have to expound upon the dangers of a STASI network of Homescam Security functionaries operating as embedded reporters in our local newspapers and how their covens of Tweeters can convict and destroy a person even if there has been no wrong doing.  If I’m correct – and I do believe I am, it does explain why the crime wave among local politicians is allowed to flourish while citizens who try to correct problems end up being painted as the bad guys.

The tweeting covens that surround the functionary embeds of the Department of Homescam, are like a pack of dogs waiting to be sent on a destroy mission and for them, it’s just a game.   Where in the world is Carman Santiago?

Following the tweet path for one of JJMacNab’s tweeters, I found this.  It must be the hit list for elected representatives that Homescam Security and the coven find disagreeable.