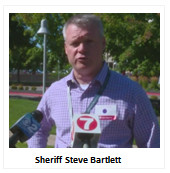 A couple of days ago, an Eagle police officer was shot by a fleeing suspect just outside of Star, a farm town in Idaho.  Sheriff Steve Bartlett of the Ada County Sheriff’s Department gave a news conference about the incident.  The second video in this article is Sheriff Bartlett giving his report.

It just so happens that I had a map of the area because for quite a few years now, I’ve been following a story about it and 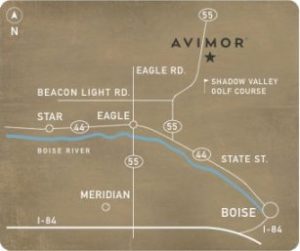 this shooting story of an Eagle police officer (new – only at the department for about a year) fits as another piece in the puzzle I’ve been constructing.  A few miles to the east of Star on the map is the Canyon County line.  Notice that the location of Meridian is to the south and Boise to the southeast.

It should be noted that Boise has a new Chief of Police, Ryan Lee hired just a couple of weeks ago.  Lee’s prior position was with the Portland Police Department.  There was a news article announcing his appointment with a link to the Portland Police Department website.   The news article doesn’t exactly correspond to the  bio of Lee that was posted (I had to go to the Internet Archive to get it).  Here is a link to the org chart.

Yesterday, there was an article posted on MSN that has more details about the shooting.  The suspect is 21 year-old Matthew S. Kelly of Emmett, Idaho.   Emmett, Idaho is just over the hill from where the shooting occurred between Star and Eagle.  According to the story, Kelly stole a yellow motorcycle from a home in Canyon County and he was using it as his getaway vehicle.

According to the article, the city of Eagle contracts its police force from the Ada County Sheriff’s Office (ACSO) so the officer involved is not actually an employee of Eagle.  He’s an employee of the ACSO.  The following are excerpts from the article that sound a sour note:

The Eagle officer, who has not yet been identified, tried to stop Kelly, who was driving a yellow motorcycle, near the intersection of Beacon Light Road and Idaho 16 north of Star on Monday morning. Kelly got off the motorcycle and the officer tried to get out of his car to follow on foot, Bartlett said.

“Initial information indicates it was when the officer stopped his patrol car to investigate that Kelly opened fire, shooting into the officer’s car, hitting and injuring him,” the Sheriff’s Office said in a Monday evening news release. “The officer then returned fire.”

An article by Idaho New 6 reported:

“The suspect apparently shot an Ada County Sheriff’s Office deputy at around 7:30 Monday morning. The Ada County Sheriff’s Office describes the suspect as a slender white man with short facial hair wearing a puffy dark green jacket, jeans and a blue bandana. He is considered to be armed and dangerous and was last seen on foot in the area of Highway 16 and Beacon Light.

The description given by Sheriff Bartlett in the first report said that the suspect had a beige backpack.   So what we have is a guy who is in a different county who stole a yellow motorcycle wearing a beige backpack and a blue bandana presumably on his head.  The motorcycle malfunctions just at the point the Sheriff’s Deputy who works for the Eagle Police Department is right behind him.  The suspect jumps off the motorcycle and fires at the police car (sounds like an accidental hit on the Officer) and then takes off running into the corn. The suspect’s father happened to be riding his motorcycle in the area was apprehended by police and they used him – via Matthew’s cell phone to have Matthew surrender by walking out of the cornfield.

Nobody ever accuses street criminals of being smart, but this caper within the context of the scenario seems a little suspect. If that sounds a little conspiratorial, consider this story about the “Treasure Valley Law Enforcement Partners” multi-jurisdictional training including Nampa Police, Ada County Sheriff’s Department, Boise City Police, Canyon County Sheriff’s Department, Meridian Police, Nampa Fire, and Ada County and Canyon County Paramedics. Many volunteers as well as CWI staff and students were also on scene to take part in the experience.

As I mentioned above, the location of the incident is what drew my attention to this story as well as the many jurisdictions involved.  Sometime between 2005-2006, I was working with Idaho Eagle Forum.  We received a request from a group called Citizens for Smart Growth in Star, Idaho.  They wanted us to find out what could be done to stop Star Mayor Nathan Mitchell from turning their farm town into a California style bedroom community.  Ada County with the support of Mayor Mitchell had approved a 600 home development near Star.  Star did not have the infrastructure nor the roads for a development that big and there really wasn’t a market for the homes anyway because there were mass layoffs happening in the few large corporate (non-hospital) employers in Boise.  We agreed to take a look at it and that look has turned out to be a sporadic 15-year odyssey of discovery.    The following is just a quick overview of the congruences that captured my attention:

The homes were being built by Avimore, the parent company of which was SunCor, an Arizona corporation that was a wholly owned subsidiary of the Arizona Public Service Company, the largest supplier of electricity in Arizona.  The fact that the group’s name that requested the research included the term “smart growth” was an indicator that Agenda 21 was involved.  It involved metropolitan land use planning, “Metropolitan Planning, in its simplest form, means performing a federally-prescribed process through which priorities are set for expending US Department of Transportation funds for highways and public transportation throughout a metropolitan region”.

The Department of Transportation and COMPASS, the Metropolitan Planning Organization for Ada and Canyon counties had a plan for a 5-county regional transportation plan called Communities in Motion.  The five counties are Gem, Elmore, Payette in addition to Canyon and Ada Counties with Boise, the capitol city being the major population hub of the plan.

On the COMPASS page linked above, is the following statement:

The plan for Boise as the hub was called the Blueprint for Good Growth.  The following excerpts from the flyer about the plan:

The Blueprint for Good Growth is a guide for coordinating future growth decisions throughout Ada County. The Blueprint will better integrate land use and transportation planning.

Aside from addressing these major issues, the Blueprint outlines recommendations to implement the policies established to address each goal. These strategies include:

• Tiers Map. Local governments should review zoning maps and zoning district requirements to ensure that they are consistent with and promote the implementation of Blueprint policies.

• Coordination with Other Agencies

The idea for a forum of public officials from local surrounding communities was put forth by Christine Saum, Executive Director of the Mayor’s Institute on Cities and Dena Belzer, an economist from Berkeley, California.  They knew Boise’s Mayor Brent Coles from an earlier Mayors’ Institute and they suggested a regional forum.  Coles took the bait and he sponsored the forum including elected officials from nine local jurisdictions.  Ultimately they ended up signing an agreement to create a 501-C3 called the Treasure Valley Partnership but in a history of the partnership, they indicate that the first multi-jurisdictional agreement was for police and emergency services:

“We limited the partnership to one elected official from each governing board,” Conner explains. “Some people have suggested we widen it, and we’ve discussed that each year, but the key issues on people’s minds are the things that these localities have to work out. There’s really two big issues: land use, and police powers. Only the municipal elected officials can deal with those.

“Before the Partnership, police in one city or county couldn’t arrest suspects across jurisdictional lines. They had to go through a complicated process to follow, arrest and prosecute criminals. And ambulances couldn’t assist people in cases where they were over the county lines, even if the “appropriate” ambulance was much further from an accident! We got an early win during the first year when the Partnership members began to sign memos of understandings (MOUs) allowing their respective ambulances and police officers to cross jurisdictional lines.”

You can read the timeline I produced which was the best I could do at the time because I couldn’t figure out what they were doing but it didn’t sit well with me.

The focus this time around is regional 911 services which were implicit in the above excerpt from the partnership history.  Emergency services and emergency rooms are part of the transportation system because in the 1960’s when they became “a thing”, the idea was to transport accident victims to the hospital as quickly as possible.  Initially, there were no medical services offered, just ambulance transport.  (Highway Safety Act of 1966).