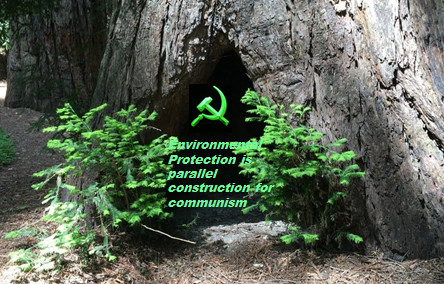 When doing analysis, one has to start out with a few assumptions.  That doesn’t mean those assumptions will continue as more information is gathered but there has to be a starting place.  The assumption to which I refer is that an agency of government starts out clean with good intentions when its created but over time, the agency’s regulatory function becomes captured by special interests.  That was the view I held of the Environmental Protection Agency (EPA) – until I began researching Climate Change.

On November 9, 1989, then EPA Administrator William Reilly gave the lecture at the James Marshall Annual Lecture event sponsored by the Natural Resources Defense Council (NRDC).  The title of the speech given by Reilly was The Turning Point: An Environmental Vision for the 1990’s.

For perspective, it’s useful to know that the date stamp on this broadcast is November 28, 1989.  The Berlin Wall was breached on November 9, 1989.   President Bush met with Mikhail Gorbachev on a ship near Malta between December 2-3, 1989 the outcome of which was to end the Cold War.  In prior research, a clip of Deputy Secretary of State Lawrence Eagleburger speaking on December 1, 1989 about the agenda of the Malta meeting, he mentioned that Gorbachev wanted to talk about a condominium (power sharing agreement) between one or more nation-states.  This becomes key to understanding environmental protection for North America.  (2nd to the last video in the link).

The Turning Point: An Environmental Vision for the 1990's

When William Reilly said that the NRDC was the shadow EPA, it was a full-stop moment.  One might be tempted to think that Reilly was just flattering his friends at the NRDC.  This article explains why I don’t think so.  The NRDC was founded in the same year as the EPA – 1970.  The Ford Foundation provided the initial funding.

NRDC was founded in 1970 by a group of law students and attorneys at the forefront of the environmental movement.

NRDC works to safeguard the earth—its people, its plants and animals, and the natural systems on which all life depends.

From the Yale University archives:

The Natural Resources Defense Council (NRDC) was founded in 1970 as an environmental action organization by a group of American attorneys and law students.

With initial funding from the Ford Foundation, NRDC opened its first office in New York City and established a Board of Trustees. Originally structured like a traditional law firm, NRDC’s senior attorneys operated as partners. The organization focused its early efforts on litigation to ensure the enforcement of the 1969 National Environmental Policy Act, the Clean Air Act of 1970, and the Clean Water Act, passed in 1972 . . . In 1973, the group hired its first staff scientists to provide thorough scientific analysis of environmental harm and offer feasible remedies to significant environmental problems.

A podcast interview of John & Patricia Adams of NRDC at the 40th Anniversary of the organization was found.

Podcast – Looking Back at 40 Years of Environmentalism with NRDC’s John & Patricia Adams, November 15, 2010.

There is a significant tidbit in it:

The next thing that happened is we applied for a tax exemption. The environmental laws were being passed, the Clean Air Act, the Clean Water Act, but Richard Nixon had a trick up his sleeve, and he did not want radicals bringing lawsuits, and so our tax exemption was blocked. We then spent six months, seven months, eight months fighting to get the tax exemption. It was a bitter, bloody fight that cost us all of the resources we had, and almost killed us off.

There is interesting timing here that I didn’t realize before.  I don’t know that it’s related but by the same token, I don’t know that it isn’t.  On May 23, 1972, President Richard Nixon signed an Environmental Cooperation agreement with the Soviet Union.

The Watergate Scandal began on June 17, 1972 with the arrest of five burglars who broke into the DNC headquarters.   That caper brought down Nixon’s government.  This is just a sketch of the succession:

In April of 1973, Ruckleshaus was moved to be the Acting Director of the FBI (see Saturday Night Massacre),  Spiro Agnew, Nixon’s Vice President resigned on October 3, 1973.  Nixon appointed Gerald Ford to take his place.  Nixon resigned because of the Watergate scandal and  Gerald Ford became our first unelected President on August 9, 1974.  Ford appointed Nelson Rockefeller to be Vice President.

I’m sure that the NRDC got their tax exempt status and Gerald Ford went on to sign the Helsinki Final Act agreeing to work cooperatively with the Warsaw Pact countries.

Helsinki Commission (Commission on Security and Cooperation in Europe)

Helsinki Process  (look at the baskets of cooperation)

Russell Train gave the introduction for William Reilly at the lecture.  Russell Train was appointed by President Nixon to be the first Chairman of the Council on Environmental Quality (CEQ).

The CEQ recommended establishment of the Environmental Protection Agency and William Ruckleshaus was appointed to be the first EPA Administrator.

The one new piece of information in this video was that William Reilly was on Russell Train’s staff of the Council on Environmental Quality in 1970.   The significance as you can hear from Reilly, is that there is a very small group of people who seem to cycle in and out of the EPA’s leadership positions with hiatus periods between administrations spent at one of several major environmental groups.  The most recent case in point is  Gina McCarthy.   McCarthy served as the 13th Administrator of the EPA.   She went from the EPA in January of 2017 to being President and CEO of the NRDC.   McCarthy came front and center to the American people when she tried to take control of every lake, river, stream, canal, mud puddle and dry creek bed in the United States with the Waters of the United States rule.

In reading Russell Train’s biography probably for the fourth time, I saw something that clicked:

Earlier in his career, Train served from 1949 to 1956 as Attorney, Chief Counsel, and Minority Advisor on various Congressional committees, then from 1956 to 1957 as Assistant to the Secretary and Head of the Legal Advisory Staff for the Treasury Department.

Train was born in 1920 in Jamestown, Rhode Island, and graduated from Princeton University (B.A., 1941) and Columbia University Law School (J.D., 1948). He was married and had four children.

Recall that the Cox hearing to investigate Tax Exempt Foundations began in November of 1952.   So what committees did Russell Train work for?  Train’s records are in the Library of Congress but the Finding Aid is published online.   The following is extracted from that:

1953-1955, Clerk and minority advisor, House Committee on Ways and Means

Page 5 of the Finding Aid:

However, most of the material related to foreign affairs in this file focuses on the Soviet Union and the establishment by treaty of the Joint US-USSR Committee on Cooperation in the Field of Environmental Protection.

1972 the U.S. signed a treaty with the Soviet Union for Environmental Cooperation about a month before the Stockholm Convention on the Human Environment. 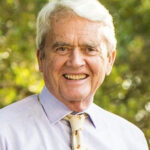 . . . he was the Founding Partner of Aqua International Partners, a private equity fund dedicated to investing in companies in the water sector.  He was Administrator of the U.S. Environmental Protection Agency from 1989 to 1993, during which he led efforts to pass a new Clean Air Act and headed the U.S. delegation to the UN Conference on Environment and Development in Rio in 1992.  He served as president of World Wildlife Fund and later chairman of the board; president of The Conservation Foundation; and director of the Rockefeller Task Force on Land Use and Urban Growth.  President Clinton appointed Mr. Reilly as a founding Trustee of the Presidio Trust of San Francisco. 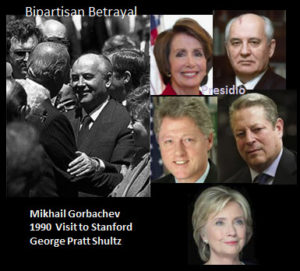 From Swords to Plowshares – Gorby at the Presidio

Note:  Base closing commission; Russell Train was on the Base Closing Commission; research hubzones.

Social Engineers for Gaming the Public

Environmental Public Interest Law – “In the late 1960s, the Ford Foundation experimented with a new strategy to effect public policy change—funding public interest law centers. The Foundation directed this strategy at environmental policy and resource conservation in 1970 when it gave a conditional grant to the newly incorporated Natural Resources Defense Council (NRDC) for $410,000 and later gave similar grants to EDF, the Sierra Club Legal Defense Fund, and the Southern California Center for Law in the Public Interest.”

Merge with the Soviet Union?

In 1953, Norman Dodd was the Director of Research for the House Special Committee to Investigate Tax-Exempt Foundations. The Chairman of the Committee was B. Carroll Reese. Prior to the Reese Committee, there was a House Select Committee to Investigate Tax-Exempt Foundations and Comparable Organizations. The Cox Committee did not complete their work due to the untimely death of the chairman, Eugene E. Cox. The Reese Committee picked up where the Cox Committee left off. The transcripts from the hearings can be found HERE. You’ll see Mr. Dodd’s testimony in May of 1954.

The un-American activities of the Foundations went green and achieved  communist victory in 1970 when they got a government agency of their own.