Home Corruption From Swords to Plowshares

From Swords to Plowshares

On June 4, 1992, Nancy Pelosi put a statement on the Congressional Record titled From Swords to Plowshares. The speech suggested that the Presidio – the historic Army military base in San Francisco would be an ideal location for former Soviet President Mikhail Gorbachev’s new Foundation – the Gorbachev Foundation, USA.  According to Pelosi:

Conversion of this post is a perfect illustration of the swords to plowshares idea and a chance to create a place for global cooperation and leadership on environmental issues…As the cold war ends, it is, indeed, fitting that this army garrison–one of the oldest in the United States–will be transformed to a monument to peace, environmental preservation, and recreation as a global park. 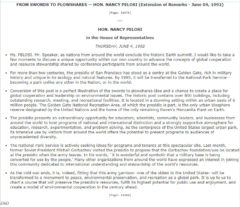 San Francisco was a special place to Gorbachev as it reminded him of  Vladivostok.  That the availability of the Presidio for a global center of environment activism and co-operation came available at precisely the right moment in history is an incredible coincidence right?  (yeah right).   In 1993, the San Jose Mercury News published an article about a speech given by Gorbachev at De Anza College.

“Friday he inaugurated the Gorbachev Foundation USA, which is moving into new headquarters in the Presidio in San Francisco.

… Gorbachev announced that the foundation is creating a national task force on U.S. military base closings. It will be co-chaired by former San Jose Mayor Tom McEnery and former Democratic Rep. Mel Levine of Southern California.

The group will call for a national conference of the 36 U.S. communities that the base closings affect.

The Mountain View-based Center for Economic Conversion will be a partner in the project.

He said it is appropriate for Gorbachev’s foundation to sponsor the task force because the former Soviet leader was responsible for the end of the Cold War.

So, a Center for Economic Conversion (CEC) partnered with the Gorbachev Foundation, USA for some purpose having to do with closed military bases was worth a look see especially since San Jose Mayor Tom McEnery published a book in September of 1994 titled, The New City-State: Change and Renewal in America’s Cities with a Foreword by Richard Daley, Jr. Mayor of Chicago.

Swarthmore College has the records for the CEC.   The following is the description of the organization:

The Center for Economic Conversion was located in Mountain View, California. It was a nonprofit organization which promoted the conversion of the military-based U.S. economy to a civilian-based, peace-oriented, and environmentally sustainable one.  It was founded in 1975 as a project of the American Friends Service Committee, but became an independent organization in 1978. The group was originally called the Mid-Peninsula Conversion Project, and changed its name to Center for Economic Conversion in 1982. CEC built coalitions with other peace and justice and environmental organizations to build the conversion movement. CEC was a leading advocate for using military base conversion as a tool to foster sustainable development.

For the record, 1975 was the year that President Gerald Ford signed the Helsinki Final Act with the Soviet Union and leading up to that, in 1972, President Nixon signed the Agreement on Cooperation in the Field of Environmental Protection between the United States of America and the Union of Soviet Socialist Republics.

So the Center for Economic Conversion that was partnering with Gorbachev was a project of the American Friends Service Committee, a Quaker organization.   The Encyclopedia of Greater Philadelphia has a very interesting history page on the AFSC.

[ Just to share some creep factor with you –  they did the Eyes Wide Open campaign.  A few years ago when we were protesting refugee resettlement in the town I live in, I was with a friend and it was a hot summer day.  We ran into the Walgreens store really quick and I didn’t lock my car, nor did I roll up the window.  When we came out of the store, there was a pair of moccasins in the driver’s seat of my car.  It did freak me out but after a couple of minutes of wondering what to do, I picked them up and tossed them out of the car and promptly forgot all about it.  I had no idea what it meant.]

Another interesting page on the AFSC website is the Turning Combat Boots Into Ploughshares so plowshares (ploughshares) is a recurring theme. Notice that there is a link to videos on that page. And they are social justice warriors who want sanctuary cities everywhere and they are a UN NGO.   On their youtube channel, they have a video celebrating 100 years of activism in the peace movement.

It’s very exciting to find a connection between Mikhail Gorbachev and San Jose Mayor Tom McEnery’s idea of City-States in connection with the concept of Economic Conversion.   It’s a EUREKA! moment.   Over the years, I’ve been constructing a thousand piece puzzle that forms a picture of what is happening to our country.  In 2011, the local utility company forced the installation of a smart meter on my home.  As I was fighting with Idaho Power about that, I was also gathering a lot of other information about the energy-utility system.  Pat Woods did a great job of writing about the Smart Grid so I wrote articles that I called Smart Grid: The Rest of the Story.  Chapter 7 of that research is titled: Order of the New World.   The Order of the New World is about privatization and globalization.   There are two links to videos in that chapter.  One is Parag Khanna talking about a borderless world that he (they) want.  The intro to the video that I wrote:

It’s an important presentation because he is talking about the conversion of political systems from those based on political geography (nation-state) to political economy (economic centers). Borders are meaningless when political economy dictates policy. That’s globalization.

The other video is Paul Romer talking about why the world needs Charter Cities –  economic zones with no rules.  In other work I’ve done concerning foreign trade zones (Trojan Triangles), I have research on these that I ultimately determined were ports under international law seaports on the coast and inland ports for locations in the interior.  A Charter City is a proper name for the organization of the administrative zone aka special economic zone that I called an inland port when I found one in Idaho.  One of the articles I’ve written is titled Pirates, Ports and Treason.   Near the bottom of that article is a story about an administrative zone in Honduras.  Those videos describe charter cities even if he doesn’t use the term.

The two concepts – city-states and charter cities (administrative zones) are the means for not just economic conversion but political conversion as well.

In other research that began with the study of the trade agreements and the progressive economic integration of nation-states connected recently to the Helsinki Final Act in 1975, it was discovered that an organization called the Pacific Economic Cooperation Council (PECC) was established in 1980.   In 1992, their meeting was held in San Francisco.  The output from that meeting was the San Francisco Declaration for Open Regionalism.  That research can be found in an article titled The Grand Chessboard of the Trilateralists.  The PECC led to the establishment of the Asia-Pacific Economic Cooperation organization (APEC).   APEC does not refer to their members as countries.  They refer to their members as economies.

Clearly, the plan to end the Westphalian system of nation-states began a few years before the end of World War II.  The United Nations was designed to be the center of global governance.  The plan was to reduce nation-states to economic regions under the UN system.  In 1990 with the signing of the Charter of Paris, the European project for regionalization was complete and focus shifted to the U.S.  In 1993, Mikhail Gorbachev set up shop at the Presidio in San Francisco to “help” in the conversion of our economy to a centrally planned, sustainable economy.  Apparently, the anarchy of the Mayors began in 1993 (if not before) and proceeded with the assistance of legislation passed during the Clinton Administration under the heading of “reinvention of government”  –  reinventing our nation into oblivion.

As if all of that were not bad enough…

Ken Raggio wrote an outstanding article about the Presidio, Gorbachev and the lead up to the transfer of the Presidio to a trust that rented space to not only Gorbachev but a gaggle of leftist groups that support the conversion of our country.

The Presidio had a hospital, Letterman.  The Tides Foundation took it over and made it a “safe space” for the social engineering eco-mmunists to congregate and strategize and coordinate.  Tides gave the name, The Thoreau Center for Sustainability to the collective space for the non-profits.

“Employees and guest of many of the non-profits that call the old Letterman Hospital their new business address enjoy the grounds to the rear of the main building. The Thoreau Center for Sustainability at the Presidio, run by the Tides Foundation, has provided a stable “home” and millions of dollars in rent savings for 70 nonprofits.”

According to the website for the Tides Foundation, Tides is a network of nonprofit organizations. Can you imagine the multiplier effect they get out of this arrangement and organizational structure?

On their Approach page, this graphic was found displaying their organizational structure. 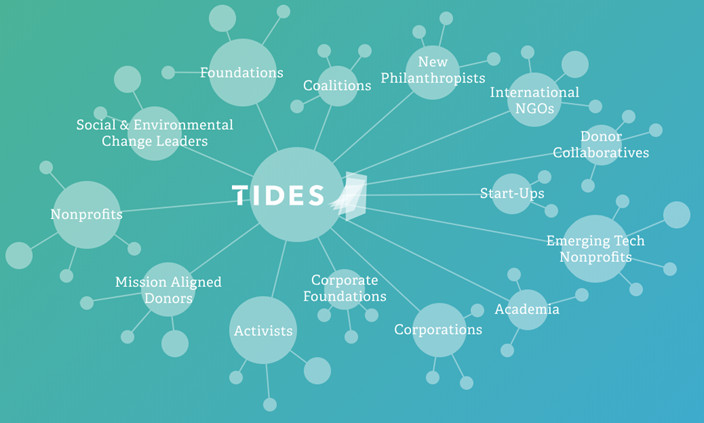 Spend some time on the Tides website looking at their organization and ask yourself, why are our tax dollars supporting (tax deductions) and funding an insurgent organization of organizations that are working very hard to make us a communist/socialist country?  And how is it that the FBI hasn’t found these people?   If the FBI really is looking for Russian collusion, this is where they can find it.