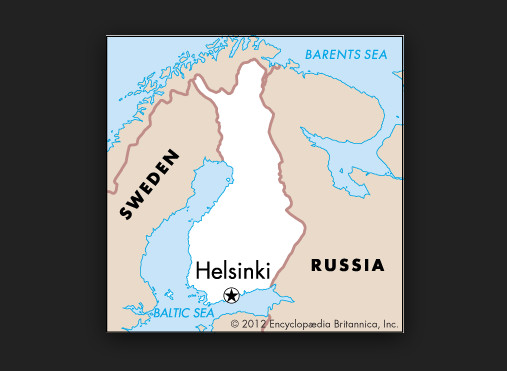 The Final Act of the Conference on Security and Cooperation in Europe was signed in 1975 by Gerald Ford.  The Final Act is more commonly known as the Helsinki Final Act.  It was signed as a politically binding, gentlemen’s agreement for treason to resolve the Cold War differences. 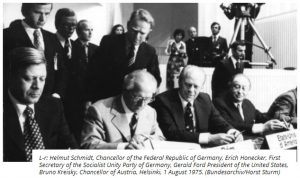 The organization that was created to carry out the principles of the Helsinki Final Act is the Organization for Security and Co-Operation in Europe (OSCE).   The American delegation to the OSCE is the Commission on Security and Cooperation in Europe (CSCE).  It’s an independent government agency comprised mostly of members of the Senate and the House.

The purpose of the Final Act was to establish three thematic areas of co-operation with Eastern Bloc countries.  The thematic areas are referred to as baskets.  They include the following:

Basket I – the Security Dimension – contains a Declaration of Principles Guiding Relations between participating States, including the all-important Principle VII on human rights and fundamental freedoms. It also includes a section on confidence-building measures and other aspects of security and disarmament aimed at increasing military transparency.

Basket III is devoted to cooperation in humanitarian and other fields: freer movement of people; human contacts, including family reunification and visits; freedom of information, including working conditions for journalists; and cultural and educational exchanges. Principle VII and Basket III together have come to be known as the “Human Dimension.”

Principle VII – Respect for human rights and fundamental freedoms, including the freedom of thought, conscience, religion or belief

[Side Note:  the current ration of crap about racism, sexism, etc. in the United States is the left calling forth the demons of international communism – the United Nations and the regional organizations like the OSCE.  It’s a big game… a joke on you by the real terrorists who are the leaders and participants in these international organizations and most especially the communist cell operating inside our congress right under our noses.]

economic, scientific, technological and environmental cooperation, as well as migrant labor, vocational training and the promotion of tourism.

If you still have doubt that this communist cell is operating within our government colluding with the communists of Europe, you can read more of the history of the Helsinki Commission in the Congressional Record:

Statement of Steny Hoyer (MD), June 27, 2001 on the Twenty-Fifth Anniversary of the Helsinki Commission

Statement of Ben Cardin (MD), May 26, 2016 on the Fortieth Anniversary of the Helsinki Commission

Statement of Ben Cardin (MD), May 11, 2006 on the Thirtieth Anniversary of the founding of the Moscow Helsinki Group:

By 1982, the Moscow Helsinki Group had been forced to suspend its activities in the face of intense KGB repression.

The Moscow Helsinki Group was re-established in 1989. Reinvigorated through the work of new and veteran members, it is one of the most respected human rights organizations in the Russian Federation today. Alexeyeva, who returned to Russia in the early 1990s, following the demise of the Soviet Union, serves as chair of the group.

Mr. Speaker, we would do well to heed the wise words of Andrei Sakharov when he noted, ‘‘The whole point of the Helsinki Accords is mutual monitoring, not mutual evasion of difficult problems.’’ A key to the ultimate success of the Helsinki Process has been the involvement of civil society—courageous human rights defenders like those who established the Moscow Group—willing to speak out on behalf of others. I remain deeply concerned over human rights trends in Russia, especially the adoption of regressive laws affecting fundamental human rights and freedoms.

…A key to the ultimate success of the Helsinki Process has been the involvement of civil society—courageous human rights defenders like those who established the Moscow Group—willing to speak out on behalf of others.

Timeline for the Moscow Group

A big part of the research I’ve done has been on visas for foreign workers and foreign investors first because the H-1B visa holders affected my career and the careers of all American IT professionals.  The question I was trying to answer was why is our government doing this to their own citizens?  What possible benefit to the country is there in bankrupting and destroying the lives of it’s own citizens?   What I found is that during the administration of George Herbert Walker Bush, legislation was passed for “migrant workers” and it provided the legislation for mass importation of professionals from the Soviet Union.   (For the record, in this country the term migrant worker was synonymous with Mexican farm workers but the word migrant simply means mobile in the context of Helsinki Basket II.)   It should be noted as well that George Herbert Walker Bush was the chief negotiator with the Soviets during the Reagan Administration.

Summary of the Legislation

Text of the Legislation   Note: References to Helsinki Final Act and National Endowment for Democracy (NED)

Senate Version of the Legislation

Introduction into the House of Representatives

Text of the Legislation As Passed

Just for fun, I went to the Open Society Foundation that is run by George Soros and found a report of the “partner donors” for the Foundation:

International organizations such as the World Bank, the World Health Organization (WHO), UNAIDS, UNICEF, UNESCO/International Institute for Education Planning, the Organization for Security and Co-operation in Europe (OSCE), the United Nations Development Program (UNDP), the European Union, the Council of Europe, the Global Fund to Fight AIDS, Tuberculosis and Malaria, the European Commission, African Commission on Human and Peoples’ Rights, and the Asian Development Bank.

National governments in several countries, including Germany, the Netherlands, Sweden, Switzerland, the United Kingdom, and the United States, that cofund programs sponsored by Soros foundations in those countries, especially in education.

Center on Budget and Policy Priorities for its expertise on budget and tax policy questions in the United States, and also for its International Budget Project, which promotes budget transparency and accountability in transition countries

Center for Community Change for its efforts to give low-income people a voice in
American democracy, and the American Institute for Social Justice for providing staff  and leadership training, technical assistance, research, and strategy support on issues relevant to this group

Council of State Governments for providing state legislators and policymakers in the United States the resources to establish effective public policies and government programs, and the Progressive States Network for connecting progressive state legislators around common principles and developing campaigns on these issues

Coincidentally, there was a program on C-Span that was about the Community of Democracies.  Secretary of State Rex Tillerson spoke at the event.

As I put this information all together… it makes me wonder – who are these people that are pretending to be the government and representatives of the American people?  They are neither.   They are pretenders working towards global communism and they are using our domestic telecommunications network – the Internet to try and make Americans believe that globalism and global communism are elements of America’s mission in the world and are consistent with American values and interests.