In 1953, Norman Dodd was the Director of Research for the House Special Committee to investigate Tax-Exempt Foundations and Comparable Organizations.   Shortly before Mr. Dodd died, G. Edward Griffin did a taped interview with Mr. Dodd.  The full interview is posted on youtube HERE.    The stunning revelation from the hearings was that the mission objective of the largest foundations – under directives from the White House (Norman Dodd recalling what Rowan Gaither told him):

we shall use our grant making power so to alter life in the United States that it can be comfortably merged with the Soviet Union.

In 1905, the World’s Fair was in Liege, Belgium.  The World’s Fair was an event started in London in 1851.  It was organized by Merchants of the day at the beginning of the Industrial Revolution.  At the 1905 Fair, the Merchants were sufficiently organized to hold the first meeting of the International Congress of the Chambers of Commerce and Commercial and Industrial Associations.  This history is documented in a book titled, Merchants of Peace by George L. Ridgeway, Professor of History, Wells College and was published by the Carnegie Foundation for International Peace, 1938.  The international businessman’s conspiracy against sovereign nations was stated plainly in the book:

“There must be a united front formed by businessmen for the overthrow of the old regime of armaments.”

“The abolition of trade barriers can no longer be considered as merely helpful circumstances contributing to the peace of nations.  Trade barriers are today revealed as the substance of the military regime of a feudal national sovereignty.  Economic disarmament is the crux of military disarmament.  It has become evident that capitalism  can only break through the armaments regime at this point.  And it is obvious that this break cannot be accomplished by violent frontal attack upon economic sovereignty.  It must be brought about by the substitution of international cooperation for isolated national action….Events have rendered obsolete the philosophy of a static international political world divided in perpetuo into national feudal territories under the rigid control of the privileged have as against the have-nots of the society of nations.”   [full text of the excerpt HERE ]

The image below was captured at the website of the International Chamber of Commerce – in their history section.  They’ve since moved the picture from the location where it was found and they apparently deleted their history from 1977 to 2001.   This is not surprising given the magnitude of the conspiracy against the people of the world. The June 21, 1990 meeting with George H. W. Bush meeting of the International Chamber of Commerce (ICC) and the United States Council for International Business (USCIB) was especially significant because 1990 was the year the race to end the United States as a sovereign nation under the Westphalian system of geographically defined nation-states began and the elitist movement to establish a global governing system comprised of business and non-profit, socialist engineers began. 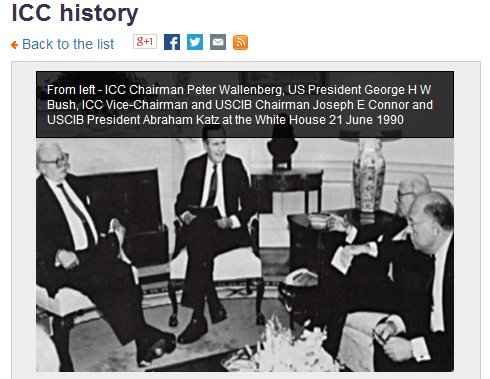 ruled by an unelected, unseen soviet – committee of ruling commissars.  Obviously that meant the end of American sovereignty and the rights and dignity of the common man under a Constitutional form of government.  On September 11, 1990, George H.W. Bush gave the speech in which he mentioned the New World Order – keeping in mind that the UN’s founders were communists…

International Co-Operation Under a Ruling Soviet

It’s well documented how the sovereignty of the European countries was subverted using what were alleged to be trade agreements along with money and mandates supplied by the Marshall Plan OEEC (OECD).  The end result was the establishment of an unelected, untouchable European soviet (European Commission) that rules over Western Europe.

Traitors to the United States have used the same strategy of subversion – economic warfare through agreements that were presented as trade agreements.   What these agreements actually were – are agreements for “international co-operation” exactly according to the plan of the Merchants – global businesses.

[Side Note:  communism is the economic system for a fascist political system. Socialism is methodology for conversion to a fascist-led system of communism. Capitalism becomes Fascism when businesses have more money and power than the government and that can only happen through subversion of the government…]

Recall that Norman Dodd said that the large non-profit foundations were being used as social weapons against civil society for the purpose of changing life in the United States to be able to merge the United States with the Soviet Union under a communist system.  The organization to facilitate that merger was established in 1975 as a result of signing the Helsinki Final Act.

In 1972, Nixon signed arms limitation agreements with Leonid Brezhnev.  In 1973, an agreement was reached to define the process (Helsinki Process) to begin a regime of formal negotiations for social and economic co-operation with Eastern Bloc countries on internal domestic issues and policies.  The negotiations ended with an agreement called the Helsinki Final Act signed in 1975 by Gerald Ford and Leonid Brezhnev, and the two Germanys, Helmut Schmidt and Erich Honecker.

Members of the U.S. Congress created the Helsinki Commission in response to activists in the Soviet Union and the countries of Eastern Europe who saw the Helsinki Final Act as a new opportunity to press governments to improve their human rights records and allow, despite Europe’s division, expanded contacts between people.  CSCE History.

Public Law 94-304 of June 3, 1976, established the Helsinki Commission, authorizing and directing it “to monitor the acts of the signatories which reflect compliance with or violation of the articles of the Final Act…with particular regard to the provisions relating to human rights and Cooperation in Humanitarian Fields.” The mandate extends to other areas covered by the Final Act, including economic cooperation and the exchange of people and ideas between participating States.