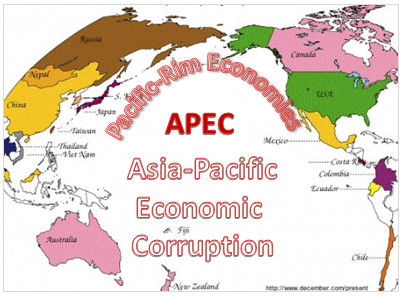 From the end of World War II, the Soviet Union and the West were in a face-off with the line of demarcation in Berlin.  In the 1980s, Mikhail Gorbachev changed the game.  He did an about face turning his back on the west in Germany and began facing east towards the west on the Pacific side of the Soviet Union.

When he did that, he set aside the military playbook and he picked up the civilian playbook of war on economic and cultural terms – war in the context of everything else.

Strategic Policy Development Before the Fall of the Wall

The timeline of Gorbachev’s policy development reveals that he had three things in mind:

Gorbachev’s new strategy begins with a port city and trade.  The following is a segment of the timeline as it pertains to transportation:

• The United Nations Economic and Social Commission for Asia and the Pacific (ST/ESCAP/2303) published in 2003, includes the following information about the ALTID project:

In 1959, the Asian Highway project was conceived partially to resurrect those dreams, of trade and travel and to bring the world closer together. In doing so the Asian Highway promotes social progress and better standards of life in larger freedom as laid down in the preamble to the Charter of the United Nations.

•  In the mid 1980’s, Secretary of State George Schulz was working with Mikhail Gorbachev selling him on the idea that a totalitarian government would not be able to withstand the information age that was just on the horizon.

•  On July 28, 1986, Mikhail Gorbachev gave speech at Vladivostok, Russia concerning his new thinking on opening up the Soviet Union to the world.  Vladivostok had been a closed city since 1951 because it was a port city where Soviet military assets were located and operations were launched.   In an article published in the LA Times in 1987, the author wrote that Soviet officials acknowledged that satellites provided better information than spies on the ground so there was no longer a purpose behind keeping Vladivostok a closed city.  The following are significant excerpts:

At the same time, reopening the city would advance Kremlin plans for increasing Pacific trade and speedier economic development of the Soviet Far East.

Gorbachev, speaking in Vladivostok last July, said he would like to see the city become “our wide-open window to the East.”

But he linked a decision on removing travel barriers to an improvement in the overall political situation in the Pacific region.

“International communications in the Pacific zone will be improved,” he went on. “The market created by the Pacific states is very considerable. . . . In my view, the situation in the Pacific depends on Soviet-American relations, which have not reached the required level.”

Gorbachev also called for new approaches to developing economic ties with foreign countries, adding that the Soviet Far East provinces had an “extremely low share” of Soviet exports in spite of their vast potential. 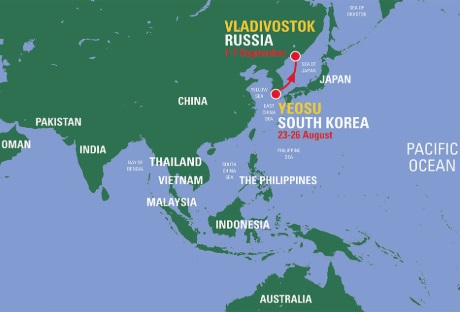 …In 1992, the United Nations Economic and Social Commission for Asia and the Pacific (ESCAP) endorsed the Asian Land Transport Infrastructure Development (ALTID) project comprising of the Asian Highway and the Trans-Asian Railway network as well as facilitation of land transport. The Asian Highway project is one of the cornerstones of ALTID. The formalization of the Asian Highway, through the Intergovernmental Agreement on Asian Highway Network adopted in November 2003, has brought the project to a new turning point in its history.  Signatories on the Agreement (notice the title is Transportation and Communications).

… The ESCAP secretariat was tasked with the complex task of coordinating the development of the Asian Highway network by facilitating discussion among member countries. With the financial assistance from the Government of Japan, it conducted a series of studies, the first of which was published in 1995. 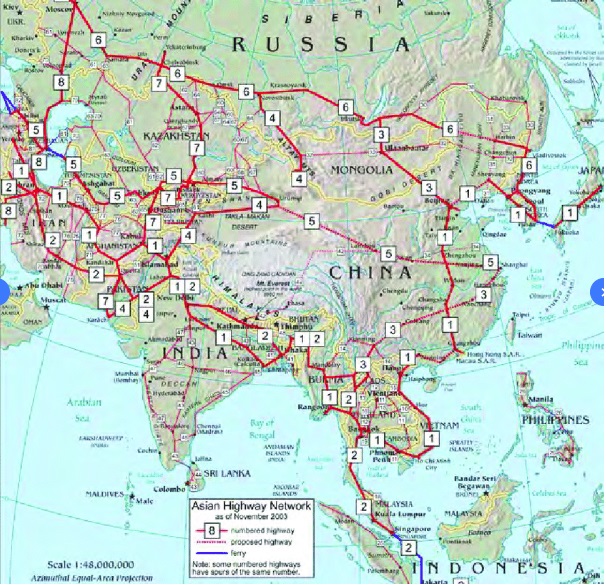 In 1988, Tsuyoshi Hasegawa of Hokkaido University wrote a research paper titled Gorbachev’s Asian Initiative and Asian Security.   [Note: I was unable to find a copy of Gorbachev’s Vladivostok speech online].  This paper documents the fact that Japan and the Soviet Union were working together and the focus was on a new non-military form of security for the region.  Excerpts:

coordinating with Japan its policy toward the Soviet Union in arms control, solution of regional conflicts, and expansion of economic and technical cooperation;  pg. ii 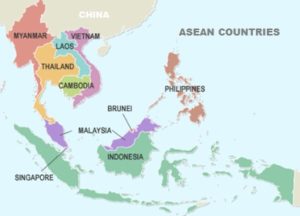 Gorbachev’s Vladivostok speech manifested his intention to make a clean break with this past policy. It signalled his intention to lower the importance of the military factor in Soviet policy and to expand Soviet influence in the economic and political areas in this region. [This region being the ASEAN countries shown in the map on the right.]

Since the Vladivostok speech there have been changes in personnel and organizations in the Soviet foreign policy mechanism, and active efforts to cultivate relations with Japan and ASEAN countries as well as to join international organizations such as the Pacific Economic Cooperation Council (PECC).

The original proposal for this project, entitled “Soviet Military Buildup in the Far East,” was designed to examine what role the Soviet military buildup in the Far East plays in overall Soviet military doctrine and what implications it has for security in Asia… The project’s findings indicate that fundamental changes are taking place in the basic characteristics of international relations in Asia, and that those assumptions which were applicable to situations in the late 1970s and early 1980s are no longer appropriate to cope with the new reality.

On the Heritage Foundation website, there is a paper from 1988 about Gorbachev’s Vladivostok initiative and the Soviet Union’s pivot toward Southeast Asia.  It gives a brief country by country analysis.  The title of the paper is:  After Vladivostok, Gorbachev’s Asian Inroads.

On the Defense Technical Information Center website, there is a paper from 1988 titled, Japan’s Role in Gorbachev’s Agenda.

The significance of Japan in the strategic moves by the Soviet Union go beyond Japan’s location in the Pacific and towards Japan’s involvement in robotics for transportation systems.  (Note:  I don’t have as much documentation on Japan as I do Germany’s involvement but Germany and Japan were the two leading countries in terms of road informatics and automation going into the 1990s.)

The Pacific Economic Cooperation Council (PECC) mentioned above in connection with Gorbachev’s Vladivostok speech is significant.  It reveals Gorbachev’s strategy and intention. The founding of the PECC was documented in an article titled The Grand Chessboard of the Trilateralists.

In a 1990 article in the Christian Science Monitor titled, Vladivostok and the Soviet Far East about the progress of the opening of the Vladivostok port city, the author wrote (hyperlink added):

In a 1986 speech here, Soviet President Mikhail Gorbachev promised a massive five-year development program for the Soviet Far East and promoted relations with Asian neighbors to help accomplish this.

A wide array of businessmen have already come to scout out prospects in the city, from the giant United States Bechtel Corporation and Japanese trading firms to a host of South Korean companies, the latest and most enthusiastic visitors.

The citizens of the region are looking instead to Boris Yeltsin, the president of the Russian Republic’s parliament, to heed their calls.  “Mr. Yeltsin is a bolder man,” says Kuznetsov.  “He is ready to open the city, maybe from Jan. 1 or March 1 next year. On Sept. 19, at its first session of the fall, the city council voted unanimously to give free access and residence to citizens of any country, appealing to the Russian parliament to ratify their decision. The parliament has already made the Maritime area a free enterprise zone, offering special terms for foreign companies.”

Mikhail Gorbachev’s next move in his shift of focus east towards the Pacific was to repair and restore relations with China. For decades, there were various disputes between the leaders of the Soviet Union and China so it was a big deal for Gorbachev to reach out.  Towards that goal, a Sino-Soviet Summit was scheduled between Deng Xiaoping and Mikhail Gorbachev for mid-May in 1989.  The Summit was the first official state visit between Chinese and Soviet leaders in 30 years.

According to the history on APEC’s website, Australian Prime Minister Robert Hawke proposed the idea for APEC in a speech in South Korea in January of 1989.

That’s what you call treason by definition.  They chose to call the territories from which they hailed economies rather than countries even though they list the names of countries.  That was a big clue that this organization was operating outside of the world’s established system of nation-states.   Political leaders represent countries and that includes the breadth of interests within a country.  Who represents economies?   Nobody.   The economy as a separate entity is an ungoverned space.   From what I’ve been able to discern, the U.S. Trade Representative (USTR) gives the patina of a government representative but in reality serves merely as a messenger boy (or girl) from the corporate syndicate (mafia) that is APEC.   And who does the corporate syndicate represent with respect to economies?   Themselves and nothing else.  The ungoverned space of the global economy has allowed corporate syndicates like APEC to wage undeclared war on nation-states and the people within those nation-states.