Chapter 5 – The Nut… Farmer from Georgia

The Department of Energy was created in the 1977 through reorganization of government led by President Jimmy Carter.  Jimmy Carter hired Gerald O. Barney to produce a report on international “sustainability” for the U.S. government.  The following is from a website about Gerald O. Barney:

Dr. Barney, a physicist, has specialized in the integrated issues of sustainable development.  He founded Our Task in 2006 to empower young people in the development of a mutually enhancing relationship between humans and Earth. Previously he founded Millennium Institute in 1983 and led it through two decades of work on sustainable development planning in developing and industrialized countries.  Earlier, he managed the preparation of the US Government’s international sustainability study, The Global 2000 Report to the President, for President Jimmy Carter. Global 2000 sold 1.5 million copies in nine languages.  Still earlier, he managed the National Program at the Rockefeller Brothers Fund, worked with Governors Nelson Rockefeller and Russell Peterson on the Commission on Critical Choices for Americans, was a staff member of the Council on Environmental Quality, Executive Office of the President, and prepared economic studies and large scale simulations at the Center for Naval Analyses.

Global 2000 Report to the President

Comments about the Global 2000 Report by Reviewers published with the report:

“It reads like something out of “The Empire Strikes Back.” The time: the year 2000.  The place: Earth, a desolate planet slowly dying of its own accumulating follies.  Half the forests are gone; sand dunes spread where fertile farm lands once lay. Nearly 2 million species of plants, birds, insects and animals have vanished. Yet man is propagating so fast that his cities have grown as large as his nations of a century before.”   ??Newsweek

“By now such grim warnings have become all too familiar.  But this particular forecast is different.  For the first time, the U.S. Government has added its full voice to the chorus of environmental Cassandras deeply distressed about the future.” ??Time

“Compiled by more than a dozen Federal agencies, Global 2000 is not a prediction but a projection—and a conservative one at that.  It presents so immediate a challenge to worldwide political stability and American economic security that even the most complacent new administration must recognize it as a priority issue for the President and Congress.” ??John B. Oakes, The New York Times

“[Global 2000] is first a warning to the world’s citizens and their leaders. It attempts to mark the boundaries of a new task for the human race, to preserve life on this planet.” ??Kansas City Star

Jimmy Carter made significant changes to the organization of government that I never fully appreciated until recently.    From the Center for American Progress website:

“The Department of Energy Organization Act of 1977 created the Department of Energy by bringing together the Atomic Energy Commission, the Federal Power Commission, and energy programs from the departments of agriculture and the interior. Two years later, Carter’s proposal to form a new Department of Education was enacted by Congress. Lawmakers also agreed to 10 smaller reorganization plans, covering civil rights enforcement, disaster assistance, and nuclear power regulation, among other areas. Carter also oversaw major civil service reform including the creation of the Senior Executive Service.”

The Senior Executive Service was created with the Civil Service Reform Act of 1978.  It doesn’t take a Harvard degree to figure out that if one intends to implement a radical agenda and ensure perpetuation after the administration is over, one needs to be able to place the “right people” in high positions in government.  The SES did that.

One interesting – and distressing factoid that I discovered recently.  The Human Genome Project was initiated by the Department of Energy.  I knew they worked with NIH to establish the infrastructure for the project (i.e. the Internet, databases, systems, etc.) but I didn’t know they initiated the project.  The idea that they initiated it makes me wonder what the parameters of the Human Genome Project were because with the benefit of hindsight it seems highly possible that by ‘human genome’ they weren’t just referring to DNA as the medical sense, but rather as code for human existence as a whole.  This is a very frightening thought given that it has been the DOE behind the deregulation of critical infrastructure enabling that critical infrastructure to be turned on us as a weapon of mass destruction. 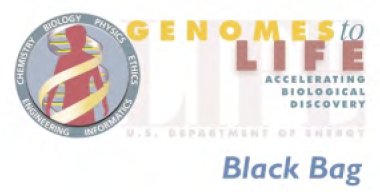 There is no more effective form of terrorism than biowarfare or the threat of biowarfare.

One of the speakers was John Harris of Changing Horizons.  He said he provided funding to Millennium for two reasons:

“to change the actions and policies of the United States which I believe are more and more destroying the world and because if we were destroyed or – really knocked down a lot, the rest of the world would have problems – major problems”.

According to Harris, the Global 2000 report was sponsored by Council for Environmental Quality (Executive Branch) and Ed Muskie, Secretary of State.  It was distributed to embassies all around the world.  John Harris gave Jay Forrester his first grant for urban dynamics plans.  He was impressed by the work and so he provided funding for Forrester’s project for the Club of Rome that led to the creation of the report, Limits to Growth.

“he human mind has not been given enough foresight, wisdom, analytical ability or I’m very much afraid, really caring about the future generation of humankind or God’s other creatures to SAVE US FROM IMPENDING DOOM unless we properly use the technical ability of computer models.”  John Harris, Changing Horizons Fund 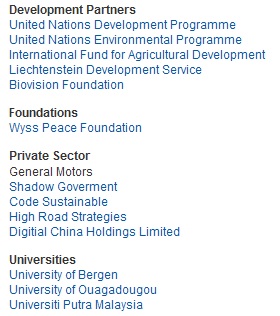 John Shilling, 2007 Chairman of the Board

“we are really facing an energy revolution”

John D. Shilling earned his Ph.D. in Economics from MIT, and A.B. in Philosophy and Economics from Stanford University. He taught at Boston College, advised the Moroccan Planning Ministry, and worked at the World Bank for nearly 30 years. His major work involved country modeling, sustainable development, macroeconomic policy analysis, environmental sustainability, capital flows, and financial markets, especially in Africa and Asia… He laid the basis for the World Development Report program and helped launch the WDR on Sustainable Development for 2002. He helped create a new Bank Environment Strategy in 2000 after evaluating the Bank’s environmental program…He led evaluations of the Infrastructure-Environment Nexus for the Bank and the Poverty Environment Nexus for UNDP.

T21 was developed from more than 20 years of extensive research and application carried out in consultation with the World Bank, UN agencies, developing country governments, and non?governmental organizations.

A copy of a T?21 powerpoint was found on the UN document management system website:

An Overview of the Threshold 21 (T?21) Framework 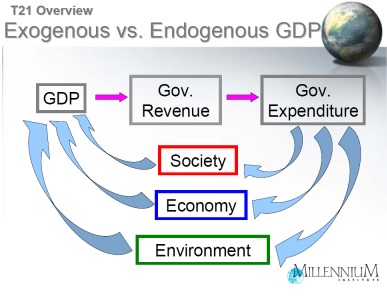 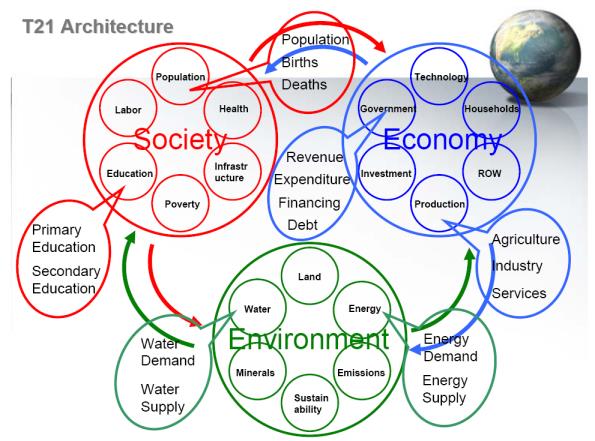 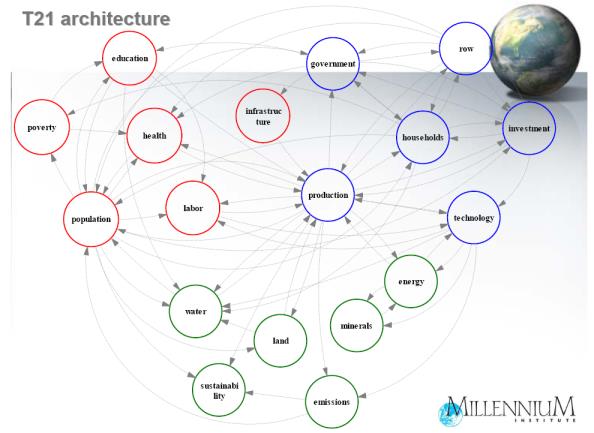 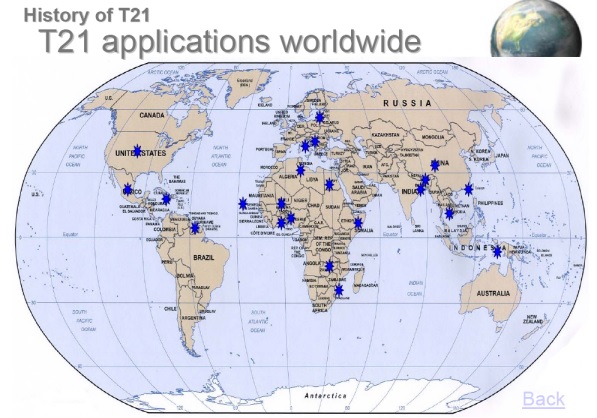