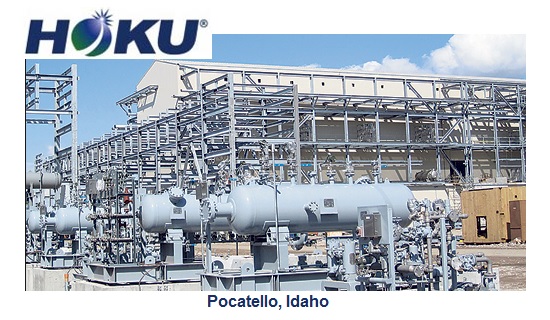 Hoku was a Hawaii-based manufacturing company that wanted to build a massive factory to take advantage of the growing polysilicon market, but they needed a place to do it.

Former Pocatello Mayor Roger Chase got the city to purchase land for $1 million and then they leased it to Hoku at a rate of 1 dollar per year for 99 years. Hoku came to Pocatello in 2007 and never opened its doors. This was obviously a horrible deal since we would have gotten only $99 back from our $1 million investment and it would have taken 99 years to do so. To this day I am still left wondering who in their right mind thought this was a good idea.

I interviewed current Pocatello Mayor Brian Blad some time ago on my television show which airs on public access Channel 12. Blad shared some important details with me about the Hoku situation that many in our community are not aware of.

Mayor Blad said, “Roger purchased that land to get them to come here. There was a lot of hope that would happen but it didn’t happen and it’s not going to happen. Since then there has been $700 million of infrastructure and building happen on that site. We have just over a billion dollars worth of liens on that property. They filed for bankruptcy and left all the local people holding the bag…. We have local contractors from Idaho that have $60 million or $70 million worth of liens they have been stiffed. Those companies have paid their bills to their employees and they paid for the stuff but they’re out of a lot of money. We have a local one right here in Pocatello that’s out just over $13 million. He probably won’t survive because of that.”

The plant was auctioned off after Hoku had declared bankruptcy. JH Kelly was the high bidder. A federal trustee for the Hoku bankruptcy recommended that a federal court accept the bid. The federal court ruled against the bid. After the bankruptcy judge ruled against the first auction, they went ahead with a second auction in which JH Kelly was once again the high bidder and got the plant.

Pocatello is left still feeling the sting of this bad investment. The city will never get those tax dollars back and the taxpayers are still left footing the bill.

Blad said, “The thing about Hoku is there were many people who told Roger (Chase) don’t put that there. I know our former fire chief said you don’t put that there because it’s got toxic chemicals, it’s got waste in it that when there is a fire, not if, but when there’s a fire the prevailing wind blows those chemicals straight over the city. So it was a dangerous thing to do, it was ill-advised, it shouldn’t have happened and it’s cost us a lot of money. ”

Blad continued, “Even right now we’re paying, heavens we’re paying part of the Idaho Power rate increase. They named Hoku as one of the number one reasons everybody in Pocatello got their power bill increased. That’s part of that 25 percent power-rate increase that we have. They named Hoku as being the reason because Hoku guaranteed them $2 million worth of power being used every month. So it’s a $24 million revenue source that they anticipated and figured they would have but that turned around and left. Everyone is paying for it right now.”

The bankruptcy at Hoku is apparently having a negative impact on everyone’s wallet since it has caused everyone’s power bill to go up.

The entire situation with Hoku reminds me of Solyndra. I still remember when President Barack Obama spent billions of tax dollars on Solyndra, and then Solyndra went bankrupt and closed its doors. Solyndra was an enormous waste of taxpayer dollars. Hoku is former Mayor Roger Chase’s Solyndra, and by extension it is the Bannock County Democratic Party’s Solyndra.

The citizens of Pocatello have faced a lot of economic hardships as a direct result of Hoku’s bankruptcy, but I hope that is mostly behind us. Hopefully the future will be brighter for the city of Pocatello. But we as citizens must never forget what happened at Hoku. There are too many important lessons to be learned here. The mess caused by Hoku’s collapse was so devastating that even the New York Times reported on it.