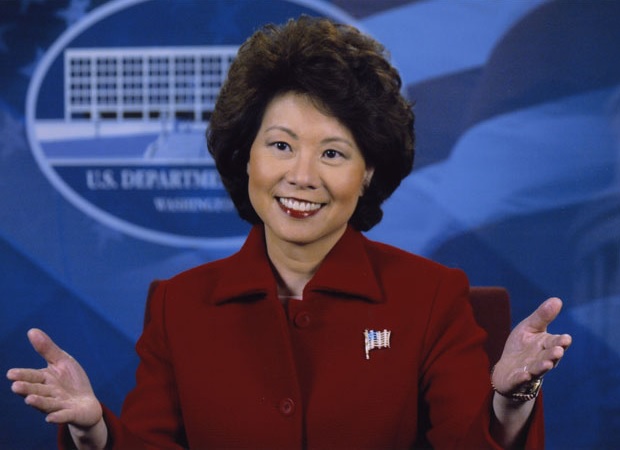 Chairman Chao for Transportation Secretary? Say it ain’t so….

In a November 29th article, the New York Times reported that Elaine Chao, Mitch McConnell’s beard was appointed by Donald Trump to be the Secretary of Transportation.  There couldn’t be a worse appointment for anything in any Administration let alone the Trump Administration than the hissing snake, Chairman Chao.

Chairman Chao first came on my radar screen when she was the Secretary of Labor for the GW Bush Administration.  Treasury Secretary John Snow, Secretary of Commerce Don Evans and Secretary of Labor Elaine Chao took a propaganda bus tour in Wisconsin.  I wrote about it in a piece I called  Three Stooges Bus Tour.   At the time, the economy was tanking.  Online websites of local newspapers were reporting devastating mass layoffs, foreclosures, bankruptcies while the mainstream media was reporting that the economy was booming.  They were using housing starts as proof that the economy was perking right along.  The layoffs were so bad that the Bush Administration stopped producing a report on mass layoffs that was a standard for report for economists who watch government statistics.  The lies about the economy coming from the Bush Administration were so bad, I did my own little statistical research project to prove it.

I went to the Social Security Administration website to look for statistics on actual social security contributions from employers.  The reason is because the social security contributions are fixed amounts per employed person with a cap on income for top earners and the laws regarding when those payments must be made are very strict – every quarter those taxes must be paid.  What my project revealed was that the Social Security Administration was using a model rather than reporting the true numbers.  Models are pretty handy for fraud because you can make them report whatever you want to see as output.

For several years, the quarterly job loss statistics were between 400,000 to 500,000 per quarter.    In 2004 when the Bush Administration could no longer lie with a straight face about the condition of the economy, Treasury Secretary John Snow appeared at a National Press Club event to speak about it.  He said that seven trillion dollars had been taken out of our economy.  You can listen to him say it because I wrote about it at the time.

In October of 2004, there was a House Budget Committee hearing during which John Spratt (D-SC) said, “as of the end of the fiscal year 2003 revenues were at their lowest point since 1950“.  The revenues were only 16.2% of the GDP.

It was obvious to this Systems Analyst/Programmer that the computer systems of our government had been sabotaged – intentionally or unintentionally through sheer incompetence so I wrote this…   Administrative Coup d’etat – The World’s Greatest Heist and Betrayal.

Some time in 2004 in the middle of the mass exodus of manufacturing businesses from the United States with Americans losing not only their jobs, but everything they worked for in their lifetime, George Bush announced his “Guest Worker Program”  –  importing foreign workers on visas to take whatever jobs remained in America.  Talk about cognitive dissonance – my head was spinning around on my neck.  I went heads down, full speed trying to figure out what the hell was going on in this country.

House of Representatives member Tom Tancredo (R-CO) introduced a bill, H.R. 3333 to fulfill George Bush’s announced Guest Worker program.   The deal was that our borders would be protected in exchange for a COMMUNIST system of labor management for “workers”.    Elaine Chao was the Secretary of Labor when this bill was proposed and she was ok with that which is why I call her Chairman Chao.

(a) In General- The Secretary of Labor shall take any steps necessary to ensure that all State employment agencies and all employers in the United States are able to acquire secure, password-protected access to the Internet-based job database provided jointly by the Department of Labor and State employment security agencies and known as `America’s Job Bank’ in order to permit the posting of job openings throughout the United States

There are a lot of components to the COMMUNIST labor management system that include “reforms” to our system of education.  Because of that, I prepared the diagram below so that you can view it as the system it was designed to be.  The significance of the WIRED initiative becomes even more significant in view of the high tech highways and international corridor initiative of the Department of Transportation which is why Elaine Chao – Chairman Chao should not be named to any position in the U.S. government EVER.  The transportation issues will be addressed in part 2 of this article.

In 2006, as the Secretary of Labor, Elaine Chao announced the WIRED initiative.

On February 1, 2006, former U.S. Department of Labor Secretary Elaine L. Chao announced the WIRED Initiative, encompassing these ideals to better align workforce and economic development. WIRED takes a critical step in providing individuals with the tools for success, businesses the human capital required for growth, and the American economy the fuel for continued strength.

Globalization has changed the formula for developing a prepared workforce and necessitated a change in visualizing the boundaries of an economy. An economy is no longer defined by the political boundaries of a city, county or state line. Instead, economies are defined regionally by a diverse group of industries, supported by factors such as infrastructure, investment and an availability of local talent. This regional concept promotes partnerships among key community players, including K-12 schools, community colleges, adult education centers, universities, regional employers and community economic and workforce development organizations. 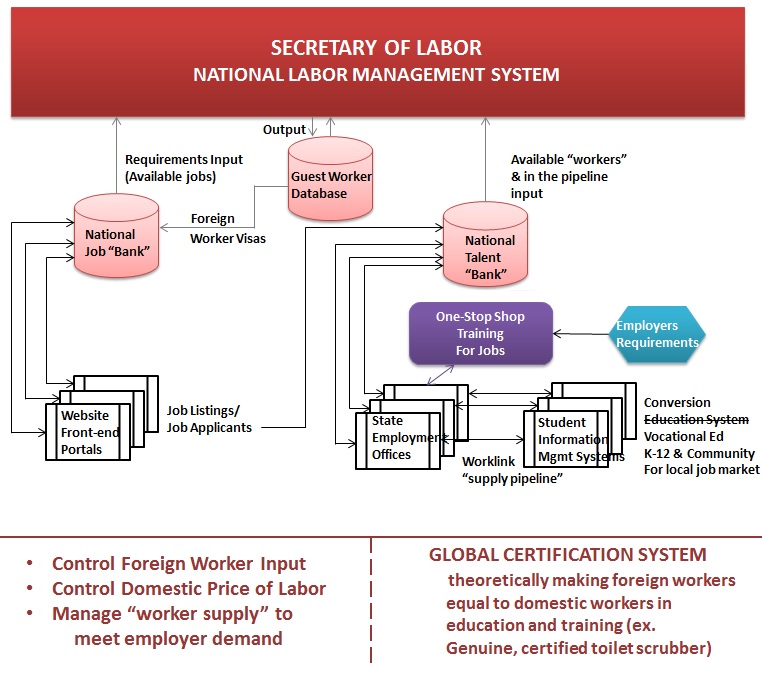 In 2005, the Shell Corporation (Royal Dutch Shell) sponsored an essay contest.  The topic was Export Jobs or Import Workers?   I entered that contest and didn’t win obviously because they were looking for an essay to support the economic suicide of our country.

I’m not finished with Chairman Chao yet.  Next up – her involvement in our transportation system and the border systems designed to allow corporations to outsource their overhead to our government.