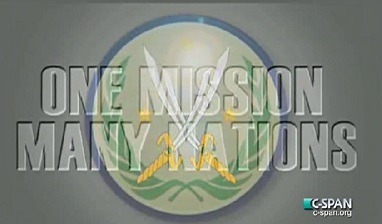 This morning on C-Span’s front page, there was a video story – Defense Department Briefing on Military Operations Against ISIS so I clicked on it.  A picture really is worth a thousand words.  The Briefing was given by Colonel Steven Warren.  He had video – and when he went to the video, preceding the story, was this logo: 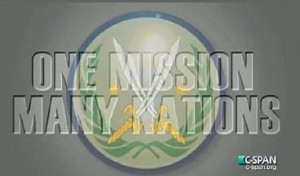 The way the Colonel gave the report, it was like a progress report from the Joint Coalition School for Killing, Maiming and Destroying.  And the insignia tells us under whose flag they are flying.  It’s not an American flag regardless of what the Colonel’s uniform says.

The video showed the bombing of a bridge to stop a VBIED.  I found a video of a VBIED on youtube.  A VBIED is a truck bomb.

What I see in that video is a country in a primitive state that has expensive high-tech cameras focused on the roadway and a more technologically advanced country blowing up their vehicles demonstrating technological superiority and moral depravity.