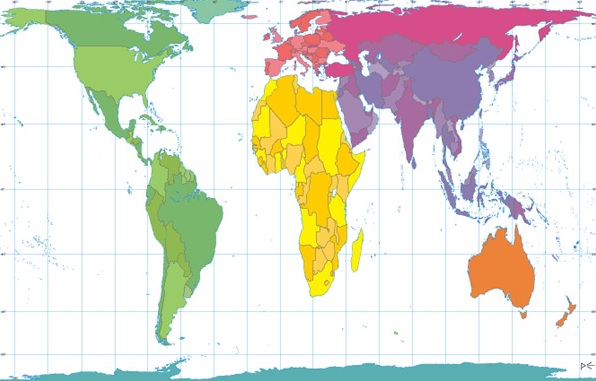 World in the Abstract: Population Normalization

In 2004, Thomas P.M. Barnett gave a presentation at the Industrial War College titled, Military in the 21st Century that was broadcast on C-Span.  The audience naturally was military and Pentagon people.   He was there to talk about the concepts in a book he wrote titled The Pentagon’s New Map.  In the book, he divided the world into the Old Core, the New Core and the GAP.  In his view of the world, the Old Core was the United States and other western nations – the G7 countries.  The New Core was the so-called emerging countries – India, Brazil, China and the GAP was the least developed countries like the Middle East and most of Africa.

What struck this writer and completely captured my attention was the scope and scale of the ‘grand strategy’ he was presenting.   It was a bizarre combination of strategic planning for Wall Street and the military that spelled the destruction of the United States as I knew it.   The cognitive dissonance was so great I spent the next three months transcribing his presentation – every word of it.  I had no words to write about it because it was too big so I did this webpage:  Shattered Worlds  instead.   Notice at the bottom there are four concepts three of which were directly from Barnett.  The last one was implicit in what he was saying.

What Barnett gave in his presentation was strategic thinking for the ostensible purpose of securing an American future that destroys America in the process.  Kill it to save it.  If it was intentional, then he was a traitor.  If not, then he went off the deep end and was completely insane.  No other options were possible.  Since he was a defense analyst who was hired immediately after 9-11 for the Office of Force Transformation, he was feeding back the input he got from other powerful sources and those powerful sources arranged for him to speak to military people so he had to be taken seriously.

In the presentation, Barnett introduced a term that was new to me at least: War in the Context of Everything Else.  That was a horrifying thought – stealth warfare on an unsuspecting civilian population and the population being targeted was the United States.

Barnett’s presentation provided me with the trailhead for much of my research and guideposts ever since.  Recently as more and more details of this so-called refugee crisis have come to light, Barnett’s words still ring in my ears….   Is it the west versus the rest or is it the best versus the rest?  That’s a more inclusive redefinition of Hitler’s master race concept.   Another critical message from Barnett was that, there are four flows that are crucial to globalization.  Resources in regions where they are plentiful must migrate to where they are scarce.  The four flows are people, energy, money – foreign direct investment, equity ownership and the export of security.

I took a clip from Barnett’s presentation so that you could hear him explain the flows of people – from the GAP to the Old Core.  He included the New Core – but not so much.   When you hear it from him, you should understand that this so-called refugee crisis is not a refugee crisis.  They are playing you for a sucker.   It’s actually a strategic plan to redistribute populations from the least developed countries to the developed countries.  Since the least developed countries are also the countries that are primarily Muslim countries that have been living in a world not much more progressive than the 7th century, it has to be considered a strategic plan for the occupation and take down of the United States.   That’s why these so-called “refugees” are military-aged young men.

The following clip is also from the Barnett presentation.  In this one he talks about a consolidated global military/police force with a four-star general at the top.

Barnett’s presentation is long – about 2 hours and 40 minutes but it is THE program to watch if you want to understand what is happening to our country.

The Military in the 21st Century