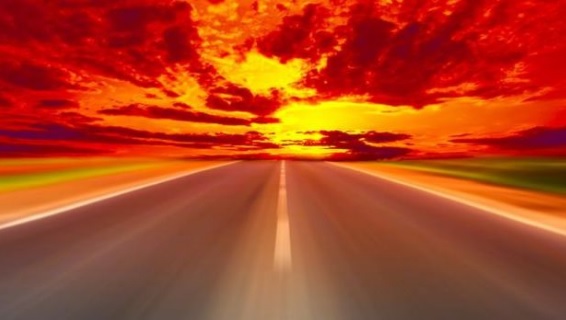 The saying is that the road to hell is paved with good intentions but sometimes, the road to hell is paved with bad intentions and this may very well be one of those instances.   Today, I was given cause to look at the case file of Pete Santilli on Pacer, the government’s document repository for the U.S. District Courts.  Santilli’s case number on Pacer is 3:16-MJ-00024.

What I was looking for was any and all statements filed by anybody in the case record.  There are none.   What I did find was Document 3, Government’s Memorandum in Support of its Motion for Pretrial Detention.   It wasn’t relevant to what I was looking for but since I was there…   when I got to the following sentence, I had a major ‘ah ha’ moment.

Santilli’s co-defendant, Cliven Bundy (“Bundy”) 69, is a long-time resident of Bunkerville, Nevada, living on 160 acres of land in a very rural and sparsely populated area of the state. Bundy Ranch, as he refers to the property, is located near the Virgin River a few miles from where Interstate 15 crosses from Nevada into Arizona, approximately 90 miles northeast of Las Vegas, Nevada. Bundy Ranch is surrounded by hundreds of thousands of acres of federal public lands commonly referred to as the Gold Butte area or the Bunkerville Allotment. Bundy uses that entire range of land to graze his cattle unlawfully.

The “ah ha” is that the Bundy grazing allotment is a perfect location for an Intermodal Commerce Zone on the CANAMEX high priority corridor.  It has the on-off ramps and it’s just outside the nearest town which is St. George, Utah.  Being 90 miles from Las Vegas makes it a good location for a “pit stop” for truckers but more importantly, a microwave communications hub for the corridor technology (Intelligent Vehicle Highway System – IVHS).

This map has the route of the CANAMEX corridor with a black arrow point at the approximate location of the Bundy Ranch. 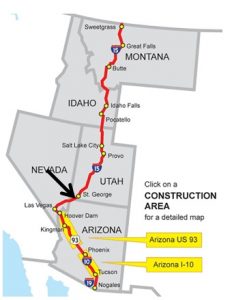 The planning for the international, technology-laden corridor system began following the completion of a 1986 Dallas-Fort Worth Regional Transportation Study.   The name of the project was Mobility 2000.

“Founded in 1988, Mobility 2000 was an informal assembly of industry, university, and government representatives created to promote the use of advanced technologies to improve highway safety and efficiency. The initiative was formalized in 1991, when the Intermodal Surface Transportation Efficiency Act (ISTEA) was enacted, and the national Intelligent Vehicle Highway System (IVHS) program was established. A growing sense soon developed in the IVHS community, especially in the public transit arena, that “intelligent vehicle highway systems” did not embrace all the transportation modes addressed in the national IVHS program. In 1994, the national IVHS program was renamed the Intelligent Transportation System (ITS), to clarify the multi-modal intent.”   Source: 11) I-70 Rural IVHS Corridor Master Plan, Colorado Dept of Transportation, De Leuw, Cather & Company, April 1996, 660205-01450  Appendix C–ITS Acronyms

The National Highway System Designation Act of 1995 (PL 104-59) designated the I-15 as a “high priority corridor” that is named the CANAMEX Corridor as follows:

(26) The CANAMEX Corridor from Nogales, Arizona,
through Las Vegas, Nevada, to Salt Lake City,
Utah, to Idaho Falls, Idaho, to Montana, to the
Canadian Border as follows…:

What the U.S. Department of Transportation did with this plan for an international corridor system was to put a target on Cliven Bundy’s back.   And to make matters worse for Mr. Bundy, the BLM was given a dual mission of not only managing federal lands for multiple use, they were also the lead agency for Microwave Communications across public lands which was a requirement for the Intelligent Vehicle Highway System (IVHS) which is an integral part of the international corridor system.

The following is an extract from a 2004 memorandum from the Oregon Office of the BLM concerning siting of federally administered lands with a high potential for development.

Purpose: To assist the districts in identifying communication sites on Bureau of Land Management (BLM) administered lands with a high potential for development and to identify those sites in need of a communication site management plan or an update to an existing plan. Each site will require a cadastral survey of the site and the development of a map to identify the location of all facilities on the site, potential future development areas, the legal access, etc.

The BLM has no mandate or mission to protect ranchers property rights including the right to graze on federal lands.  It’s possible – and highly likely with hindsight that they could have given priority to the Bundy grazing land as a development site for the international corridor system over cattle grazing under the same theory that was used to take private property in the Kelo v. The City of New London. Higher and better use I believe was the argument.    The reason I didn’t specifically say CANAMEX in that statement is because it would be true for anybody who was living on property that could potentially be designated as having a “high potential for development” as happened with the FLDS community in Texas in 2008 and may have been the real reason behind what happened to David Koresh and his followers at their Waco Compound which was near an airport.

As if all of that were not bad enough, Mayors and City Councilmen and probably County Officials were made aware of the plans for the Corridor system.    The North American International Trade Corridor Partnership was formed as a private partnership of public officials.  Shortly after they were discovered, they merged into a private non-profit named NASCO – North American SuperCorridor Coalition but not before some of the website was captured.   The point being that anybody who was aware of the plans for the international corridor system, had what is essentially insider information that was very valuable providing a plausible motive for silent complicity with corruption to relieve property owners of their property.

There needs to be an end-to-end investigation of the corridor system for all routes to see how many private property owners were driven off their property and more importantly at this point, to put an end to the abuse of property owners who have the misfortune to be owners of property that has a substantially increased value for purposes of which the general public is not aware.