It was discovered in previous research that George Bush and Mikhail Gorbachev signed a bilateral accord in 1990:

[Note:  Look around you.  Everything you see has chemicals in it, on it, around it.  What’s a weapon?  What is a household use?  What is a legitimate commercial use?]

It was also discovered that the Pollution Prevention Act of 1990 (H.R. 5931)  was introduced by Howard Wolpe but that it never went through the committee process and Congress never voted on it as legislation.  Leon Panetta slipped it into an appropriations bill, The Omnibus Budget Reconciliation Act of 1990 which became PL 101-508 on November 5, 1990.

The EPA accepted it as law presumably – with the benefit of hindsight because of the bilateral agreement signed with the Soviets.

On May 23, 1990, Dow Chemical Company signed an agreement with four environmental groups.  Strom Thurmond placed a notice of this agreement in the Congressional Record.

Mr. THURMOND. Mr. President, on May 23, 1990, the Dow Chemical Co. announced a new 4-year partnership for wetlands conservation with Ducks Unlimited, Inc., the Nature Conservancy, and the National Fish and Wildlife Foundation to preserve and protect North America’s endangered wetlands.

During a press conference, which was held in my Capitol office, Dow presented the first installment of a $3 million contribution for wetlands protection and restoration. This donation represents the largest corporate financial donation ever to benefit the North American Waterfowl Management Plan [NAWMP] and demonstrates Dow’s dedication to environmental conservation and protection.

In 1990, Madeleine Kunin was the Governor of Vermont.  She spent some time in Eastern Europe supposedly to monitor elections – but also to investigate environmental and health issues.  In 1991, Douglas Costle, Jonathan Lash, Governor Kunin and her policy advisor George Hamilton created a new organization – the Institute for Sustainable Communities. 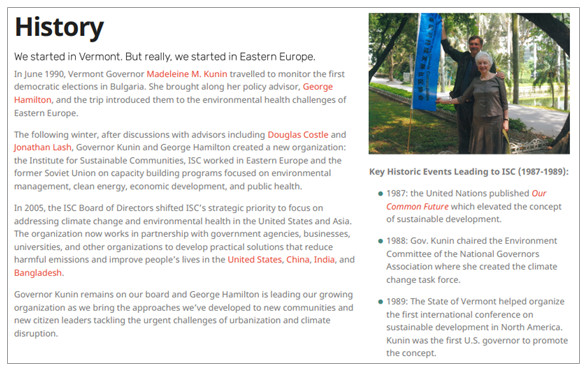 Notice that Kunin chaired the Environment Committee of the National Governors Association and that she created the climate change task force.  She was the first governor to promote the concept of sustainable development.  Bill Clinton appointed her to be the Deputy Secretary of Education in 1993 and Clinton appointed her to the President’s Council on Sustainable Development.

Here is a LINK to the organization of the President’s Council on Sustainable Development (PCSD).  Look for the names that correspond to the above information.  It seems highly likely that the PCSD was constituted to implement the chemical weapons agreement signed with the Soviets in 1990 – especially since Dave Buzzelli of Dow Chemical was selected to be the Chairman.