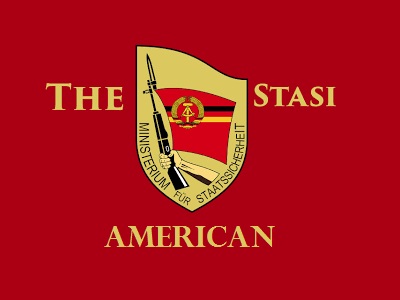 I read the Foreign Intelligence Surveillance Court MEMORANDUM AND ORDER dated April 26, 2017.   It is posted on the Infowars website in an article written by Kit Daniels.  It can downloaded from Scribd.  I only read it because of the public mention of a secret society in the Justice Department.  I didn’t see any reference to a secret society in the memorandum but it’s not difficult to see how a network would be formed to use the information.  The participants in the network wouldn’t be called a secret society however.  They would be called co-conspirators in a criminal enterprise.

The MEMORANDUM is a system audit with an order from the court at the end that says basically, except for a few noted problems to be corrected, everything is hunky dory.  As I read it, this system of data collection and dissemination is about as un-American as it gets.

It’s now official.  The United States has an American STASI – Ministry for State Security.   It isn’t just one agency though, it’s the NSA, CIA, Military Intelligence, FBI and probably other Department of Justice law enforcement agencies.  The STASI also includes employees and contractors – including foreign contractors which is an interesting twist.  The American STASI has put the lives of the American people under a microscope while they themselves operate behind a wall of secrecy.

All of the procedures and requirements are administrative smoke and mirrors.  There is not one requirement that I read that I couldn’t get around if I were on the inside in position to make a request.

One test for this entire surveillance system being a STASI system is, “Do they have a network of people on the outside to set up scenarios”?   Yes they do.  The FBI has their INFRAGARD network.   It’s not difficult to imagine who might join INFRAGARD.  The local newspapers and businessmen, groups like the Southern Poverty Law Center, anybody that could benefit from a “close relationship” to law enforcement especially when tangential benefits can be derived outside the scope of law enforcement and shared among the insiders.

Also, if you know anybody who is off the internet because they don’t want to be known by authorities.  Tell them to forget about it because you can’t do anything in this country with leaving an electronic footprint including driving, owning a piece of property, car registration, the list goes on.  All of that information is available to the American STASI and if you have something they want, they’ll be able to get it.

The justification for the vacuum cleaner approach to data collection is allegedly terrorism.   It works out really, really well for the American STASI to have open borders, massive numbers of foreign workers and students and to allow massive numbers of “refugees” from the third world where terrorism has been normalized.  Any contact you may have with a potential foreign terrorist could cause deliberate or “incidental” collection of information on you.

In Chapter 2 of an Inspector General’s report on the FBI’s handling of intelligence information prior to September 11, 2001 attacks,  where the above paragraph was found, it reveals an evolutionary process of blurring the lines between foreign and domestic – intelligence and criminal investigation.  The evolutionary process is a tell tale sign of system development.   They’ve been working on building the STASI system for a long time.  Clearly, it’s time to clean house – not just in the law enforcement agencies but also in Congress itself because it was Congress that authorized the building of this un-American system of secret police, secret surveillance, secret information collection and dissemination that led inevitably to corruption behind the walls of secrecy.