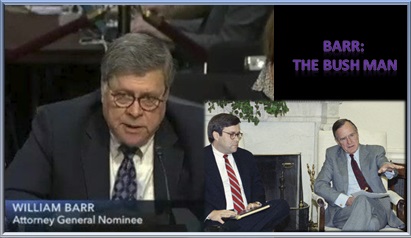 William Barr for Attorney General to replace Jeff Sessions is an interesting choice.  His first appointment to the Justice Department was during the administration of George H.W. Bush – Bush 41.   The following is the timeline for his government service:

He worked in the Legislative Affairs Office for the CIA.

He was appointed Deputy Attorney General

Within the walls of power, William Barr’s rise is stunningly fast.  In his nomination hearings for the position of Attorney General, at least four senators remarked about his rise – giving the “poor boy makes good” theme plus a hero story in their opening remarks.  Of course, for anybody in New York, the name Pelham (William Pelham Barr) is well known even if William wasn’t.  For his parents to retain the name it means they were retaining the connection to the family history (hint:  William Barr’s hobby is playing the bagpipes).

The hero story is about the  Alabama’s Talladega Prison riot and hostage crisis.  It’s noteworthy that the prison rioters were Cubans who had arrived in the U.S. during the Mariel Boatlift.

Obviously, the reference to the Talladega Prison situation was scripted to give him a hero story. Deputy Attorney General Barr’s only part in it was that he gave the go ahead to the FBI to carry out the raid.  If anybody was a hero in the event, it would be the FBI swat leader and the swat team that planned and executed the pre-dawn raid on the prison.

In the nomination hearing for Barr, what the Republicans were doing was trying to give the impression that William Barr’s stunning rise to power in the Justice Department was simply on merit.  That’s not true.  He didn’t rise on merit.  He rose on connections which is not to say that he didn’t have merit but connections override merit and William Barr was very connected to George Bush as Bush revealed at Barr’s swearing-in ceremony.  He had known Barr since 1976 when Barr worked for the CIA in legislative affairs (the sausage factory where international policy and obligations are magically transformed into domestic legislation and is handed off to Congress).  In President Bush’s remarks preceding the swearing in – which were more like a Friar’s roast of a friend than a solemn ceremony, Bush revealed his relationship with Barr.

Later in the hearing, Senator Ted Kennedy questioned William Barr about another decision he made.

The Wichita case involving Operation Rescue blocking the entrance to an abortion clinic with a protest seems to me to be a Marxist dialectic – a staged event to give cause for a federal case in front of an activist judge to expand federal jurisdiction into state and local matters. William Barr played along because even though he didn’t call himself one, he was a civil rights lawyer and that’s what civil rights lawyers do – they stage dialectics to increase federal power. Barr’s decision to let the out of control federal judge’s decision stand was complicity on Barr’s part in the game scenario. That judge should have been removed from the bench for his actions in this case.

As a side note, main stream media conditioning of the public to think of foreign policy (war) when the subject of expansion of executive power comes up is a misdirection.  The far more dangerous expansion of executive power is the exercise of power over our state and local governments.  After the Idaho experience of fighting federal overreach into our state with the mandate to include a Hague Convention in state law along with the discovery that our state is being run by lawyers – no doubt funded by the Feds, plus all the federal overreach in our state related to natural resources and land use, it’s not difficult to see the danger of expansion of powers in the executive branch because that power is manifested in the administrative agencies of the federal government.

The clue that the Wichita case was a dialectic is because of George Bush’s crime package.  They needed federal intervention in state and local affairs to implement the community aspects of the crime legislation.  To do that, they needed to expand federal jurisdiction within the states and the Witchita case gave it to them.   It was the beginning of the federalization of law enforcement combined with social services in what is really a communist model of management.  At Dick Thornburgh’s resignation event, he referred to the programs as “weed and seed”.

Of course, this story wouldn’t be complete without the mention of the Weaver Family at Ruby Ridge. Put into the context of the times and the ambitious goals of expansion of reach for the Department of Justice, it’s not difficult to see the Weaver’s as sacrifices on the altar of those ambitions.  William Barr who was the Attorney General when it happened, went all out in the defense for the murderer with a badge, FBI sniper Lon Horiuchi.

The death of Vicki, their son and his dog were cold-blooded killings and only a dirty cop would defend the monster who did it. A dirty cop with a law degree is one of Satan’s soldiers and that’s William Barr.   But that’s probably not fair.  Why don’t we just say all lawyers that are part of the international and national syndicate who are using the law in a criminal takeover of the governments of the world are Satan’s soldiers and William Barr is one of those lawyers.  Shakespeare had it right.

The following are links to the full videos from which the clips above were extracted:

Day 1 of the Nomination hearing for William Barr, November 12, 1991