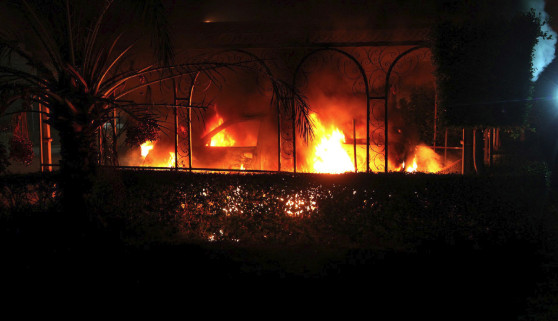 The Road to Benghazi – Part 1

The road to Benghazi actually begins in Amman Jordan. In 1995, Secretary of State Warren Christopher gave an Address…  Read More »

The Road to Benghazi – Part 2

Libya: The Clowns Come to Town When George Bush announced the plan for a Middle East Free Trade Area (MEFTA), he… Read More »

The Road to Benghazi – Part 3

Khatallah was captured in Libya on June 15, 2014, and brought to the United States to face trial in the U.S. District Court for the District of Columbia. The jury found him guilty of one count of conspiracy to provide material support or resources to terrorists, one count of providing material support or resources to terrorists, one count of maliciously destroying and injuring dwellings and property, and placing lives in jeopardy within the special maritime and territorial jurisdiction of the United States, and one count of using and carrying a semiautomatic weapon during a crime of violence. He was acquitted of the remaining counts against him… According to the government’s evidence, Khatallah was a leader of an extremist militia named Ubaydah bin Jarrah, which operated outside the law, and in the months prior to the attacks, he sought to incite violence by his and other militia groups against the presence of the United States in Libya.