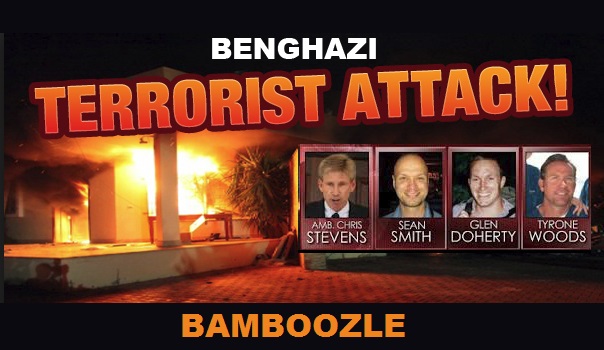 The latest news on Hillary Clinton is that she is in a New York City hospital while she is being treated for a blood clot that occurred as a result of a concussion she allegedly suffered when she fainted due to flu. This was a convenient faint because the timing prevented her from having to testify about State Department activities and security for personnel in Benghazi, Libya.

After the incident in which four Americans were murdered, U.S. Ambassador to the United Nations, Susan Rice was all over television with talking points about some anti-Muslim video that was the cause of a mob forming who then broke into the U.S. Consulate in Benghazi and murdered the Americans. Rice’s story was clearly a disinformation cover story. She claimed that it came from the Intelligence Community.

We now know that the facility in Benghazi was not an embassy. It was an “off books” facility and because of that, it did not have the security afforded to official State Department diplomatic locations. The Left jumped on the story saying that the compound was being used to provide guns to Al Qaeda – the very people who allegedly attacked us on 9-11 2001. But, if Chris Stevens was actually in Benghazi to hand out guns to terrorists, would he take a computer geek with him?

Besides the Seals who were murdered, the other person with Chris Stevens on 9-11 2012, was Sean Smith, U.S. State Department Information Management Officer. It doesn’t take much brain power to figure out that when you are going on a mission to distribute guns, you don’t take a computer geek. Would you take Bill Gates on a mission like that? How about Steve Jobs? Nope… wouldn’t happen.

What is more likely is that Chris Stevens was working on the PEPFAR program and if he was delivering anything, he was delivering telecommunications and computer equipment. On September 12, Stevens had an appointment at the Benghazi Medical Center with Dr. Thomas Burke of the Massachusetts General Hospital.

NPR did a radio interview and wrote an article about Dr. Burke and his purpose for being in Benghazi when the attack occurred:

Doctor Thomas Burke of Massachusetts General Hospital was in a hotel room in Benghazi, Libya last Tuesday night, planning a meeting with Christopher Stevens, the U.S. ambassador to Libya who died in an attack on the U.S. consulate that night.

The two had planned to discuss a 10-year effort to establish Benghazi’s first modern emergency care department and pre-hospital care system. But when Burke spoke on the phone with an attache at the U.S. consulate, the attache yelled “Oh My God” and hung up, and Burke, who was a mile from the consulate, felt a huge blast that turned out to be the attack on the American consulate that fatally injured Stevens.

Later that night ambassador Stevens was brought to the Benghazi Medical Center and pronounced dead. It was the very place where Stevens and Dr. Burke were scheduled to meet to discuss their plans for Libya’s health care system.

Here is a 2004 USAID report on the status of Libya’s health care system at the time sanctions were lifted:

Interview with Dr. Thomas Burke regarding Chris Stevens and Massachusetts General Hospital meeting in Benghazi   (video is no longer available – but the article is in the archive)

I am proud to lead the Massachusetts General Hospital Division of Global Health and Human Rights, housed in the Department of Emergency Medicine. Thomas F. Burke, MD, FACEP, FRSM Chief

In 2003, George W. Bush signed legislation for HIV/AIDS relief in Africa. I was aware of it but didn’t pay too much attention because for my entire life, the U.S. has provided money for aid programs in other countries – food relief, emergency assistance, medical and military equipment, etc. Aside from outsourcing and the anomalous 9-11 event in New York City, I was still in the delusion bubble that the United States had a relatively decent government that worked for the American people so there was no reason to look further into relief provided to Africa. Of course all of that has changed now and it’s clear that the U.S. government (if there is one), is simply a multinational criminal operation masquerading as a government.

The program that George W. Bush authorized was PEPFAR – President’s Emergency Plan for AIDS Relief. It appears to have been passed in the 108th Congress, H.R. 1298 with the title, United States Leadership Against HIV/AIDS, Tuberculosis, and Malaria Act of 2003. It became Public Law No. 108-25

If you look at the media coverage about this legislation, it was supposedly a humanitarian endeavor – providing medications for people with AIDS. That wasn’t true. That was the cover story. The PEPFAR program is about a computer system – a global computer system: Global Health – medical care via telecommunications, logistics for the delivery of vaccines (containing God only knows what deadly pathogens), etc.

That legislation authorized creation of a position within the State Department for a “Global HIV/AIDS Coordinator” to report directly to the U.S. Secretary of State.

At this time, the person holding that position is Dr. Eric Goosby, U.S. Global AIDS Coordinator

He also previously served as Professor of Clinical Medicine at the University of California, San Francisco. Ambassador Goosby has played a key role in the development and implementation of HIV/AIDS national treatment scale-up plans in South Africa, Rwanda, China, and Ukraine.

What prompted me to look at all of this was that about a week ago, I found a link to a video that I obviously saved to watch at a later time, but forgot about. The program was a panel discussion on Global Health and national security sponsored by CSIS.  They had just released a report titled, Global Health as a Bridge to Security.

Now take a look at the CDC Global Health Project and

CDC manages approximately $2.1 billion in financial and resource investments for global health. In addition to Congressional Appropriations, CDC receives approximately $12 million in global funding through foundations and other donors including the Bloomberg Family Foundation, the Bill and Melinda Gates Foundation, and the CDC Foundation.

(Don’t look at the amounts of money because there are many money funnels set up under different budgets for “global health” both as a medical research project, a telecommunications-infrastructure project, and more.)

President Obama’s $63 billion Global Health Initiative (GHI), launched in May 2009, partners with countries to improve health outcomes through strengthened health systems, increased and integrated investments in maternal and child health, family planning, nutrition and infectious diseases including HIV/AIDS, tuberculosis, malaria and neglected tropical diseases, and through a particular focus on improving the health of women, newborns and children. While the GHI will be implemented in all countries receiving U.S. health assistance, eight fast-track countries, Bangladesh, Ethiopia, Guatemala, Kenya, Malawi, Mali, Nepal and Rwanda, will receive
additional technical and management support to quickly implement and learn from GHI’s approach, including integrated programs and investments across the health priorities, fostering greater country ownership and targeting health systems activities that deliver results. These countries will provide enhanced opportunities to build upon existing public health programs; improve program performance; and work in close collaboration with partner governments, across U.S. government agencies, and with global partners.

The CDC Foundation is designated as a financial and administrative steward of funds from the President’s Emergency Plan for AIDS Relief (PEPFAR) that support the creation of public-private partnerships (PPPs) in PEPFAR countries. Currently, the CDC Foundation manages Phones for Health, an innovative partnership comprised of mobile phone operators, handset manufacturers, technology companies, global health organizations and private donors who share the common goal of using the widespread and increasing mobile phone coverage in the developing world to strengthen health systems.

The Phones for Health initiative works to help developing countries in Africa use wireless technology to manage the information requirements of large-scale health programs. Cellular technology offers many advantages – wireless service is often more accessible than hardwired networks in many regions, and wireless devices are portable, relatively inexpensive and battery-powered, making them well suited for use in remote villages with little or no electricity.

In 2010, Hillary Clinton announced the Obama Administration’s Global Health Initiative at the Nitze (Paul H.) School of Advanced International Studies (SAIS).   Click the image to watch the announcement on C-Span.

“In addition to the contributions that Johns Hopkins has made in the fields of diplomacy and international law, I want to add to what Dean Einhorn said about the contributions in health. Hopkins is, of course, home to excellent medical and nursing schools, and home to the Bloomberg School of Public Health. That school’s motto, “Protecting health, saving lives, millions at a time… Hillary Clinton

Aren’t you tired of being lied to and watching our country being looted and destroyed …for what? So that a few technology companies can wire the world – and then enslave all the people in it…