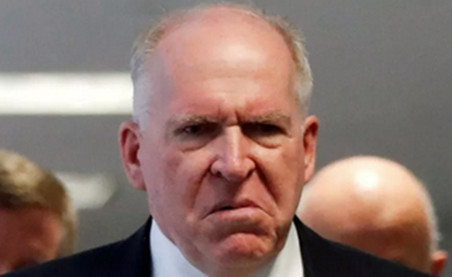 This morning, Epoch Times had a report that said the focus for Russia Gate was shifting to former CIA Director John Brennan.  Brennan according to the report initiated the FBI’s investigation by electronically communicating to the FBI that there were Russian contacts and interactions between the Trump campaign and Russian officials.

My immediate thought was, “Oh No!  They are going to try to hang this episode around the neck of one guy and bury the rest of this global sized pile of poop under the carpet so I went looking for stories I’ve done on Brennan, the FBI, Maureen Baginski, James Comey and many other stories about government systems, networks and information sharing.  The problem is not one guy.  The problem is philosophy and architecture – networked information sharing across agencies, across jurisdictional boundaries and across the globe.

Before the Clinton Administration’s reinvention of government, government agencies maintained their own computer systems and data systems consistent with the mission of the agency.  Data was collected by the agency to meet the functional requirements of the mission.  The IT department of the agency was responsible to ensure the integrity and security of the data collected.  The data stayed within the walls of the agency and was used only for the mission of the agency with information sharing only on a limited basis – extracted from the agency’s databases only for a specific functional purpose.  In other words, very limited integration of information outside the agency where it was collected.  The derisive term for this organization was “stove piped information”.  The new philosophy was that everything should be shared by virtually everybody.

The reinvention of government project flipped the paradigm of information collected for a specific functional purpose to normalization of data in an enterprise architecture.   In the IT world, that means one big computer system with all the data collected for any purpose from any source in one big data base structure with access to the data provided by the data element or set of elements.  That’s kind of getting into the weeds but the point is that the agencies could no longer control the integrity of the data for their functional purposes and they could no longer control access.

The technical considerations with enterprise architecture are not the focus here.  The focus is on the human factors of unleashing IT people – systems designers to integrate and combine processes and data according to efficiency and cost above all other considerations like security, integrity, incentives, etc.  Succinctly, what we have is a systems engineering disaster that manifested as a spy story – Russia Gate and an attempted coup d’etat on our government.  Now when you see the cliche, Information is Power, you should really understand that it means, information IS power and the misuse of it is potentially world shattering.

The core of this story is about telecommunications and human weakness.  I don’t give a damn about John Brennan but at the same time, it’s not fair to hang this global telecommunications disaster around his neck.  The people who are the most guilty are the ones who enabled it.  That would be the members of Congress who sold out to lobbyist pressure to authorize the joining of information systems using telecommunications across boundaries.  The use of the word boundaries is ambiguous and intentionally so because all boundaries are eliminated with information moving at the speed of light over a cable or through the air with authorization provided by Congress.  So if we are going to place blame, let’s go back to where it started because that’s really where analysts need to go to understand how our government became the corrupt police state that it is now.

The story really begins in 1990 with the new transportation system announced by George H.W. Bush and Samuel Skinner but if I go back that far, I will lose everybody before we get to the good stuff so I’m only going to selectively post stories I’ve written in the past that are directly related to the CIA – the FBI and the military.  The new page will be titled Private Networks and Information Sharing.