Home Corruption Facebook is the tip of the iceberg

Yesterday, Frontline finished airing a two-part series on Facebook and incalculable damage that Facebook has done around the world.  It’s not hyperbole to say that Facebook has been a Destroyer of Worlds.   They meant to do it in the sense of using technology to change the world but they didn’t mean to do it in the sense of destroying the world.   They were young.  They developed a computer system but they never gave a serious thought to the potential for harm even as it was being pointed out to them – at least that’s the impression.

Frontline did such a good job on the exposé of Facebook, it seems an opportune moment to point out that our government systems were redesigned by young people who had the very same mindset as Mark Zuckerberg.  They were given license to do it by the Clinton Administration without a single thought to the negative consequences of what they were doing.  The adults went on vacation and the young people took over the house.  The adults didn’t understand the technology nor the power of computer systems but they did understand the profit potential so they turned the young people loose.

“The good news from Washington is that every single person in Congress supports the concept of an information superhighway. The bad news is that no one has any idea what that means.”
~ Cong. Edward J. Markey ~

The Frontline series is the first indication that the adults are beginning to shuffle back into the house to survey the wreckage.

Of course it all began with the dot.com stock market boom.  As Alan Greenspan termed it, irrational exuberance caused it.  The irrational exuberance was because the adults left the building and it was party time.  Internet based online trading platforms were developed, cable network TV hyped the stocks as did the day traders who were communicating on the Internet. Telecommunications companies were laying fiber as fast as they possible could and their tax returns reflected potential future profits rather than actual (accounting fraud).

In 2004, Treasury Secretary John Snow was the guest at a meeting of the National Press Club after the crash.  He gave a status of the U.S. economy.

That $7 trillion dollars didn’t just vanish.  It went into somebody’s pocket.  The guess would be that it went into the pockets of the people who engineered the dot.com boom.  They were not naive about the technology, the power of computer systems or the market.   Only one person went to jail for that $7 trillion robbery.  That person was Frank Quattrone, a Tech Stock Analyst from Silicon Valley.  He was the fall guy while the real criminals got away with the money.  Who were the real criminals?   Businessweek’s list of the Top 25 Power Brokers in 1997 would be a good place to start.   Notice how many of them are lawyers.  And in particular, notice John Doerr of Kleiner, Perkins, Caufield & Byers.

Dubbed the ”human hummingbird” for his flitting among industry moguls, Doerr is perhaps the biggest power broker in Silicon Valley. He has financed such highfliers as Sun Microsystems, Netscape, and Compaq, and hobnobs with Clinton.

So now you know the significance of this picture: 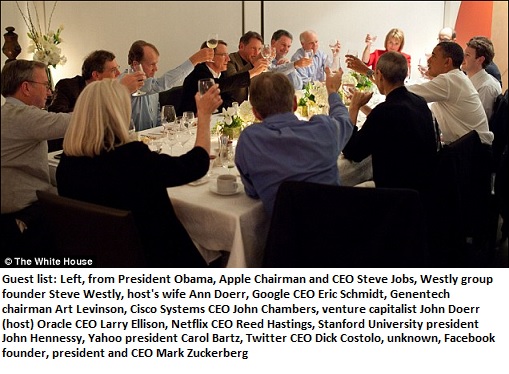 These people plus the ones listed in Businessweek’s list are the Vampires of the Technology Industry and they were the instigators behind the redesign of our government systems with Bill Clinton and Al Gore being the enablers.   And all you have to do is go down the list of catastrophic failures that have already occurred and put them into the category of previews of coming attractions because it’s not over just because the downside of Facebook was discovered by the adults.

Enron – computerized platform for controlling the “power market”.   How much did they steal from utility customers in the west?

Affordable Health Care System –  “market” for health insurance with an underlying system of risk distribution and subsidization based on income information and health status input from the customer and government forced participation for the uninsured.

The above are just a few visible examples of systems redesigned by the Vampires of Silicon Valley who were enabled by corrupt and/or clueless politicians who bought into the marketing hype of razzle-dazzle new thinking:   Don’t bore me with the details.  If it involves technology and it upsets the apple cart, it must be good because the money is coming in supertankers… from the many to the few.

There are too many systems of public administration that have been redesigned with the new thinking to list here not to mention the fact that the ideas are too big, the design from concept to implementation including real world consequences are too much for most people to handle.  Suffice it to say that the story that Frontline told about Facebook is just the tip of the iceberg.  On the positive side, there is a small ray of hope that in view of the consequences of the Facebook system, serious people will begin to really look at our government systems and how they were designed with the same thinking that brought us Facebook and maybe we can begin disaster recovery by unwinding the systems designed by and for Vampires.