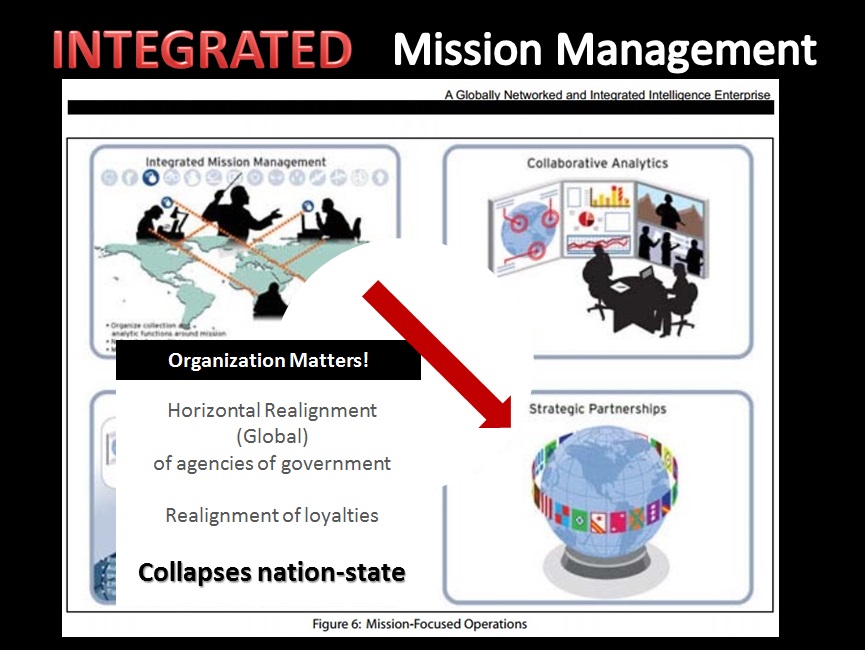 Government within a Government

In 2015, John Brennan, Director of the CIA participated in a panel discussion on 21st Century Intelligence Sharing held at George Washington University.  On the stage with him were his “partners” in information sharing:    former UK MI6 Chief John Sawers, Director of the French Directorate for External Security Bernard Bajolet, and former Israeli National Security Advisor Yaacov Amidror.  The panel was moderated by David Ignatius, Columnist at the Washington Post.  The video that follows is an excerpt from the panel discussion.  The full video can be view HERE.

As near as I could determine from an outsider’s view, the System of Systems is a system that has access information for all other systems that they can tap into.   If you put in a search term into the system of systems query mechanism, the access information for other systems will be used to traverse the world wide web scooping up all information pertaining to the search term(s).  You could think of it like Google except without the advertisements – but with the capability to tap into the backdoor of any other system that has a defined access method.  For example if they put in your name, they would be able to get your medical records, police records, education records, credit information, bank and loan information, current and prior addresses, current and prior marriages, your family information – immediate and extended, your friends, clubs you belong to, property that you own – real and personal, your vehicles, your driving record, bankruptcies, military history, how much you make, how much you pay for utilities – and with the Smart Meter data collection capabilities, they can even extract your daily habits derived from moment-by-moment electricity usage within your home, they can track your movement through your cell phone, they can get your emails – just everything.  This is what Edward Snowden who was employed by Booz Allen was talking about.  It is Total Information Awareness – the ultimate police state information system.

You can read more about Total Information Awareness – the “System of Systems”:

2012 New York Times:  Giving in to the Surveillance State

Total BS Awareness (by Me)

Global Justice Center – headed up by the U.S. Attorney General

Is this an American Department of Justice?

The System of Systems has become the mission and it will smother all of humanity as it seeks to control absolutely everything.

Our political leaders are profiting from the corruption that was required to eliminate all American traditions of freedom, privacy, mobility, economic independence and national sovereignty.

They sold us out.