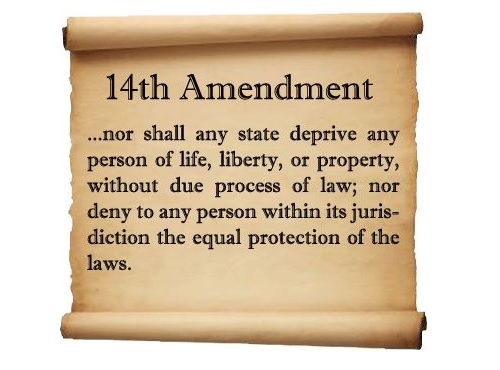 Recently, I came across a history of the 14th Amendment that is written in the Congressional Record.  All civil rights law is based on the 14th Amendment.  The concept of civil rights has been so perverted and contorted as to no longer mean equal rights, rather, it has been used to bestow special rights and benefits upon so-called “minority classes” thereby depriving the so-called majority of equal rights.

According to the history in the Congressional Record, the 14th Amendment was not legally and properly ratified.  If what was written is accurate, I would have to agree.   I’m posting it here so that you can read it and I’d be interested in your comments about it.

The 14th Amendment — Equal Protection Law or Tool of Usurpation

The illegal encroachment or assumption of the use of authority, power or property belonging to another, the interruption or disturbance of an individual in his or her possession

The term usurpation is also used in reference to the unlawful assumption or seizure of sovereign power, in derogation of the constitution and rights of the proper ruler.