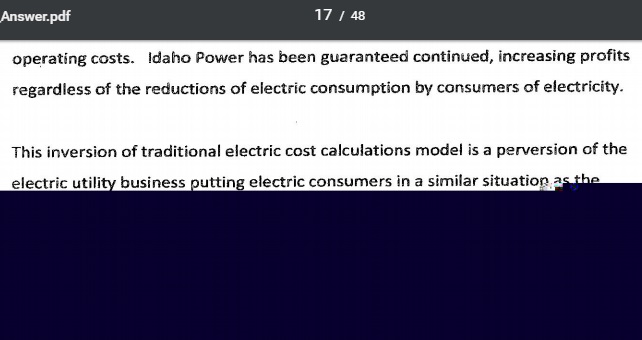 I’VE BEEN REDACTED AND ERASED!

I just found out that something I posted on my website has been redacted.  I’m in shock.  I can’t believe somebody did this.  The feature image above shows the redaction.  The redaction is on Adobe Page 17 of my response to Idaho Power’s Answer to the IPUC Summons on the Complaint.

The following is the text that was redacted:

The rest of the paragraph is:

In 2012, I filed a complaint with the Idaho Public Utilities Commission (IPUC) concerning the forced installation of a smart meter on my home.  I posted my case filings on my new website in 2015.  Several days ago when Mary Baenen contacted me concerning her complaint with the IPUC I started re-reading everything.  Interestingly enough, the Final Order in Mary’s case references the complaint that I filed (IPC-E-12-04).  Bonnie Menth filed a complaint with the IPUC at the same time I did.  They were separate complaints.  The IPUC wanted to combine the complaints because they both were opposing smart meter installations and they were filed at the same time.  Bonnie and I said ok because at the time, there was no reason to believe that the IPUC would act in any other way than with integrity since they were a government regulatory agency.  Needless to say, that was a naive assumption that the IPUC exploited.

The IPUC combined my complaint with Bonnie Menth’s complaint – and now I understand why.  They effectively buried my complaint.  It’s listed on the IPUC website as:

There were actually three files that were modified.  When I uploaded the files, I put them in a special directory – not a wordpress directory.  The following image is the directory where the case files are located:

You can see that three files were modified.  Cloudtech is the godaddy tech support group.  They backed up the three files before they modified them.  Why they did this I have no idea.  I called them to get an explanation which was totally unsatisfactory.  The explanation the customer service rep gave made absolutely no sense given that it was only three files that were modified in a directory that had 12 files and the directory is not a wordpress directory.

I just don’t even know what to say at this point.