Posted By: Vicky Davison: May 03, 2018In: CorruptionNo Comments

Yesterday, an interview of Kevin Shipp with John B. Wells come up on my suggestions list.  It used to be that Wells’ programs were being a paywall except for ones that he considers to be especially important and this interview certainly qualified.  It was so important that I captured an excerpt of it – and for the first time ever, I included a FAIR USE notice.

I’ve listened to several interviews with Shipp because it’s always interesting to hear a former CIA officer talking – especially because they can’t do it without permission.  Shipp claims they went after his family which is why he wrote the book but that doesn’t really square with me because the CIA could have stopped the book and thrown him in jail at any point in the process. 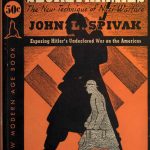 What captured my attention about the interview was that Shipp claims he is a Constitutionalist – but he was involved in training the global police force.  Of course they aren’t really police.  They are soldiers in police uniforms.  They are essentially secret armies.

The clincher though was when he talked about the exposure of CIA personnel working in covert operations in an open source database.   He studied it – tested it and then casually wrote a 20 page report about it that he sent to the program manager “to see what they thought”.   That’s where all credibility with the story ends.  A security breach like that is a five alarm fire – all hands on deck emergency and that would have been true at any shop I worked at in my 20 years in the business and I didn’t even work anyplace where I needed a security clearance.  Data security was always of paramount concern and for people working under cover that would have been especially true.  That database should have been taken down within the hour of discovery – giving the maximum benefit of time considerations in contacting the CIA IT people.

The way Shipp describes how he handled it – and how the CIA responded tells me that the CIA’s IT operations have been compromised.  Who is in control of the CIA IT Systems?   That’s where the locus of control is for the Deep State, Shadow Government, Insurgency, Coup Forces, whatever you want to call them.  It doesn’t matter what you call them really.  The IT Systems are the beating heart of any large organization.  If an insurgent force captures those IT Systems, they have control of your heart’s pacemaker.

Of course I’ve known that our government’s IT systems were compromised for a long time – and it isn’t just the CIA’s systems.  It was also the IT systems of other government agencies and they’ve been robbing us blind.  In one hearing, Robert Mueller testified that $100 million was paid for a new case management system for the FBI.  The system was a total loss because the people who designed it didn’t know what they were doing.  $100 million down the toilet.  If you want to know where the $20 trillion in debt came from – investigate the IT Systems going back to the Clinton Administration.  They “redesigned government”  and by that, they meant that they “redesigned” the systems of government.  That’s where and when the coup d’etat happened – not in 1921.