The Science of Communist Infiltration 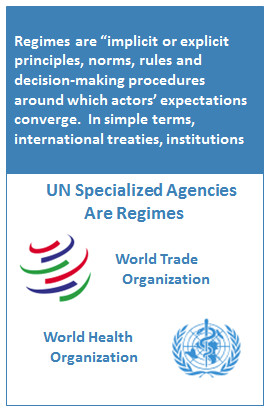 In the article posted a couple of days ago, it was found that the UN Specialized Agencies are characterized as regimes which means that they are established by treaty or international agreement and they are the designated as the keepers and arbiters of the rulesest for the function.  In other words, the specialized agencies are the centers of global governance for the functional area.

Beginning in the mid 1960s, the foreign policy of the United States was to begin an international cooperative effort to establish the United Nations Social and Economic specialized agencies as regimes for global governance.  That’s not how it was billed but that was the purpose as revealed by the history that followed.  To accomplish the mission, the Iron Curtain had to be lifted and the Cold War ended.  Toward that goal, Gerald Ford signed the Helsinki Final Act agreeing to work cooperatively with the Soviet Union and the Warsaw Pact countries with the goal being convergence in policy and the establishment of regimes of global governance.  The U.S. Congress authorized creation of the Commission on Security and Cooperation in Europe aka the Helsinki Commission in Public Law 94-304, June 3, 1976. (Note:  scroll down below the big blank area at the top of these pages).  The purpose of the Commission is to work “cooperatively” on the economic and social “baskets” of cooperation as defined in the Helsinki Final Act.

In writing this article, I noticed something that I missed before.  The headquarters of the CSCE is in Vienna, Austria.   The International Institute of Applied Systems Analysis (IIASA) is also in Vienna, Austria.  I’m absolutely certain there is no coincidence in that because of the timing, the participants and the purpose of both institutions.

The IIASA was established by a charter signed in 1972 between the Soviet Union and the United States.  The negotiations to create the institute began after the assassination of JFK and the funding for it was by money laundered through the National Science Foundation to prevent the American people from knowing that our government was funding collaboration with the communists of the Soviet Union.  Below is a paper written by Jay Hauben on the history of the IIASA working with Soviets on networking and communications.

Across an Ideological Divide: IIASA and IIASANET   by Jay Hauben

Around President Johnson in 1966 were policy advisers3 including McGeorge Bundy.4  Bundy had left his position as Special Advisor to the United States President to be the president of the Ford Foundation but he remained active as one of Johnson’s inner circle. These advisors, while advocating the bombing of North Vietnam, also argued that US interests in Europe and its image abroad would be served by “constructive political, diplomatic and economic initiatives to Eastern Europe and the Soviet Union.”5 Aware of the growing sentiment in Europe in favor of détente, a US National Security Action memo (NSAM) was issued calling for Johnson to “actively develop areas of peaceful cooperation with the nations of Eastern Europe and the Soviet Union . . . to help create an environment in which peaceful settlement of the division of Germany and of Europe will become possible.”6  Offering cooperation in the solution of global problems like pollution and acid rain was expected to be attractive as was “providing Western instruction in …modern management.”

A little less than one year later, from September 24 to 27, 1973 there was a IIASA conference concerned with computers and computing. It was one of seven conferences convened to plan the research agenda for IIASA. It met in the Schloss Laxenberg, by then IIASA’s functioning home. The “IIASA Planning Conference on Computer Systems”15 drew world renowned scientists like Victor Glushkov, the father of Soviet cybernetics and information theory, and John McCarthy, the father of time-sharing computing and an early pioneer in the field of artificial intelligence in the US. The other ten National Member Organizations (NMOs), as the sponsoring science organizations were called, also sent solid scientists.

The organization of the G7 and the Summit process began following the OPEC oil shock when they exercised their monopoly power on oil allegedly creating a global economic shock.  (U.S. oil crisis, 1974).  The leaders of the G7 countries meet to agree to the agenda worked out in private by their respective ministers.  It’s not a coincidence that the G7 was initiated just prior to the signing of the Helsinki Final Act.  It’s pretty safe to say that the agenda items of the G7 become the implementation of the policy prescriptions to meet the goals of the Helsinki Final Act.  It’s also not a coincidence that U.S. trade policy changed from being about tariffs to being about changing our domestic law – robbing the American people of their economy and their system of government by harmonizing laws to enable global governance.

Fast Track authorizing the U.S. President to negotiate “trade deals” that were never about trade – but were about robbing the American people was authorized by the Trade Act of 1974.   The timing suggests that fast track authority was used to implement the Helsinki CSCE negotiated “baskets of cooperation” with the communist countries.

The idea for the first meeting was the initiative of French President Valéry Giscard d’Estaing and Chancellor Helmut Schmidt. In 1975 they instigated the first summit meeting at the Chateau de Rambouillet, 50 kilometres south-west of Paris.

At the summit the heads of state and government of France, West Germany, the USA, Japan, the United Kingdom and Italy discussed the oil shock, the financial crisis and the ways out of recession. At this first G6 summit, they adopted a 15-point communiqué, the Declaration of Rambouillet, and agreed to meet in future once a year, under a rotating Presidency. In 1976 Canada joined the group, which henceforth became known as the G7.     German G7 website

Italy – history of the G7

Notice that in the British history of the G7 that is posted on the MargaretThatcher website, it says this:

Some familiar features of later summits were there from the first, however, such as the careful advance preparation of summit conclusions by emissaries close to heads of government, not all of them officials (later called the “sherpas”, here known as the Carlton Group from the name of the New York hotel at which they first met).

[Note:  I question the “Carlton Group” – it seems more likely that it would be the Carlyle Group because of who the members of the Carlyle Group are – and the amount of money they’ve made from the destruction of our economy and the crippling of our country].

The University of Toronto maintains a website history of the G7/G8 Summits along with Declarations and Documents:  G7 Information Centre

The meetings to look at in particular are:

The “Global Information Society” is a euphemism for global governance by networked telecommunications systems.

Clever aren’t they?   I wonder how many people have died for their cause.