Home Corruption Word Games for Treason in the Open

Word Games for Treason in the Open

The vocabulary word of the day is regime.   In news reports on war activities in the Middle East, the term regime change has been used giving the impression of toppling governments as they did with Afghanistan, Iraq, Libya and for the last several years, the attempt to take out Assad from Syria.

A couple of days ago, I encountered a new term that puts a whole new light on the American government and the perpetual war that is being waged in our names.  The term is  regime theory.   Given that there was a theory associated with the word regime, I thought I should look it up.  It turns out that when the media is talking about regimes, they are talking about definition 2a:

One of the search results for the term regime theory was a powerpoint.  The first slide defines regime theory: 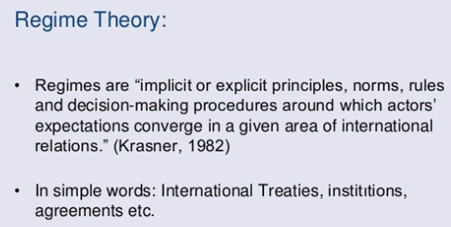 Slide 21 gives an examples of regimes –

So now that we understand what a regime is, we can look at the Five Eyes Pact.  An article on CNN’s website asks that very question in the following article:

What is the Five Eyes Intelligence Pact?

Britain briefly stopped sharing intelligence with the United States about the Manchester bombing after American officials leaked information — a remarkable development between two Five Eyes nations that have the deepest of intelligence relationships.

The US and the UK are two of the so-called Five Eyes — along with Canada, Australia and New Zealand — that share a broad range of intelligence in one of the world’s tightest multilateral arrangements…

The United States and Britain had a smooth intelligence relationship in World War II, and they formalized it after the war with the BRUSA (later called UKUSA) Agreement in 1946.

[Keeping in mind that the Soviet Union was an ally during World War II]   “There was in the United States a creeping realization that maybe the Russians weren’t going to be their friends in the 1950s,” Gustafson said.   As former UK dominions exercised greater sovereignty, Canada (1948) and Australia and New Zealand (1956) began representing themselves in the intelligence pact…

The United States also maintains intelligence-sharing relationships with allies like France, Germany and Japan. In the Middle East, the US formally and informally shares information with several countries in the fight against ISIS and other terror groups. They include Jordan, Egypt, Saudi Arabia, the United Arab Emirates and Turkey, among others…

Helping to make it work: The five nations have similar security standards and classification systems.

Britain late Thursday resumed intelligence sharing in the Manchester investigation. “Fresh assurances” ensure that “we are now working closely with our key partners around the world, including all those in the Five Eyes intelligence alliance,” said Mark Rowley, assistant commissioner of the National Police Chiefs’ Council.

In that article, you can see the evolution of an agreement between two countries during war time to a global regime that not only includes many countries but has also reached down into those countries to include local law enforcement in the intelligence sharing regime.   It should be noted that the national security state was created in 1947 with the National Security Act of 1947.  That legislation created the regime of national security behind a curtain of secrecy in the U.S.

On February 6, 2015, the Guardian reported, UK-US surveillance regime was unlawful ‘for seven years’

There are other articles but the point is that the intelligence community right down to our local law enforcement were and are part of an international regime that governs their activities – NOT THE LAWS OF THE UNITED STATES.  That has to be true because it’s the only possible explanation for the behavior of the FBI and Department of Justice relative to the Congress and the people of the United States.  Information collection where there is no crime and parallel construction using that information to bring down a political adversary would not be the activity of an American law enforcement agency.   An American law enforcement agency would consider anybody who did those things as an enemy of the state.

The Russian collusion story is garbage and by now only people with IQs under 100 don’t know it.  So why is Robert Mueller still there?   And what is he really doing?     Is he actually leading an insurgency – the international security regime embedded within our government?   That would make sense given that he became the Director of the FBI days before 9-11.   And according to James Comey at an Intelligence Summit held in 2014, Mueller was the guy who worked with Maureen Baginski, Armed Forces Communications and Electronics Association (AFCEA) to set up the “intelligence network” to include the Department of Justice and all law enforcement right down to the local cop on the beat with the other leg of it being the Judges, courts, court personnel, etc.   It was a complete capture of our system of justice all enabled by the events of 9-11 for which no investigation was done and nobody was prosecuted.

The question of who is really running our government considering the blatant and un-American activities that we see everyday is more important than merely a passing curiosity.   The system as it appears operates like an invasion of the body snatchers – Americans being thrown out – replaced by internationalists who are destroying the country and waging war on American citizens from within the government itself.

The following is a link to a video of James Comey talking about the FBI as an intelligence agency.  Listen carefully to what he says with consideration for the meaning of regime: