Home Corruption The Art of the Bait and Switch 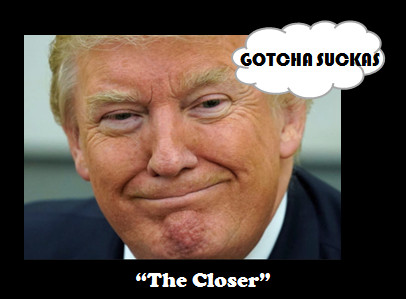 The Art of the Bait and Switch

In 1987, Donald Trump wrote a book titled The Art of the Deal.  It appears now that Donald Trump is going to demonstrate The Art of the Bait and Switch.   I expected it from the moment I heard that Trump was bringing Larry KRUDlow (sic) into his administration.  Years ago I gave Larry Kudlow the nickname of Krudlow because he is one of the most slimy, lying talking heads on financial news networks.   When I gave him that name, it was because all the evidence was that our economy was being destroyed by “free trade” he was cheer leading for it – advocating more of it.

When NBC News wrote about the selection of Krudlow, they called it:  “a bit of a head scratcher”.     That’s a gross understatement.   It’s more like a WTF!

During the campaign, the issue of trade agreements and how our country has been screwed by those agreements was one of the major issues.  Trump was on the right side of the issue – the American side.  NAFTA’s got to go.  These trade agreements were written against American interests.  Tariffs favored our foreign competitors while punishing our manufacturers causing an exodus from our country.  Trump garnered the support of the American people because he stood up for America.  So now – look at the timing of this:

When Trump came into office, one of the first things he did was to say we’re not getting into the Paris Climate Accord and then we’re not getting into the TPP.  About a month after bringing Krudlow into his administration, it was reported that at a Summit of the Americas meeting, the U.S. is considering returning to the 12-nation Trans-Pacific Partnership trade agreement.  The following is an excerpt from the Miami Herald:

TPP moved on without the U.S. Now Trump wants to rejoin the trade agreement, Peru’s leader says Pence told him

LIMA, Peru — Judging from what Peru’s President Martin Vizcarra told me about his private meeting over the weekend with Vice President Mike Pence during the Summit of the Americas, the Trump administration may be more serious than is generally believed about returning to the 12-nation Trans-Pacific Partnership trade agreement.

President Trump made headlines last week when he floated the idea of re-joining the TPP if some changes were made.

Trump says U.S. could rejoin TPP if deal improved. How hard would it be?

SINGAPORE/WELLINGTON (Reuters) – U.S. President Donald Trump said last week he would reconsider joining the landmark Trans-Pacific Partnership (TPP) trade agreement, if it were a “substantially better” deal than the one offered to President Barack Obama.

Do you see what he did?   He stayed out of the TPP long enough so that there could be no negotiations.  It’s the Art of Not Negotiating while retaining plausible deniability.  It is the Art of the Bait and Switch.  It’s the Art of Gotcha Sucka!   Man!  These businessmen are crooked.

Since I’m writing this, I’ll bet the TPP has a reference (inclusion by reference) to the Paris Climate Accord.  That will be the bow that ties up the Treason Partnership Package – TPP.

If case you’ve been sleeping under a rock and haven’t figured it out yet, the “trade agreements” were NEVER about trade.  The agreements presented as trade agreements were actually agreements to harmonize laws so that a global system of governance – communist government could be created incrementally.  Each agreement transferred sovereignty as it transferred the wealth of our nation.  The following is a diagram that shows you the evolution of the “trade theory” for the game of “free trade”.

On April 16, 2018, Alex Newman of the New American was a guest on David Knight’s news program.  It’s with pride that I post this because Newman said that Robert Pastor said that the John Birch Society and Eagle Forum prevented them from sealing the deal on the North American Union.  Idaho Eagle Forum was front and center in the battle at a time when we were all accused of being tin-foil mad hatters.  We all – JBS and Eagle Forum produced so much documentation the traitors could no longer deny it.

A lot of the links are dead but a significant number of them can be retrieved from the archive: