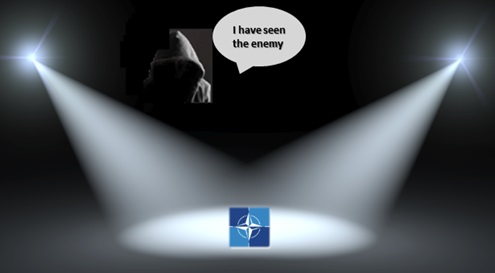 Third Way to the Security Coup

Posted By: Vicky Davison: May 09, 2018In: CorruptionNo Comments

The recent decision by District Court Judge T.S. Ellis concerning the contrived charges against Paul Manafort represents more than just an official acknowledgement of the corruption within the U.S. Department of Justice, it actually opened up a fissure that delineates the two ideological camps struggling for supremacy.  The fate of the nation hangs in the balance.

On one side is the Socialist International with the concept of regionalism, Communitarian law and governance by and through an appointed commission and on the other America as a sovereign nation-state operating under a Constitution signed in 1787 under American law with a government accountable to the people.  Robert Mueller is the aggressor on the side of the Socialist International and Donald Trump is on the side of a sovereign America – we hope.

The North Atlantic Treaty Organization (NATO) was established on April 4, 1949.

The Preamble in the Charter of NATO ties NATO to the United Nations.

The Parties to this Treaty reaffirm their faith in the purposes and principles of the Charter of the United Nations and their desire to live in peace with all peoples and all governments. They are determined to safeguard the freedom, common heritage and civilisation of their peoples, founded on the principles of democracy, individual liberty and the rule of law. They seek to promote stability and well-being in the North Atlantic area. They are resolved to unite their efforts for collective defence and for the preservation of peace and security. They therefore agree to this North Atlantic Treaty…

The idea of collective security and the creation of an unelected ruling European Commission comprised of representatives from each of the governments participating was to prevent war by resolving disputes diplomatically.   Europe was the problem so NATO’s business was on the European continent – until September 11, 2001.  On September 12, 2001, NATO invoked Article 5 of the Atlantic Treaty:

The Parties agree that an armed attack against one or more of them in Europe or North America shall be considered an attack against them all and consequently they agree that, if such an armed attack occurs, each of them, in exercise of the right of individual or collective self-defence recognised by Article 51 of the Charter of the United Nations, will assist the Party or Parties so attacked by taking forthwith, individually and in concert with the other Parties, such action as it deems necessary, including the use of armed force, to restore and maintain the security of the North Atlantic area.

Alignment With the Socialist International

On April 25, 1999, the Democratic Leadership Council (DLC) held an event at the National Press Club to talk about the Third Way and DLC politics. 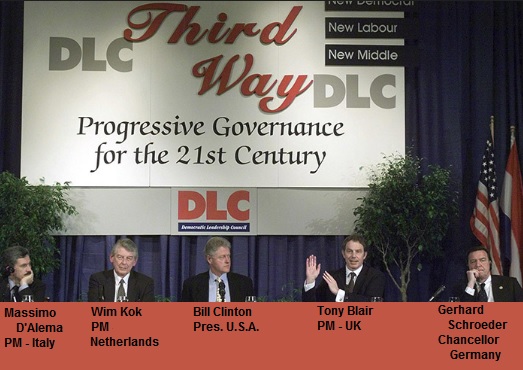 This writer’s definition of Third Way is Tech Fascism.  It’s a political bargain between politicians (left and right), tech industry moguls (money) and the barbarians of the underclass who are used to crush the cultural and social norms of the middle class as the tech industry destroys the economy the middle class depended on.  (Note:  the reason for using the term barbarians is because the perception of most Americans regarding middle class status referred more to adherence to social and cultural norms than it did to income.)

The purpose of going through all of that description of Third Way is because it is necessary to understand the significance of NATO’s adoption of Third Way.  On May 1, 1999, the Democratic Leadership Council had posted on their website, an article about the DLC meeting on April 25, 1999 described and linked above and NATO’s New Role with respect to the Third Way.

Our cover story in this issue of The New Democrat is devoted to Europe’s growing embrace of the Third Way, the American-bred governing philosophy for a global Information Age. In late April, the leaders of Britain, Germany, Holland, and Italy joined President Clinton and the Democratic Leadership Council in Washington for a extraordinary public conversation about the Third Way movement’s meaning and direction on both sides of the Atlantic.

The four European leaders who attended the DLC forum were in Washington on other business critical to the shaping of a secure and prosperous 21st century. They and the other national leaders here for events commemorating the 50th anniversary of NATO had little opportunity to celebrate the most successful military alliance in modern history or its expansion to include former Warsaw Pact nations. Instead, NATO’s 19 heads of government were forced to spend their time together shaping the alliance’s post-Cold War mission as its forces engaged in a hot war in the former Yugoslavia.

The decisions taken at the NATO summit have implications that go far beyond the alliance’s intervention in Kosovo. All NATO members, large and small, explicitly accepted a new role for the alliance in using force to uphold civilized norms of behavior in Europe. Whatever the outcome in Kosovo, the United States and its European allies have modernized NATO’s purpose to meet a new common threat.

Leading up to the 50th Anniversary of NATO, there was discussion in this country about whether or not to continue participation in NATO.  NATO was created in the wake of World War II to protect western Europe during the rebuilding and the process of building the European Union.  By 1999, those missions were finished.  Germany was reunified and the Soviet Union no longer existed.  The only problem in Europe was in the Balkins.  Slobodan Milosevic was the leader of Serbia.  The history is too complex to summarize.  Suffice to say that Milosevic was accused of war crimes and NATO was waging a bombing campaign against them.

Madeleine Albright was the Secretary of State at the time of the NATO bombing of the Balkins.  On April 6, 1999, she spoke at Brookings Institute on the future of NATO, the bombing of Serbian forces, refugees, and how there needed to be peace for there to be a “free and open” Europe.  The problem is that the Balkans are the gateway to Europe from the Middle East.

Keep in mind that on September 11, 2001, Continuity of Government was initiated and on September 12, 2001, NATO invoked Article 5 of the North Atlantic Treaty.

Related:  The Grand Chessboard of the Trilateralists

P.S.  Nearly forgot to mention that Slobodan Milosevic died in prison but after his death it was found that he was not guilty of the war crimes that he was charged with.  It was discovered that the U.S. State Department hired a mercenary group named MPRI and MPRI was owned by L3 Communications.  MPRI was hired to give military training to the Croats who were fighting with Milosevic.  It may be a coincidence but L3 Communications was just across the road from the Branch Davidian estate in Waco.  Just saying…