A couple of days ago, President Trump announced that he was withdrawing American soldiers from Syria.  Isn’t it ironic that despite the toxicity of our public debate, many republicans have joined the democrats in opposing this move by Trump.

Trump is right though.  We shouldn’t be in the Middle East at all.  The Middle East was a trap set for the United States at the turn of the new millennium by the United Nations, the Saudis and the socialist British government of Tony Blair.  If you go back and look at the reports and the documentation on the Millennium Summit, you’ll see that the UN effectively declared war on nation-states to reach the goal of global governance under a regional system to replace the nation-state structure.  Why do they want to replace nation-states?  Obviously because the UN system is a rival system of legal organization and governing. 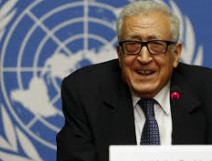 Here is a video of a statement by Tony Blair at the UN’s Millennium Summit in September of 2000.  Tony was a member of the Socialist International.  Notice that he mentions the Brahimi Report named for the Chairman of the Panel on Peace Operations, Commission Lakhdar Brahimi,

Report of the Panel on United Nations Peace Operations,  UN Docs A/55/305

Now here is a video produced by The Guardian about Tony Blair and his statements about WMD in Iraq and his mea culpa years later when it became known that evidence of WMD was fabricated.  The reason for the lies wasn’t known, but it seems clear to this writer that Blair was acting on behalf of the Socialist International and the United Nations with the Brahimi Report being the plan for “new security” – global policing under the UN system.  It was a trap for the United States to be permanently at war in the Middle East for the United Nations.

On April 25, 1999, Bill Clinton and the DLC held a conference on Third Way.  Third Way was Clinton’s label for the agenda of the Socialist International’s “new governance model” – technology based.  The leaders of the United Kingdom (Tony Blair), Netherlands, Germany and Italy were in attendance.

The Socialist International defined the New World Order and the new millennium was the kick-off for the run to the finish line.